While you may think Croatia is only a summer destination, the inland capital of Zagreb is one of the most underrated winter destinations in Europe. The annual Advent Zagreb draws thousands of Croatians from around the country, and brought home the title of Best Christmas Market in Europe by European Best Destinations for three years in a row. However, this winter city break is still vastly undiscovered compared to other Christmas markets like Berlin and Prague.

Zagreb is known for its funky and laidback vibe, and this character comes to life during the advent festival. Of course you have the traditional hot wine and sausages as well as ice-skating under a canopy of twinkling Christmas lights. Yet, the added touches of retro decor and interactive holiday displays are what makes this festival stand out amongst the crowd.

Zagreb Advent, also known as the Zagreb Christmas market, is an annual winter festival with various holiday celebrations throughout Zagreb. The festival takes place every year from the end of November through the middle of January. The most popular time to visit Zagreb’s Advent is around Christmastime, though many come for the New Years celebration as well.

There are also several other cultural events that take place every year around Christmastime. You’ll find performances at the Croatian National Theatre, workshops, community events, and more. You can find out more information about these events when they are released here.

The Zagreb Advent Festival 2020 goes from November 30th through January 7th.So far the festival will still be running as usual even with Covid-19, likely with social distancing in place.

Every year, the Zagreb Advent has a particular theme for the Christmas festival. In years past, these themes were A Christmas Carole and the Nutcracker. These themes were displayed throughout the various Christmas Market locations, especially the main square and the Gric tunnel.

Zagreb is divided into Upper and Lower Town, with the main Ban Jelacic Square in the epicenter of the city. Upper Town provides the best panoramic views of the city and the best retro decorations that the Christmas Market is known for. Lower Town has the largest attractions, such as the ice skating rinks, larger parks with live music, and many more vendors selling trinkets.

READ MORE:   Why You Should Visit Budapest During the Holidays

You can easily see the main attractions in Zagreb’s advent within one day. However, two days will allow you to split up your time with ease, making the city an ideal winter weekend city break in Europe! 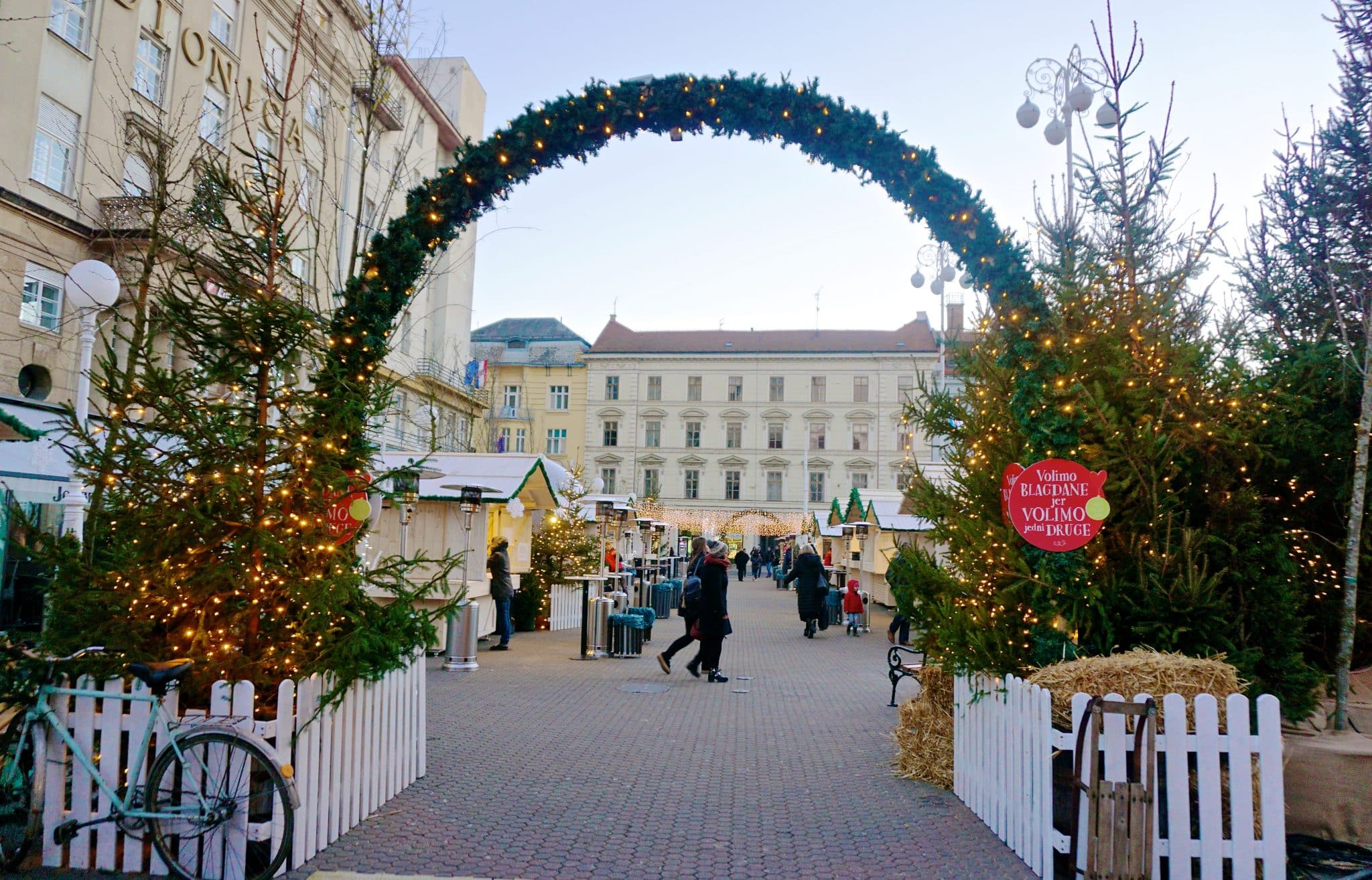 In the heart of Zagreb you’ll find yourself at Ban Jelacic Square, one of the main Christmas markets spots at Zagreb’s Advent. During the holidays this area features a massive Christmas tree and tons of other festive decorations. There are tons of wooden huts selling hot drinks and food, plus local vendors selling trinkets. Many of the main live music performances are in this main square as well.

Alternatively, there are a couple other less crowded areas on the side streets surrounding Ban Jelacic square. If you’d rather sit under an outdoor heater at a coffee bar, check out some of the cafe bars along the smaller roads. There are options going into both lower and upper town!

From Ban Jelacic Square, make your way into Upper Town to experience the iconic St. Mark’s Church, known for its detailed tile work representing the colors and symbols of Croatia. This Church dates back to the 13th century, and displays the “Coat of Arms” that represent distinct regions of Croatia. On the left represents Kingdom of Croatia, Slavonia, and Dalmatia, and on the right is the city of Zagreb.

While there aren’t any on the wooden houses in this area, it is beautiful to see the Christmas tree and lights with the colorful church as a backdrop. There are often horse buggies and vintage cars driving around this area, and it makes it feel all the more out of a Christmas storybook! 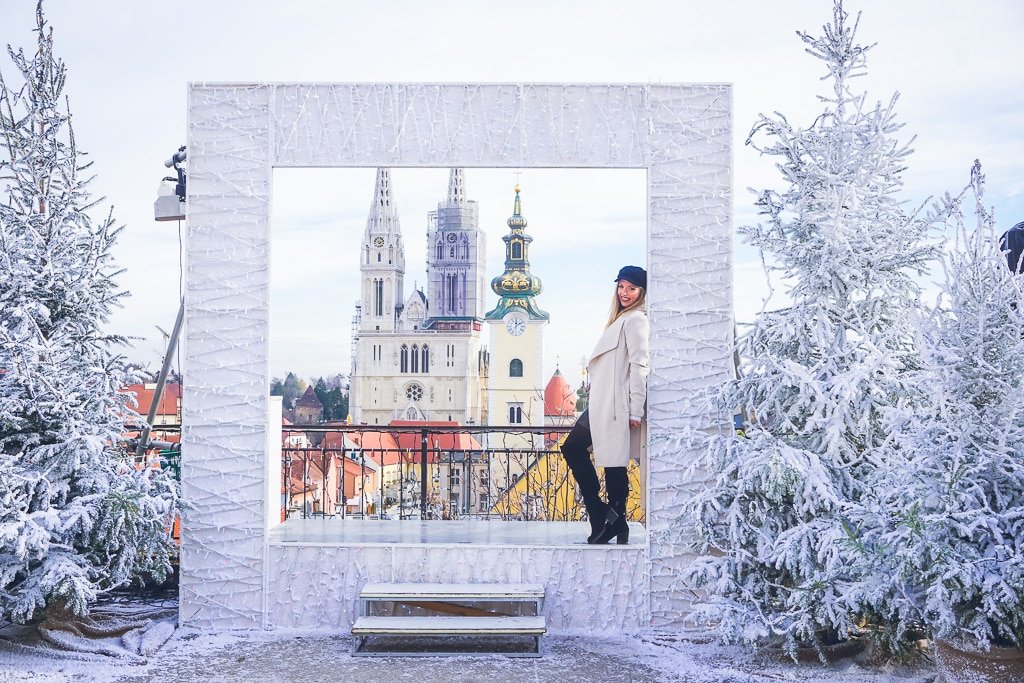 Klovicevim Dvorima is known for having the best view of the Zagreb Cathedral. Naturally during the Zagreb Advent festival, this area turns into a winter wonder land. Every year the festival sets up a photo display, something similar to the above, surrounded by faux snow and pine trees. Usually there is a couple other festival backdrops in this area as well, which definitely makes it an ideal spot for the ‘gram!

You’ll also find wooden houses selling drinks and a couple of food trucks. At night there is live music here, with plenty of tables with sitting or standing options, while taking in one of the best views in the city! 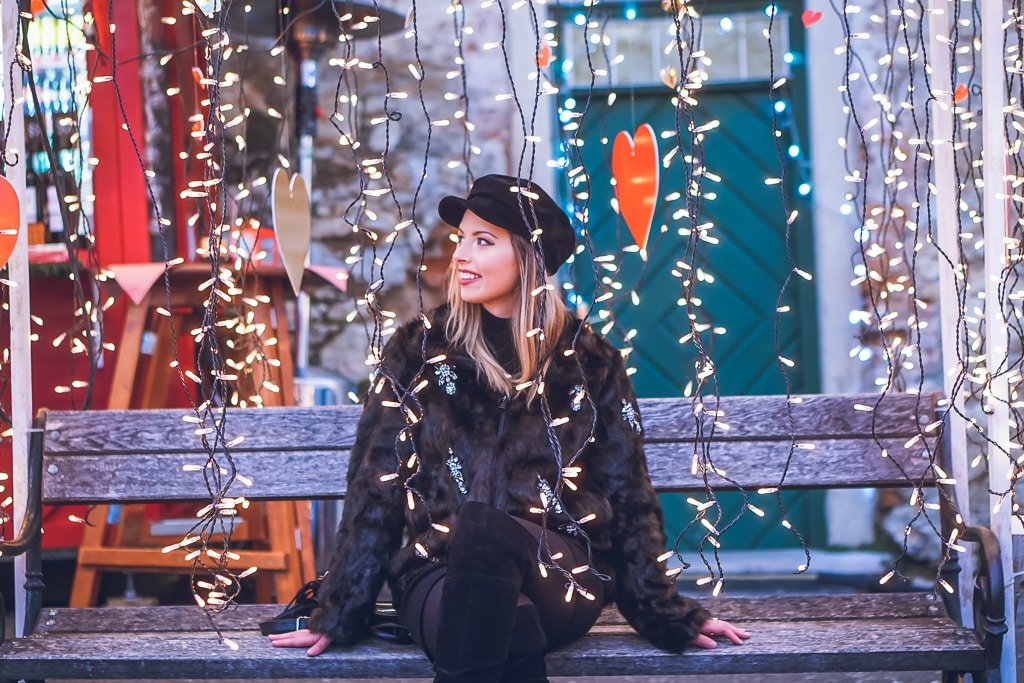 Just down the stairs from Klovicevim Dvorima you’ll land in the heart of Caffe de Matos, the most eclectic area of the Advent in Zagreb.  Trees are draped with a string of light bulbs and vintage ice skates. Paisley rugs and juxtaposed next to vintage bikes and decorated coca cola bottles. And of course, the entire area is full of wooden huts selling hot wine and local sausages from the Slavonia region of Croatia.

I have to say that this was my favorite area of Zagreb Advent, because you can really feel Zagreb’s character and retro charm. The atmosphere is always chill and laidback, and it feels so cozy and romantic with live music playing at night. Not to mention, you’ll find more panoramic views of the city from here! 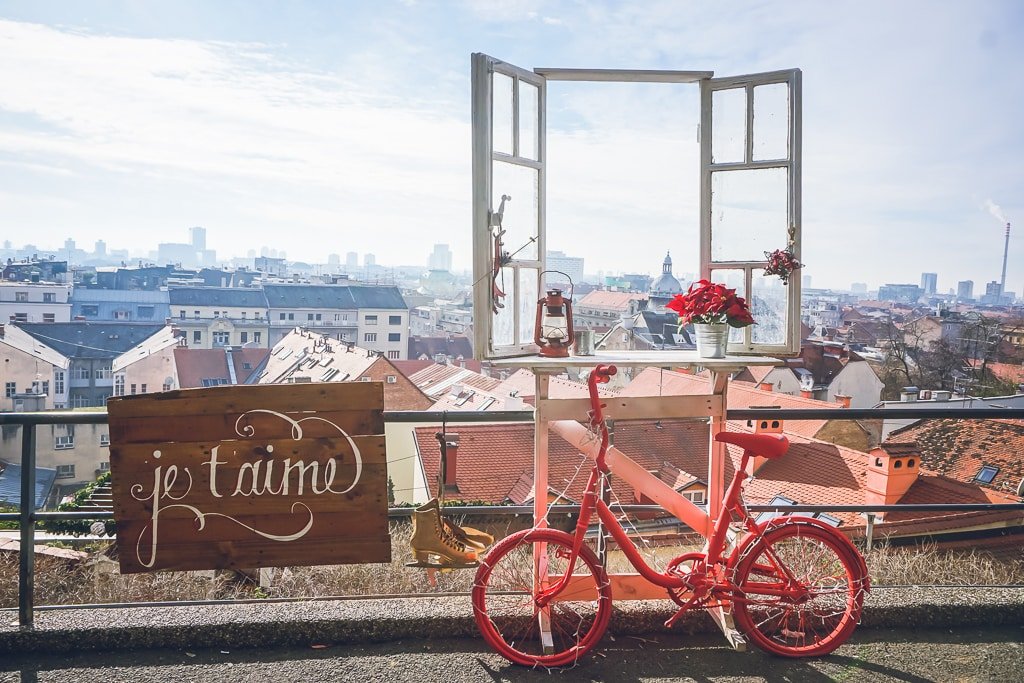 If you walk a little bit down from Klovicevim Dvorima you’ll find yourself at the Straossu area of the Advent. This has more areas to sit and sip hot wine, and quiet spots along the walkway looking over the city. There are usually interaction Christmas displays here for children, such as a giant Santa Sleigh and play areas for children to run around.

You can also look over the city by climbing the Lotrscak Tower nearby, or take the cable car down to Illica, the main street running through Zagreb’s City Center.

The Gric Tunnel in Zagreb takes the cake for being the most unique attraction within the Advent in Zagreb. The tunnel goes underneath the historic Gric neighborhood, and was used as a bomb shelter during WWI. Today, it’s used as a walking tunnel, and it’s decorated each year with the Zagreb Advent theme.

In year’s past, the tunnel’s themes were A Christmas Carol and The Nutcracker. As a die-hard Nutcracker fan, I was so impressed with the tunnel. While only a portion of the tunnel is decorated, it’s still fun to walk through. It’s also a great activity to do with kids!

It’s easy to miss this spot if you aren’t looking for it. However, as you make your way from the main square into lower town, you’ll want to turn onto the street next to the A1 Centar Mall. Then, right in between the Znjanje Bookshop and the Boban Cafe, you’ll find this illuminated passageway that takes you to a secret square.

While the tunnel itself isn’t that long, it is a magical, hidden gem of the Zagreb Advent. It makes for a great shot for the ‘gram, or just a romantic moment with your partner as you explore the city.

If you follow the road of twinkling trees, you’ll find yourself in the best place for live music in Zagreb. While the music around Ban Jelacic square is usually more upbeat for a younger crowd ready to party, music in Zrinjevac Park is more in the genre of acoustic covers of holiday classics.

The area also sells a lot of souvenirs, and of course, more wooden houses with hot wine, drinks and food. This is definitely an ideal romantic date-night spot, and It’s truly 10 times more beautiful in person.

Scattered throughout lower town, there’s several other advent hotspots along the side streets, such as the Advent in European Square. However, if you follow the crowds you’ll see that most people are making way for the Ice Park in Ledeni Park. The area has an ice rink and then an entire ice skating circle around the perimeter of the park. For only 40 kunas each (about $5), you can rent ice skates for one hour.

Above you can see that each of the attractions mentioned above are on this Google map. You can share or download this offline so you always know where to find these spots. You can also create your own self-guided walking tour with this! Enjoy 🙂

Other things to do in Zagreb in winter

For full disclosure, Zagreb is my favorite capital city in Europe. The city’s quirky yet elegant character is vastly underrated. The modest prices make most budget-friendly European cities seem expensive, and is a more affordable alternative to Vienna.

And if you ask any Croatian, they will also attest that December and early January are the best time to visit Zagreb. The growing Advent Festival draws in a larger crowd of foreigners each year. However, there are plenty of other things in do in Zagreb in winter if you decide to come in January-March as well!

Relish in the Coffee Culture

Winter is also one of the best times to experience the “coffee culture” in Zagreb. Unlike other fast-paced capital cities in Europe, Zagreb moves at a slower pace. Locals sip lattes at funky cafe bars with friends, usually no laptops or smart phones in sight.

While many café bars in coastal Croatia close their doors during the winter, Zagreb adapts to the season. People gather under heat lamps, or sip hot chocolate in faux fur blankets. You could spend a week in Zagreb finding the cutest coffee shops around the city alone.  Some of my favorites are Sjedi 5, Velvet, and Vis a Vis.

If you’re looking for the by far the best view looking over the city, you’ve got to be willing to take the climb! Head to the top of the Lotrscak Tower for a 360, panoramic view overlooking all of Zagreb. The Tower dates back to the 13th century, where it helped guard the city gate overlooking the town. It is considered to be one of the best preserved buildings of Zagreb’s defense systems.

The “canon” goes off every day here exactly at noon, which has been a tradition for over 110 years! The entrance to climb the tower is around 30 Kunas, and is well worth the price to see the views from up top.

See a movie at the Boutique Cinema

One indoor attraction you have to experience during winter in Zagreb is the Kaptol Boutique Cinema. This boutique movie theatre is equipped with a cafe bar and restaurant, with eclectic decorations and chill music. The cinema plays many movies in English, and the seats are spacious enough so that you can spread out. In fact, some of the cinemas actually have small sofas that you can spread out on.

Even if you don’t want to see a movie, head to the cafe bar inside for a tropical atmosphere on a cold day. The lush foliage and checkered tiles makes you feel like you’re somewhere in Bali!

For other recommendations, check out more on things to do in Zagreb.