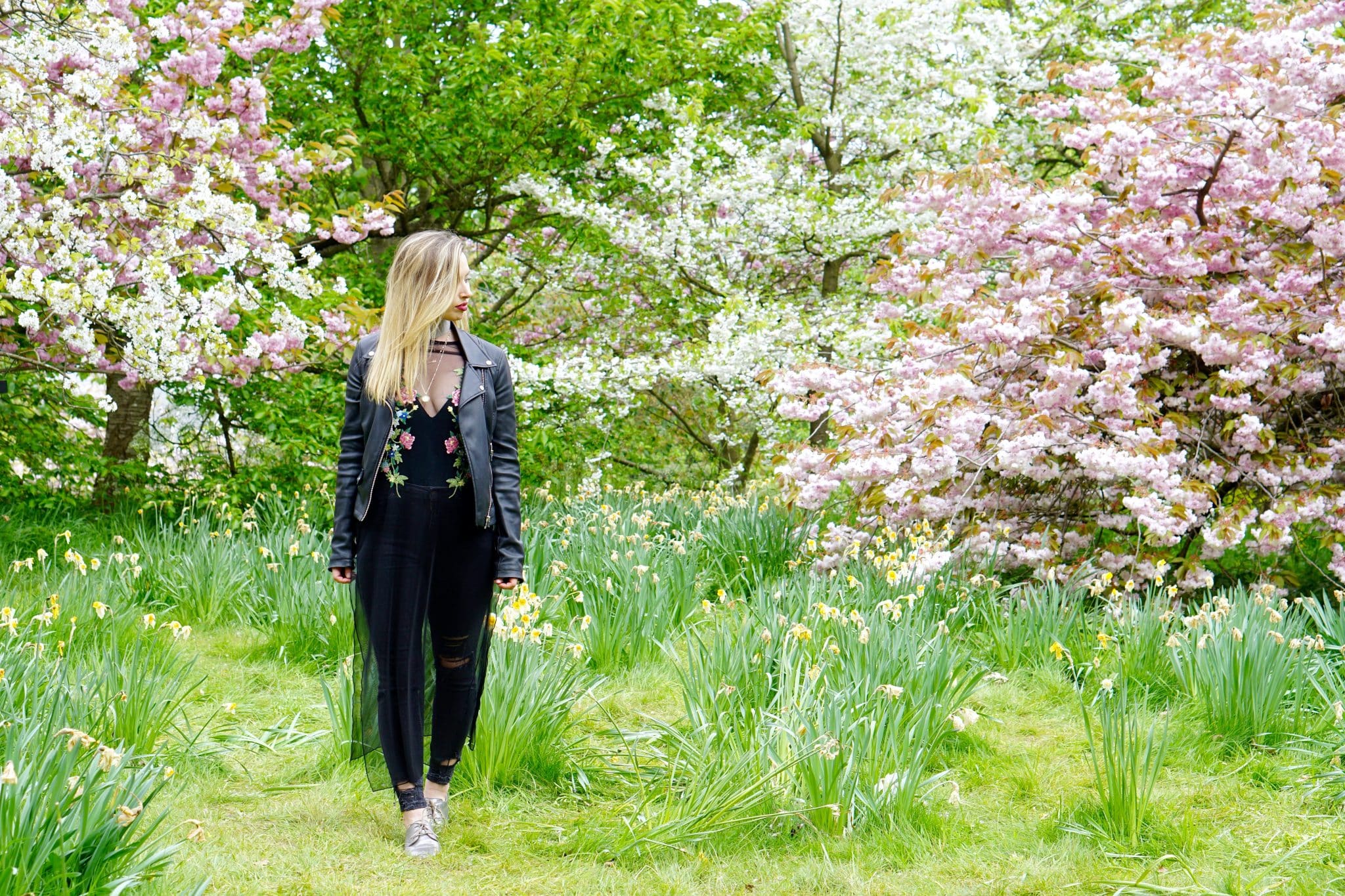 What was at the top of my list while visiting London? No, it wasn’t to see the Big Ben or to sit atop the London Eye. I was determined to see enchanting fields of cherry blossoms and cacti-filled conservatories.

Tucked outside of London’s city center, the Kew Gardens are an oasis of blooming flowers, exotic foliage, and fresh air. This UNESCO heritage is where beauty meets a longstanding commitment to conservation and climate action.

Safeguarded by locals and overlooked by masses of tourists, there’s no doubt that The Kew is London’s best-kept secret (garden). 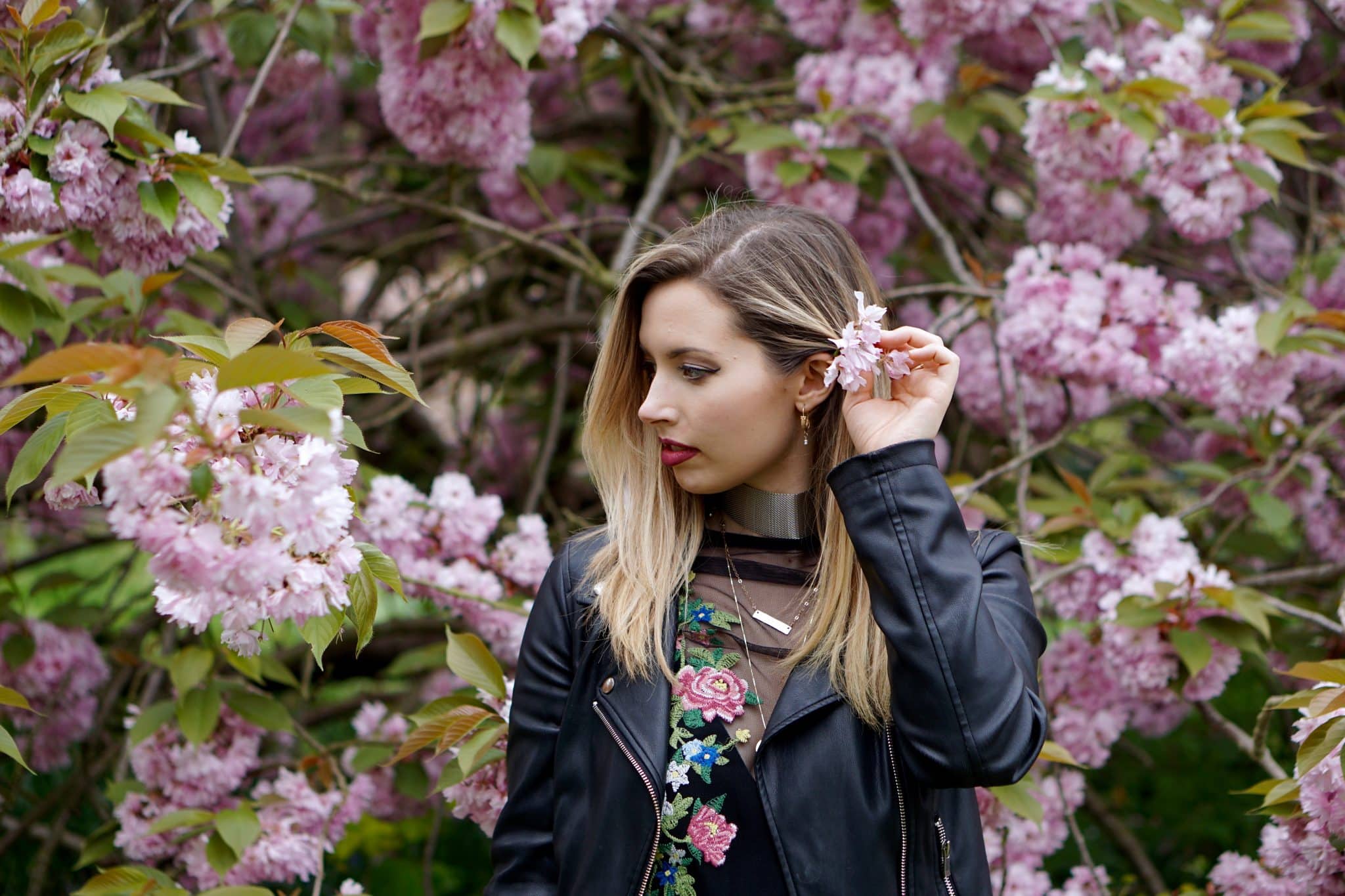 Kew Gardens are the largest UNESCO heritage site in London, stretching over an area of 1.2 kilometers. Kew Gardens has over 14,000 types of trees, 30,000 types of plants, and 90 dedicated attractions.

Though the park is located 9 kilometers outside of London, a short tube ride takes you away from London’s crowds and into the heart of a spacious sanctuary. It’s without a doubt one of London’s best hidden gems!

Here are the top highlights of the gardens: 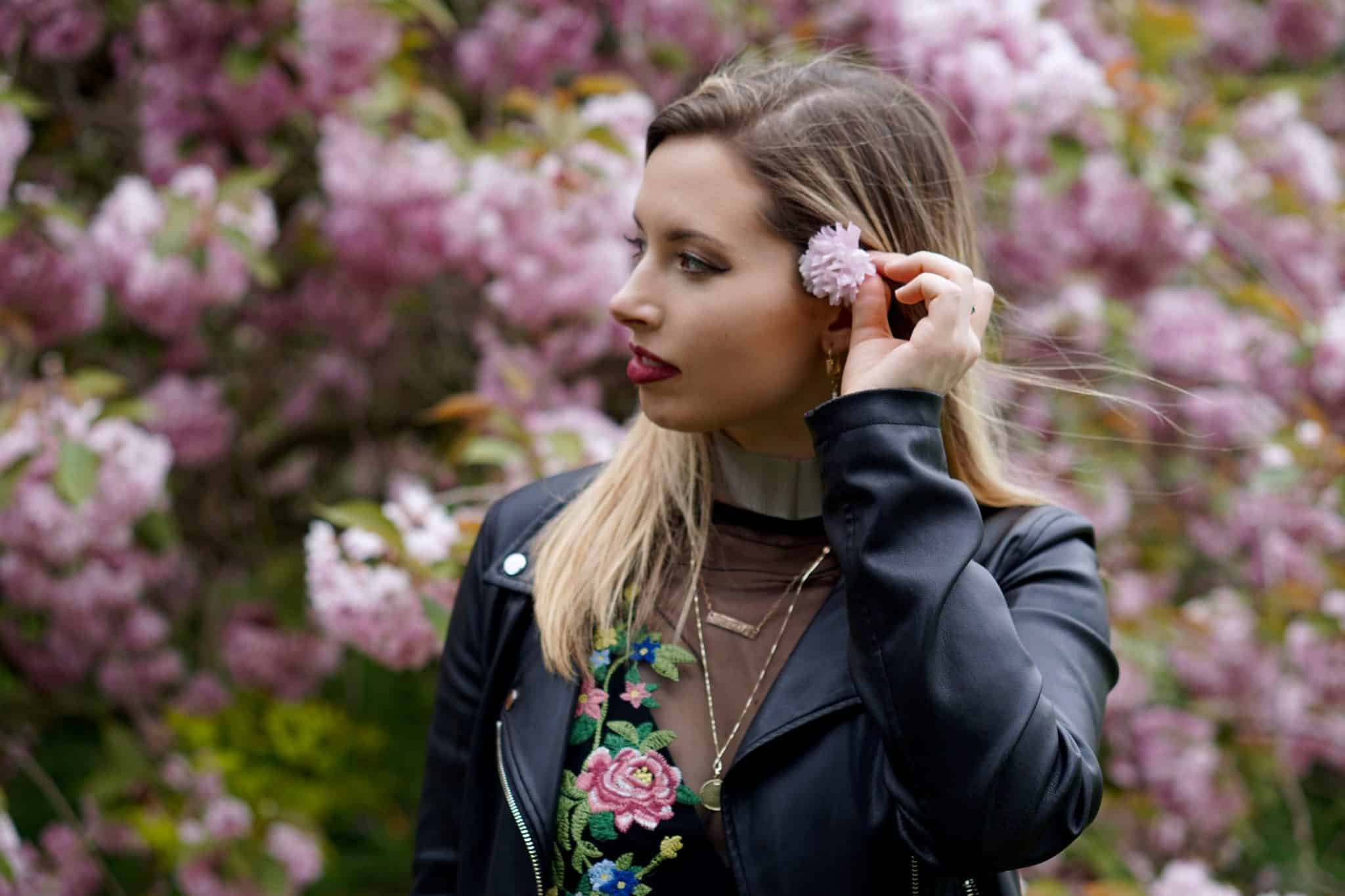 I’ll admit, the cherry blossoms are what originally brought me to the Kew Gardens in the first place. The park is decorated with budding blossoms and bushes like Mother Nature’s overflowing cotton candy machine. To say that I was in my element of mermaid fairy goddess would be an understatement. 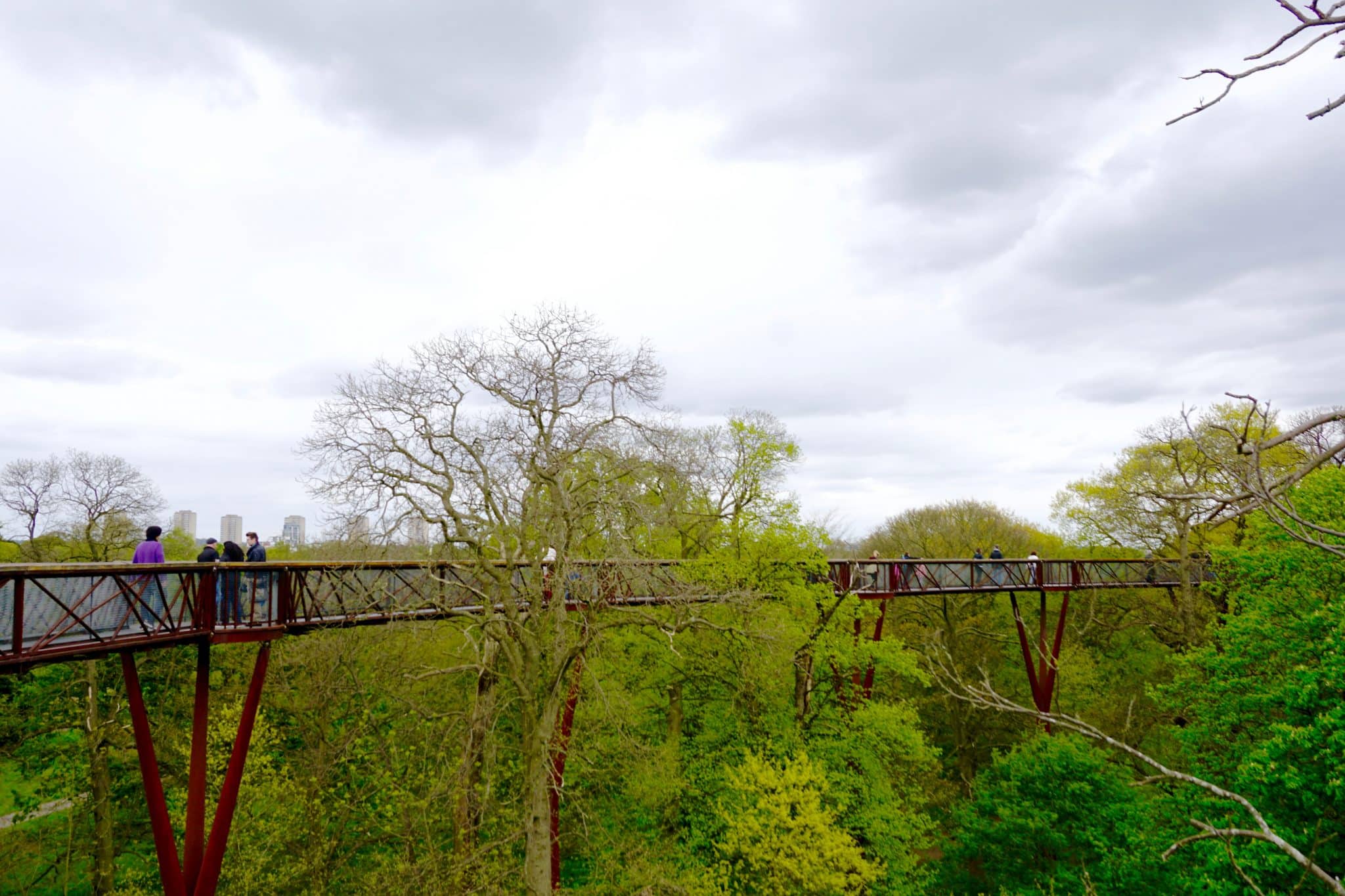 Now, this is perhaps one of the most unique attractions at Kew Gardens. If you’re a little afraid of heights like me, it’s also the scariest. In the middle of the park, sits the legendary treetop walkway. It perches atop branches and you can even see downtown London in the distance. It only takes about 15 minutes to walk through the entire walkway. We went on a windy day and the entire walkway was swaying in the wind! We literally had to hold on, which apparently is totally normal. It still was one of the coolest things I’ve ever done. 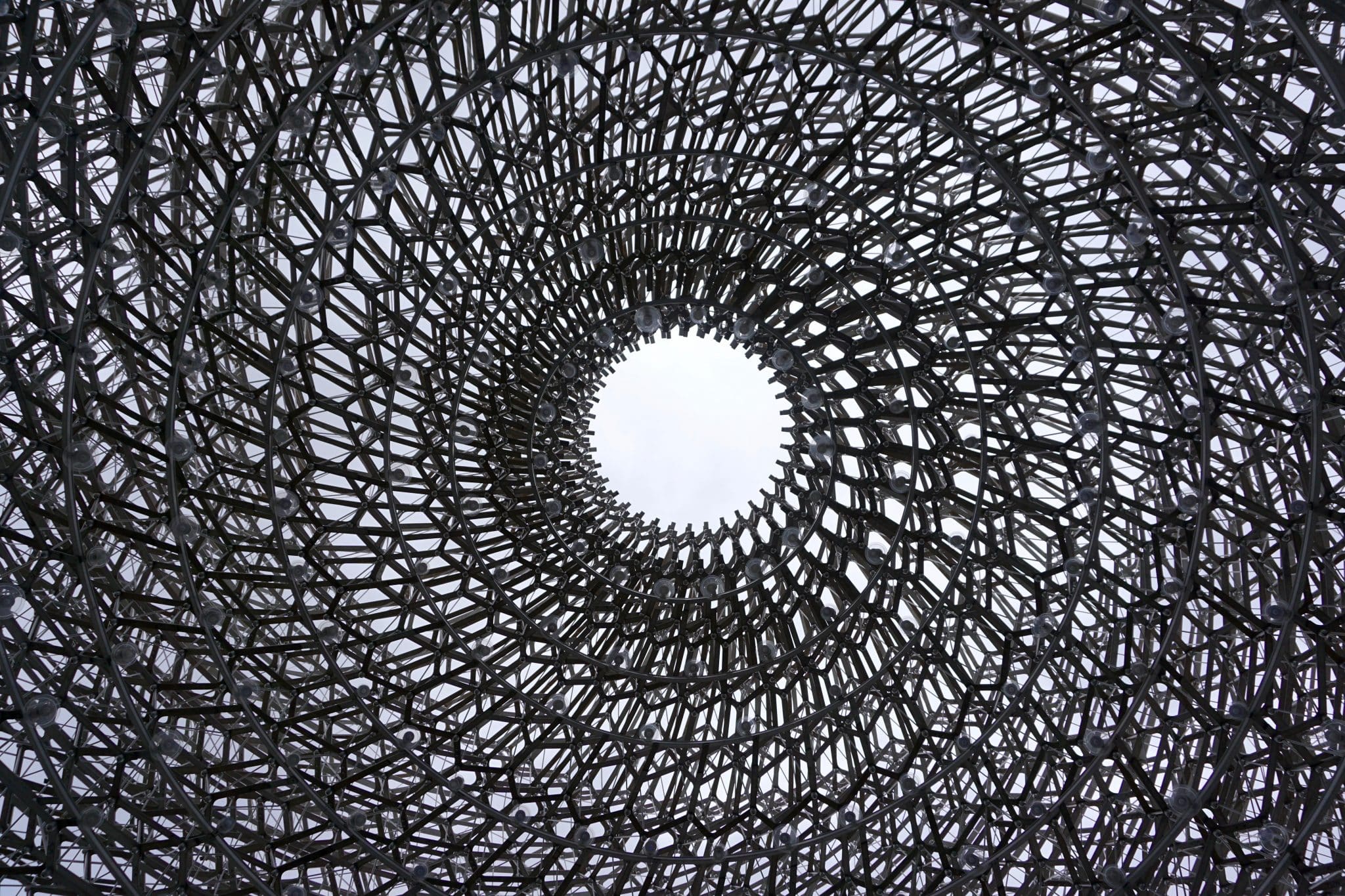 What’s that in the distance that looks like a metal dome? That’s what Kew Gardens has named, the Hive. Illuminated by nearly 1,000 LED lights, the Hive is an artistic structure that represents a beehive. It’s intricate detail gave me all the feels about the importance of our pollinators, and even a bit sad about colony collapse disorder #savethebees. 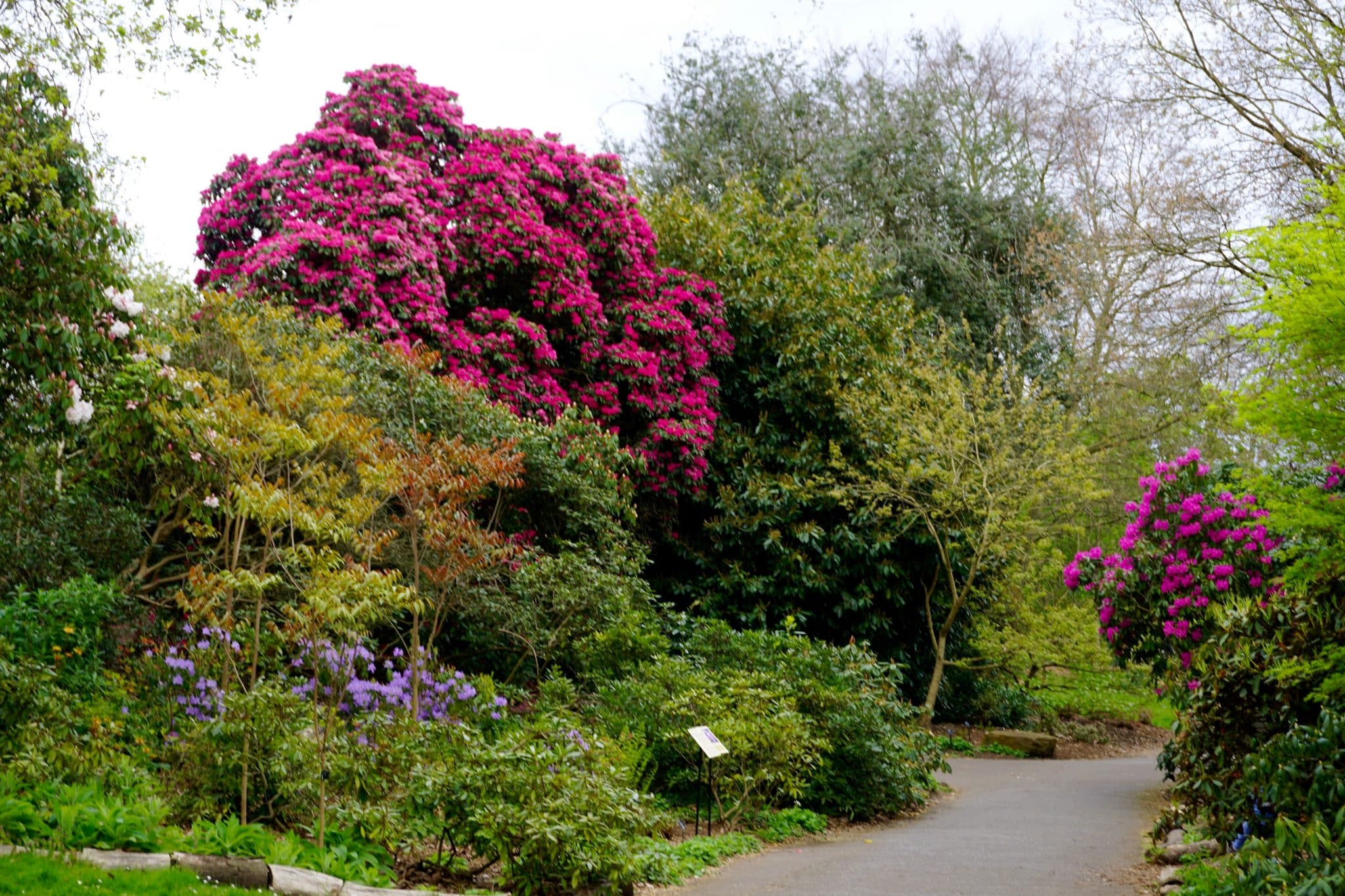 As eloquently put by Kew.org itself, “Kew’s arboretum is a living library of over 14,000 trees, many of these specimens dating back to the 18th century…” There’s even a few parrots flying around in the trees, and I’m not exactly sure how they got there. 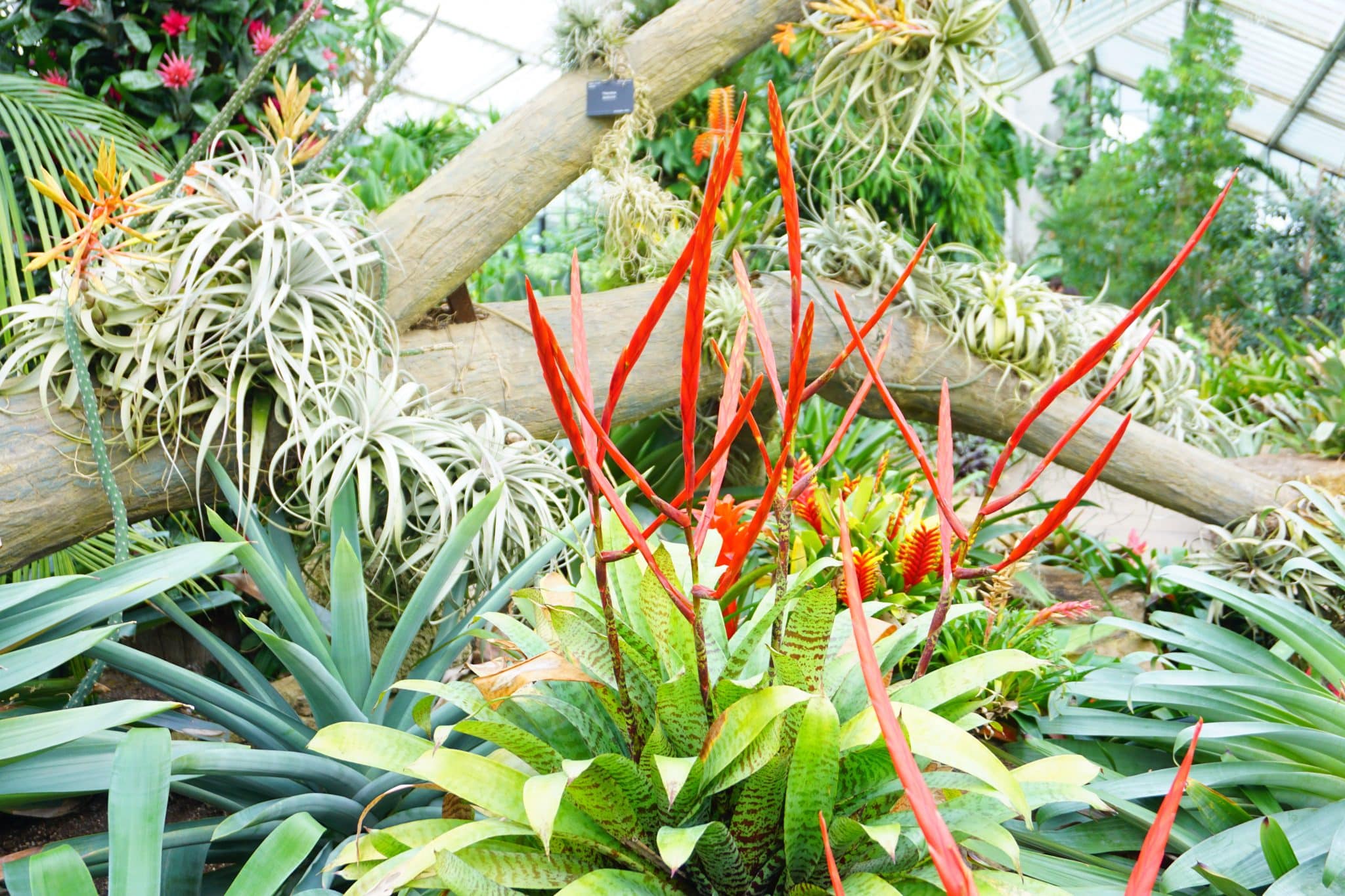 Enter the palm room and you’ve stepped into a tropical rainforest climate. Palm trees and too many tropical species to name, this is the most exotic part of the Kew Gardens. 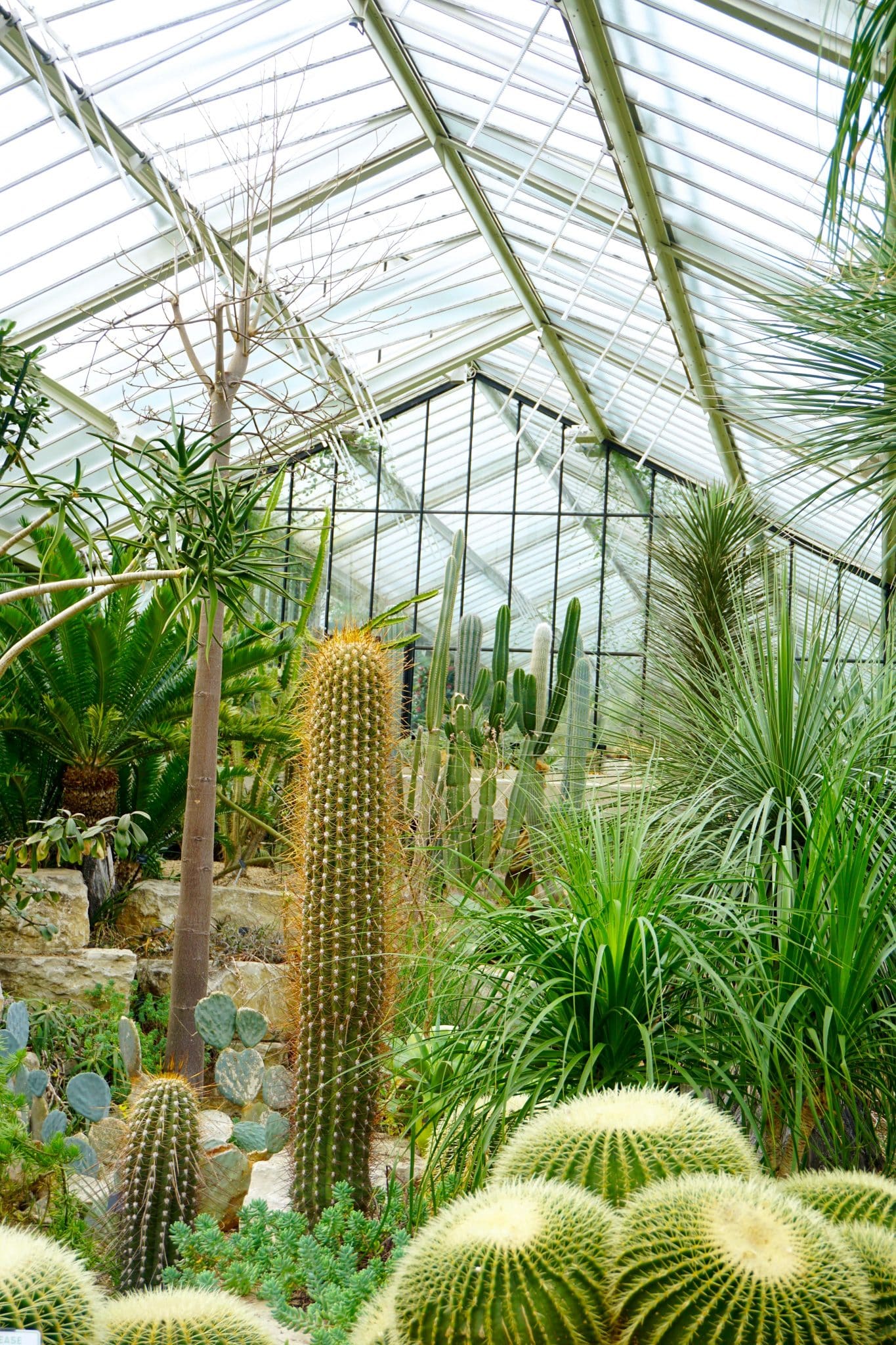 Raise your hand if you have a thing for succulents? Well, than the Princess of Wales Conservatory will be heaven on earth. This cacti haven was opened by Princess Diana in July 1987, which makes it all the more special.

A Commitment to Climate Action 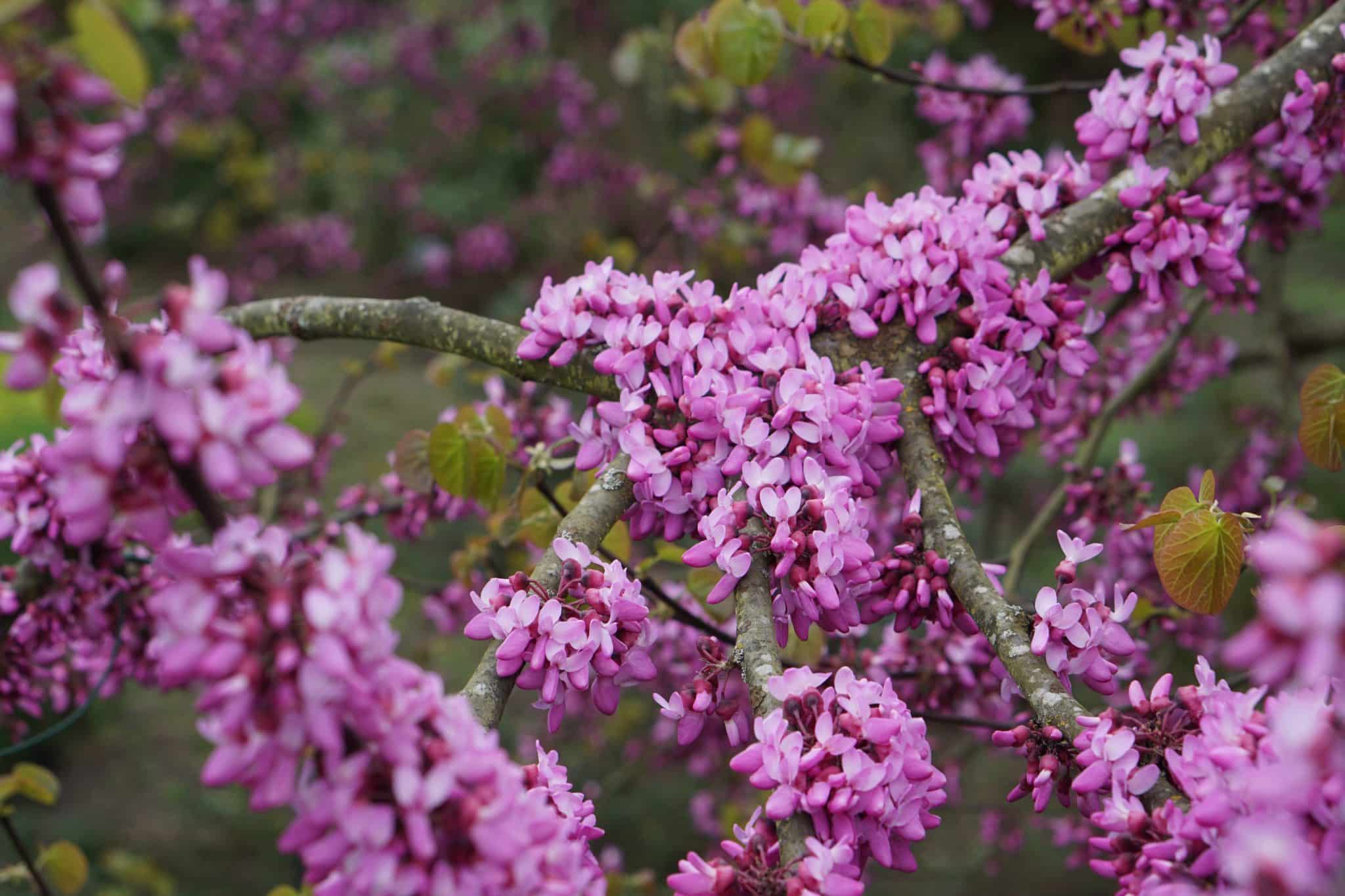 Despite having terrible seasonal allergies, I felt like I could finally breath again upon arriving at Kew Gardens. For a city the size of London, green spaces like the Kew Gardens are crucial.

Secondly, Kew Gardens is also a global resource for plants, fungi, and climate. From numerous research initiatives to ambitious policy work, Kew’s scientific network spans over 110 countries and in loves over 400 worldwide institutions.

Clearly, Kew Gardens is paving the way for a more sustainable London, and an eco-conscious future.

If I could camp out and live in these gardens, I would.

When to visit Kew Gardens

I don’t think there’s a bad time to visit the Kew, as there are both outside and indoor attractions at any time of the year. However, I loved visiting in the springtime, because many of the flowers were blooming including the cherry blossoms.

How to get to Kew Gardens 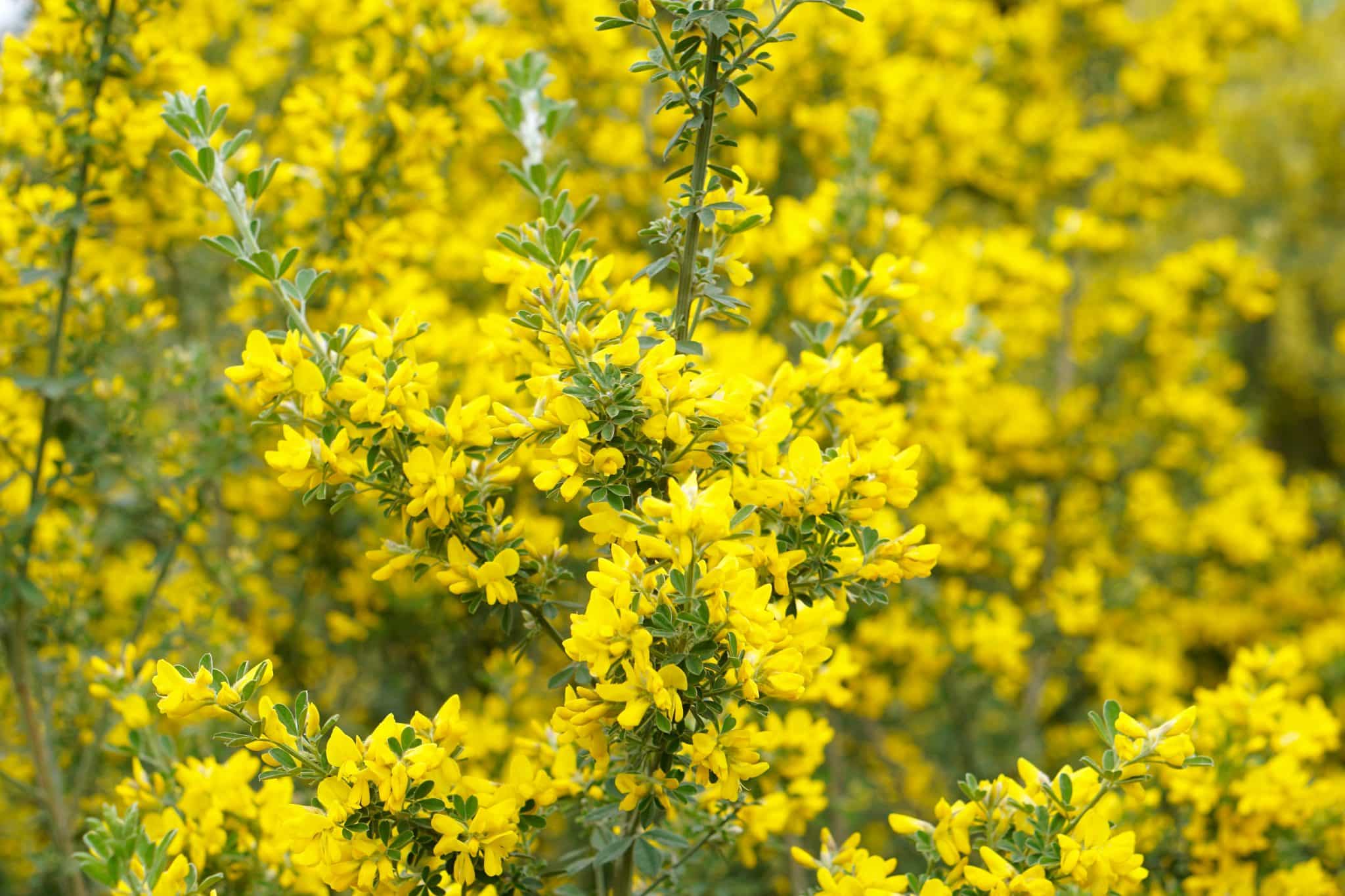 Kew Gardens are outside of the city by 9 km, but it doesn’t take long to get there. It took me about 50 minutes to get there from East London.

The easiest way would be to take the Westward bound tube going towards the Richmond station, and get off at the Kew Gardens stop.

What to bring to Kew Gardens 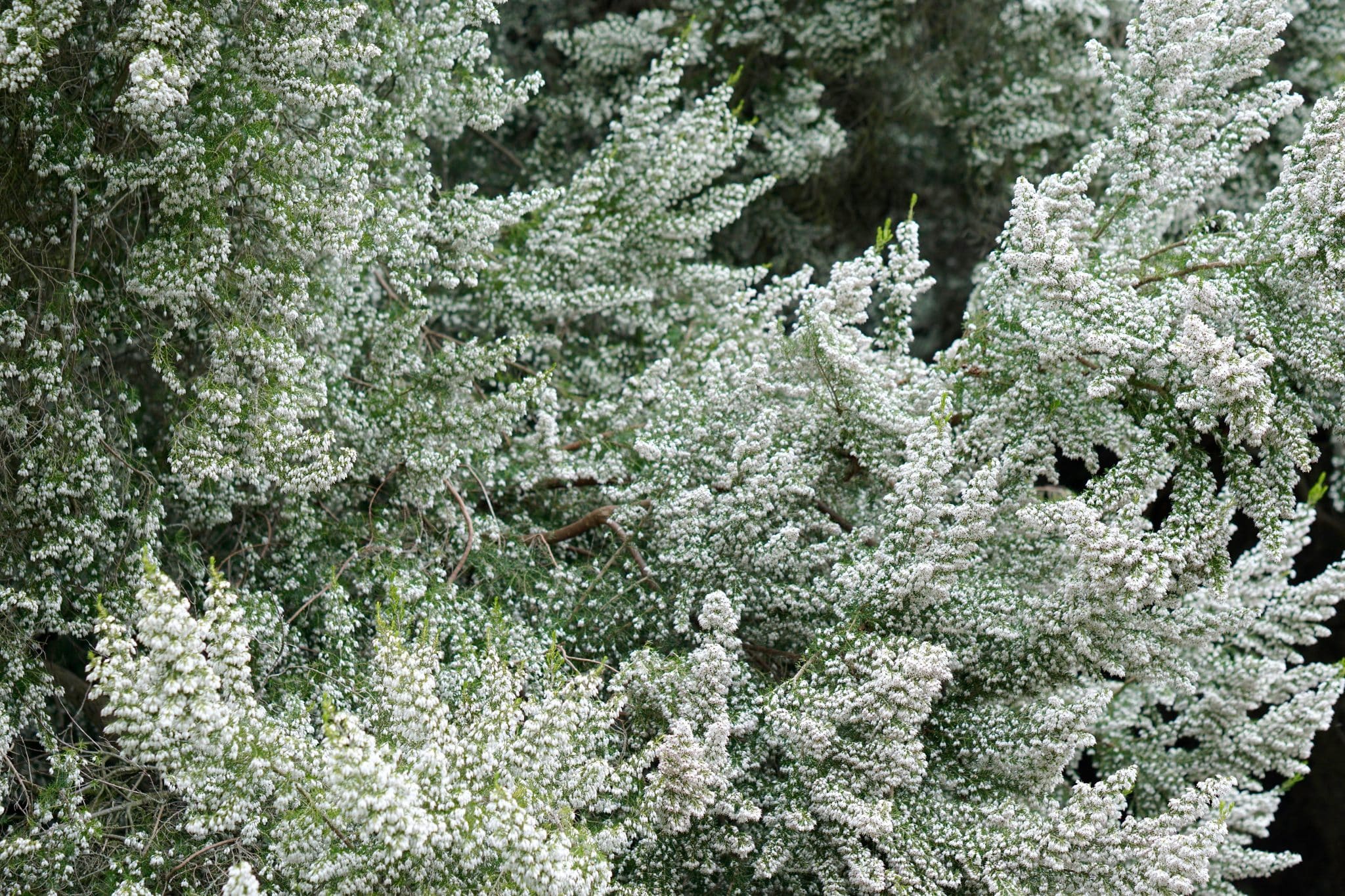 They also have pretty good food in the café. However, it is a bit pricey, so bring food or eat later if you’re budgeting. (I indulged in some gluten free chocolate cake from the café!) 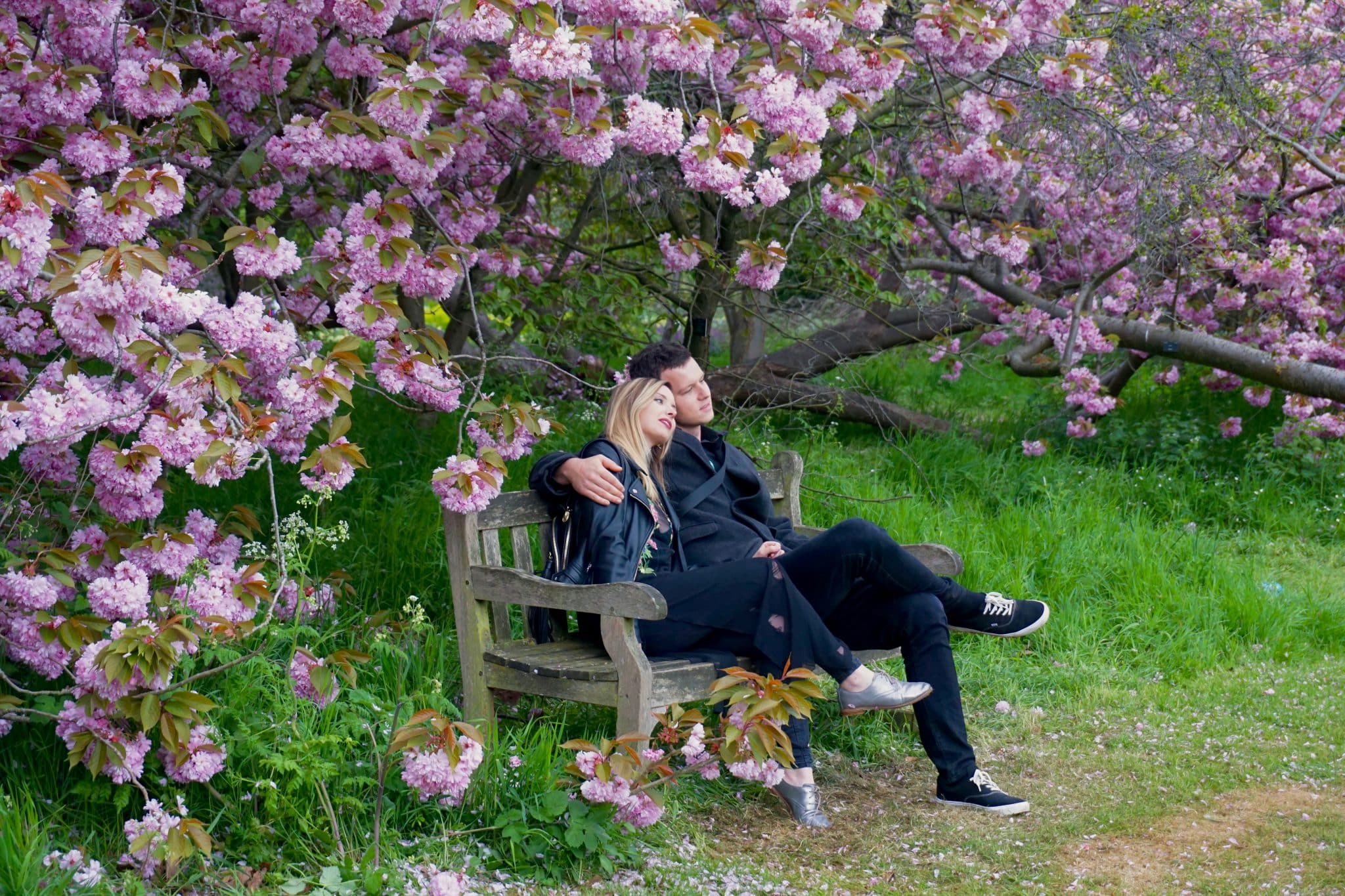 I thought I would spend an entire day at Kew Gardens, but surprisingly we only needed 3-4 hours. The entire area is huge, so it may take longer if you’re committed to seeing every corner of the park. We arrived at around 2 and left at 6, and still had plenty of time to explore more of London in the evening.

Just remember that the Gardens close at 6:30, and some of them close at 5:30, so it’s better to come earlier in the day with enough time to spare.

Have you been to Kew Gardens? Dying to visit? Comment below!