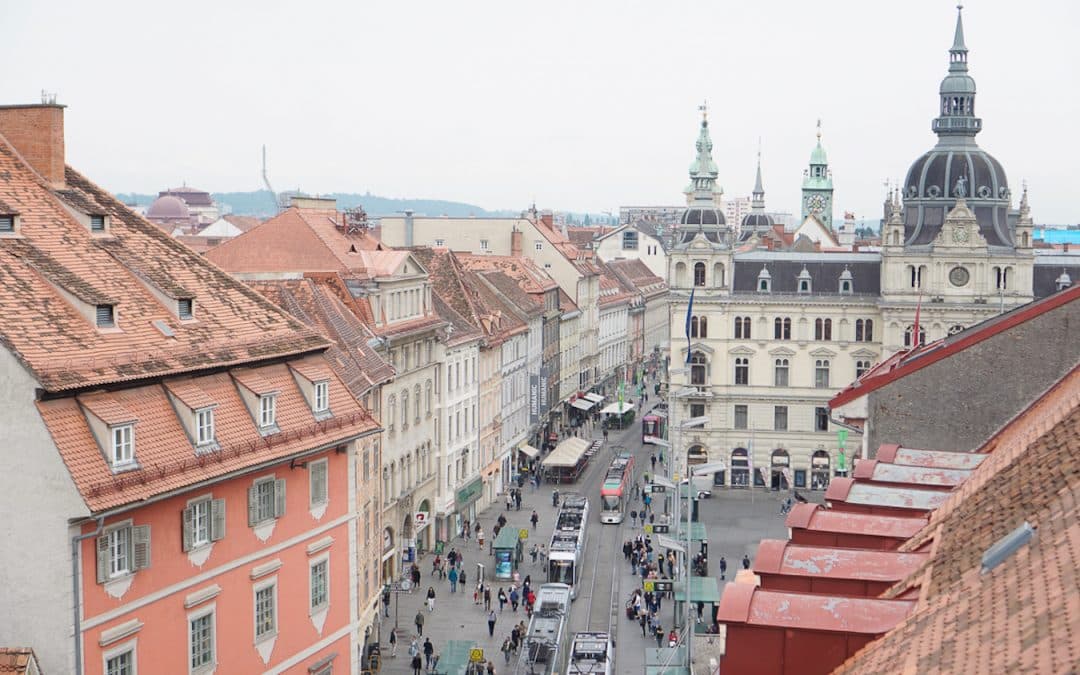 Is there such a thing as being a MID-size city girl? I went from living in Chicago, to now living the seaside village life in Croatia. Whenever I want to get away, I crave a city break that’s somewhere in between. I had already made up my mind about my favorite mid-size city break destinations — that is, until I visited Graz.

If you haven’t heard of Graz, Austria before, you’re not alone. The town is the second largest city in Austria known for its cuisine, design, and young population. As the official culinary capital of Austria, the mid-size city is packed with flavors and farm-fresh ingredients.

10 Unique Travel Experiences to Have in Graz, Austria

Graz is full of a combination of Old-World and modern architecture, which is why it is a UNESCO city of design. And with a youthful spirit in the city, there are tons of unique travel experiences around town that make for the perfect mid-size city break.

Pin it for your next city break:

*Disclaimer: This post was sponsored by Graz Tourism and Austrian National Tourism. Although they were kind enough to help me see the city, all thoughts and experiences are entirely my own.

1. Climb to the park on top of the city

Whenever I research a destination, I’m always looking for the best green spaces and the best views. Atop the Schlossberg in Graz, you’ll find a lush green space filled with rose gardens, hidden walkways, the clocktower, and even an outdoor concert area. The best part? The park sits on TOP of the city. From here you get an epic view of the entire Graz and surrounding Styrian area.
You can get up here either by taking the tram or by hiking the Schlossberg stair the top.

If you’re not keen on walking back down from the top of Schlossberg, why not take the slide? Honestly I’ve wanted to have a slide in my house ever since I saw it on Out of the Box as a 90s kid. I’m still working on this.

The underground slide in Graz is such a fun addition to the city, and it’s definitely not just for children. You could have a drink at sunset at Restaurant Schlossberg and then slide down to the bottom.

Most of Graz may be filled with Old-World charm, but you will find a pleasing blend of modern buildings that add to the UNESCO city of design. One of these landmarks is Kunsthaus Graz, known to locals as “the friendly Alien”. The modern art building looks like a spaceship from Mars on the inside and out.

The coolest part? The building generates its own solar energy!

4. Indulge in “Soul Brunch” at the Grand Hotel Weisler

As the culinary capital of Austria, Graz is filled with unique foodie experiences. There are plenty of places to enjoy traditional Stryian dishes, but for a unique travel experience, check out “soul brunch” on the weekends at the famous Grand Hotel Weisler.

This place is known for hosting several celebrities, including Graz’s very own Arnold Schwartz. The hotel is decorated like an Austrian palace, but with funky elements included like graffiti and bikes in the lobby. I loved the spacious, industrial design of my room and the ideal location right in the heart of Graz!

But what really got me out of bed every morning is the incredible brunch at Hotel Weisler. On the weekends they even bring in a DJ to play soul funk music, which brings in a crowd of trendy foodies from all over town. I’m into it.

Haven’t you heard? Bar hopping is out. Farmers market hopping is in. (Yes, I’m 25 going on 85.) Even though I still don’t consider myself a huge morning person, heading to the farmers market is one thing that will get me out and about in the early hours.

In Graz there is not just one but 14 farmers markets. FOURTEEN. I don’t think Chicago even has that many! There are two daily farmers markets, one located in the Lend District, and the others are only open during the weekends.

Since Graz is filled with such rich farmland, it really is a must to experience the variety of markets in Graz. You’ll find everything from fresh lavender, local produce, homemade jams and soups, and even local cheeses.

6. Chill out at the Balkan Rock Cafe

Graz is actually home a large Balkan population, mainly from Croatian and Bosnian. Next to Germans, Croatians are the largest outside nationality living in Graz.

The Lend District is where you’ll find a fusion of international influences, especially Balkan. I couldn’t help but chuckle when seeing the Yugo Festival happening over the summer. Definitely the best gem I stumbled upon was the Balkan Rock Cafe, where I can only imagine plays rock legends like Bijelo Dugme and Azra.

My own little slice of the Balkans in Austria!

Before he became a bodybuilder, actor, and mayor, Arnold Schwarzenegger was a boy from the Styrian countryside. Yes, “the Terminator” actor calls Graz home, and it’s only natural that there is an entire museum dedicated to him!

The museum covers some of the most important parts of his early life and later career, following how he came about the “American Dream”. The museum has quirky replicas of his childhood bedroom to his bodybuilding gym where it all began.

8. Check out at the panoramic view atop the Department Store Rooftop

Graz is home to dozens of ethical, locals shops that you should definitely check out (I wrote more about this here). Otherwise, a visit to the K&O department store is worthy of an afternoon visit in and of itself. Not only does the store carry a variety of top luxury brands, the building’s lavish design makes for quite the shopping experience.

Once you’re shopped out, head to the rooftop bar for a cold drink and panoramic view overlooking the city center. I was impressed that the food was just as good as the view, and I would definitely recommend coming for brunch or a late lunch during your time in Graz.

The attraction that really made me fall in love with Graz? The Murinsel. This futuristic structure is a manmade island on the Mur River. Not only does it connect one side of Graz to the other, the island itself has a cafe with a small outdoor theatre for live music and events.

This is where we had our welcome event in Graz, and it is so magical to see the island all lit up at night.

10. Stay inside an art gallery

I had the opportunity to stay on the other side of town during the latter half of my visit. We stayed in the Lend Hotel, which let me tell you, was like spending a night inside an art museum.

The hotel was founded by Dietrich Mateschitz, a formula 1 race car driver and owner of half of Red Bull. He grew up in Austria but comes from a family of Croatian roots. AND he also happens to be an art collector.

Naturally the hotel is home to his collection of paintings, sculptures, and furniture from around the world. There is literally not a single blank wall that doesn’t have a piece of vibrant artwork on it. Each hotel room has at least one piece of artwork!

The Lend Hotel gave me the opportunity to experience a lesser-known side to the city while still being a 15-minute walk to the city center. Not to mention I think this was the most comfortable bed I’ve ever slept in!

There’s definitely so much more to Graz that I didn’t get a chance to experience. I anxiously await for when I can return and experience all the culture and unique travel experiences packed inside this perfect little mid-size city.