The Green Guide to Geneva (On a Budget) 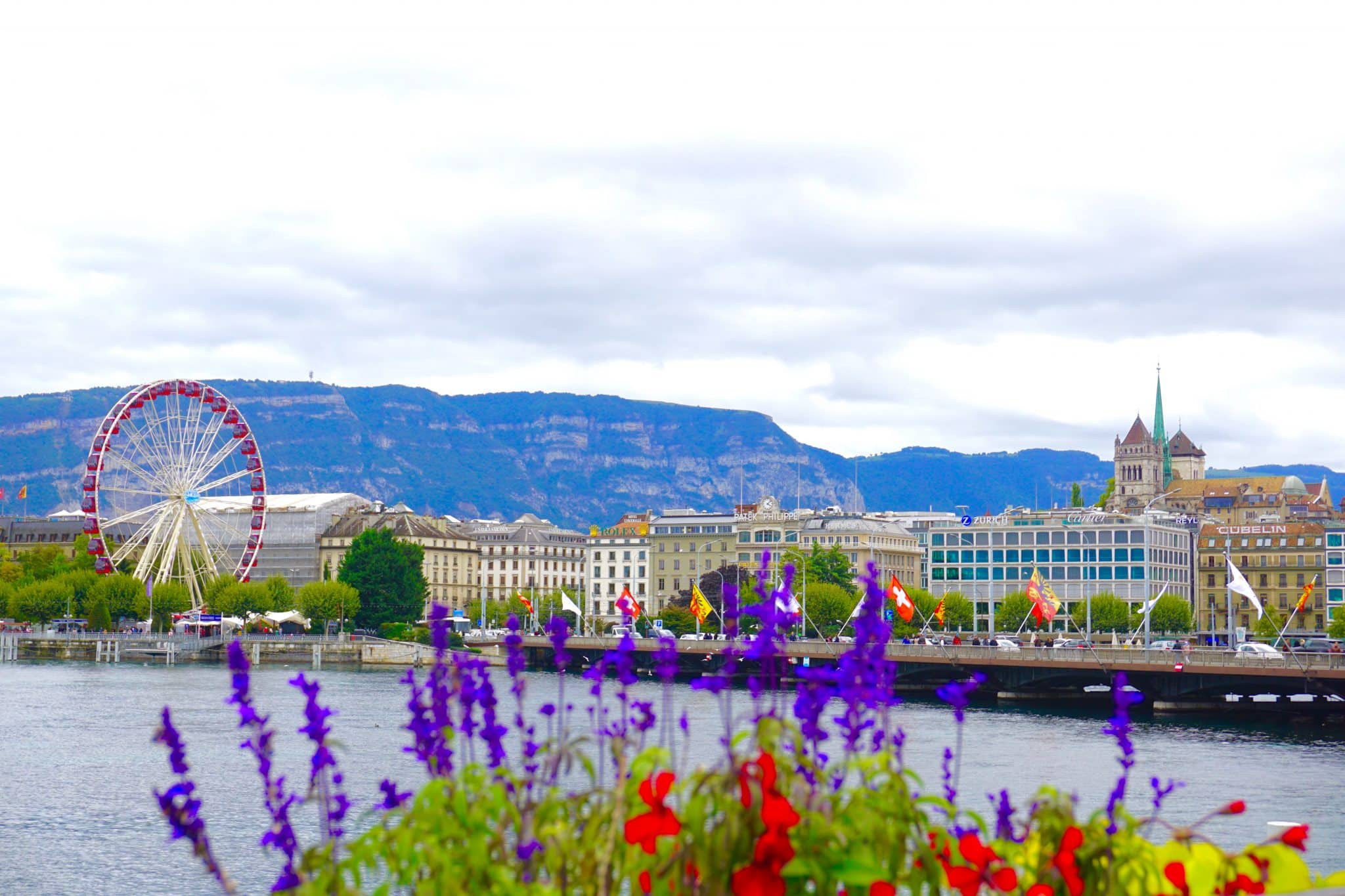 Geneva is one of the most eco-friendly cities in the world, but it also is one of the most expensive. This lakeside city is decades ahead of the rest of the world in sustainability and functionality, while being the heart of international organizations in Europe. Not to mention, it is also strategically located in the epicenter of Switzerland’s most pristine natural wonders.

Lucky for you, my friends, some of the best ways to experience Geneva are both budget and eco friendly.

Pin it for future travels: 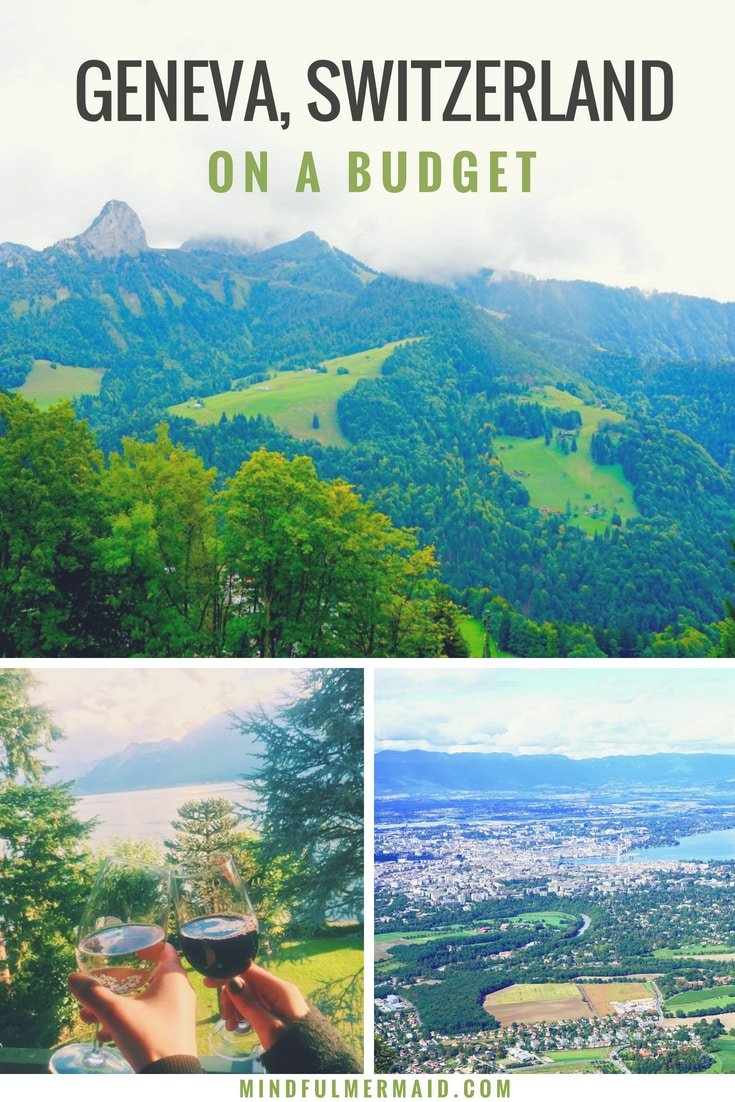 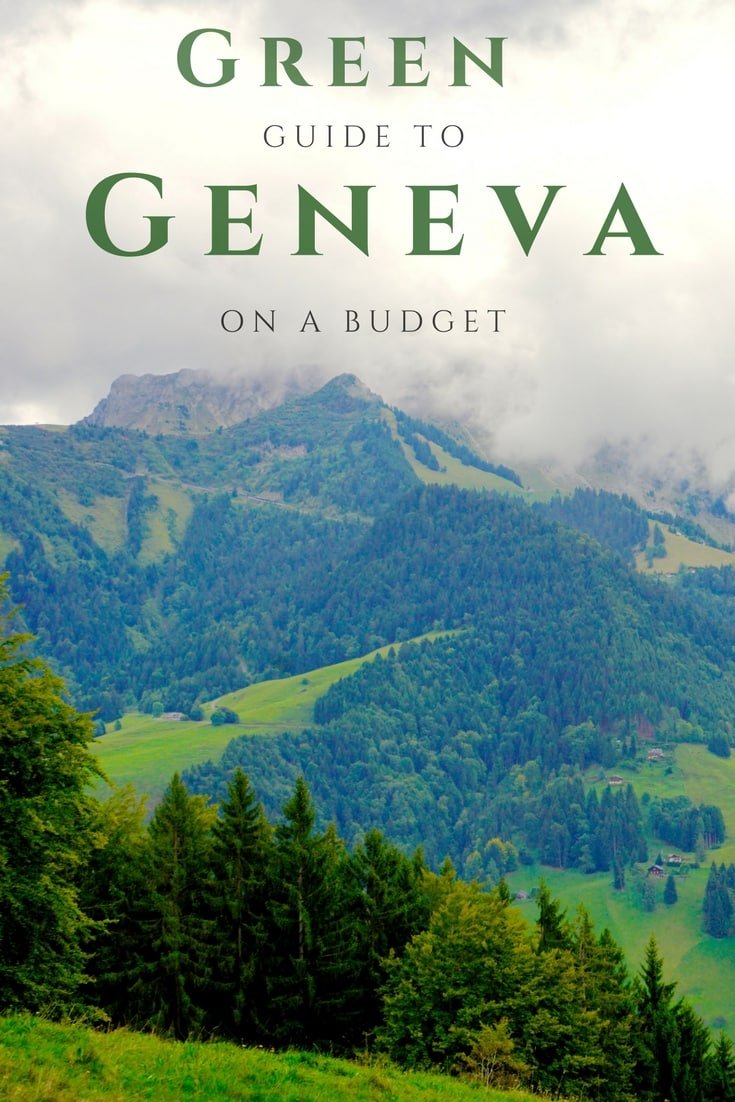 Background and history of Geneva, Switzerland:

Bordering France and the French Alps, Geneva is located in the French speaking part of Switzerland called Romandy. It is the second largest city in Switzerland, next to Zurich.

Geneva remained an independent city-state from the Middle Ages up until the 1800’s, and is also known as one of the centers of the Protestant Reformation, specifically Calvinism.

Also known as the “Peace Capital”, Geneva has a longstanding commitment to peace and diplomacy over the last decade. Most notably, the Geneva Convention was held here in the aftermath of WWII to establish wartime human rights for civilians and combat (yes, I’m a huge political science nerd). Some of the Balkan negotiations also took place here after the breakup of Yugoslavia in the 1990s. 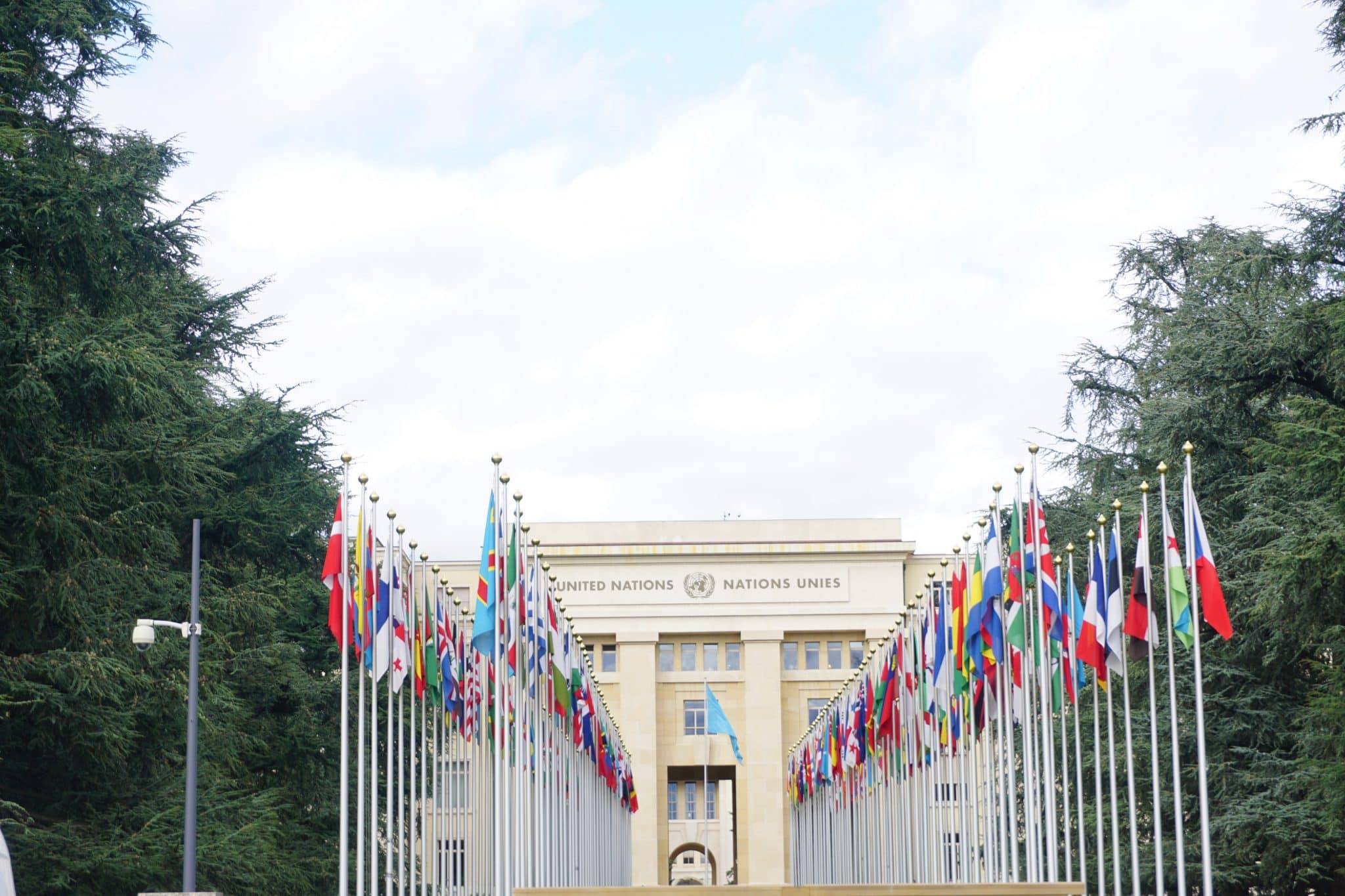 Geneva is home to about 250 international organizations today, including the United Nations and The Red Cross. Banking and finance are thriving industries here as well 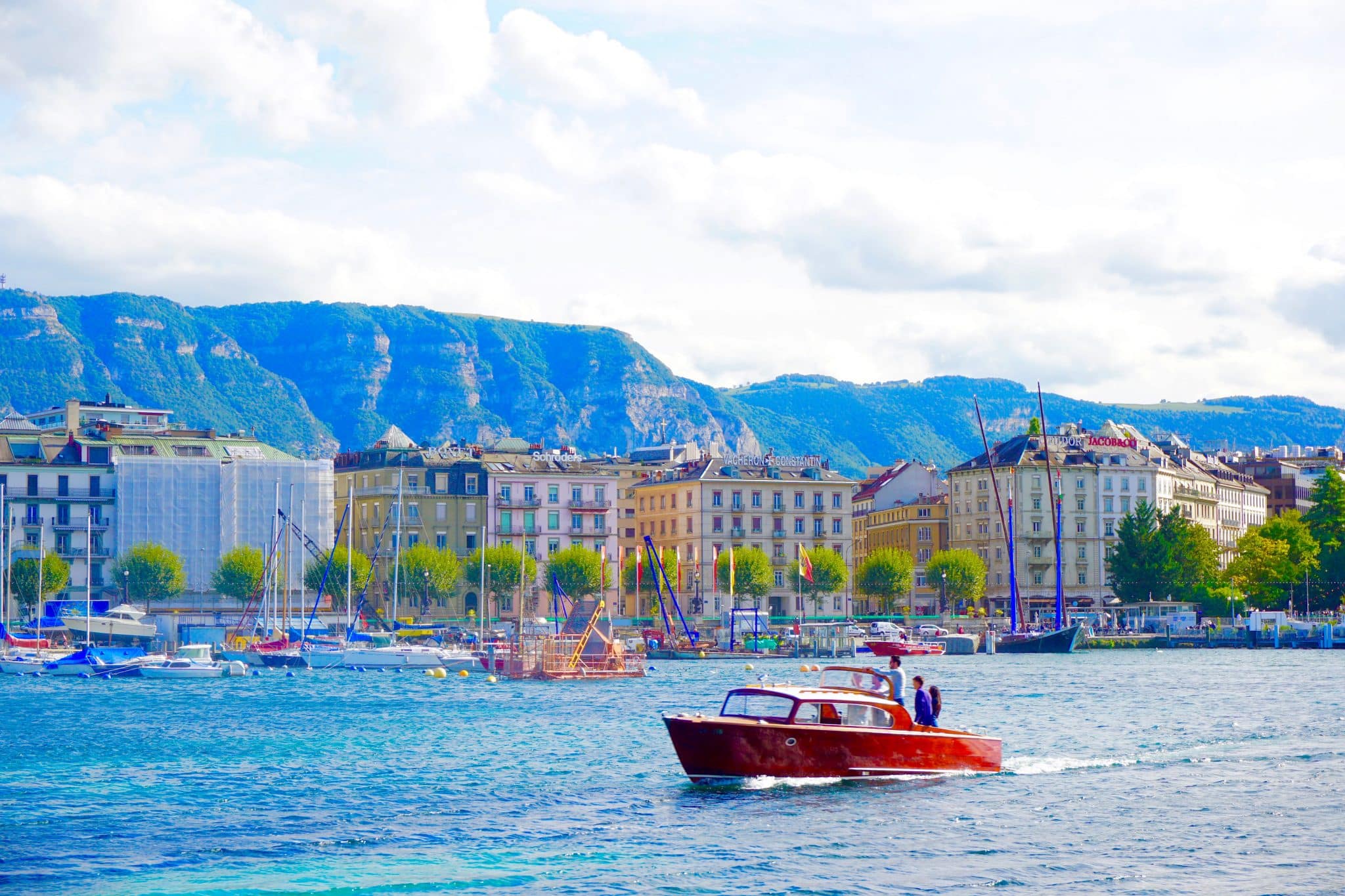 The city is a diverse mix of Swiss locals and a flourishing expat community. From Australia, New Zealand, India, Central American, and the United States, almost half of Geneva’s population are not Swiss citizens.

Like the rest of Switzerland, the city, it is extremely functional and reward locals with a high standard of living. Switzerland implements the purest form of direct democracy, so it was no surprise to see that citizens of Geneva are extremely involved in local and national politics.

This is part of the reason why there is such a resistance to join the European Union in Switzerland, as much of the Swiss value being directly involved in their country’s own political decision making. 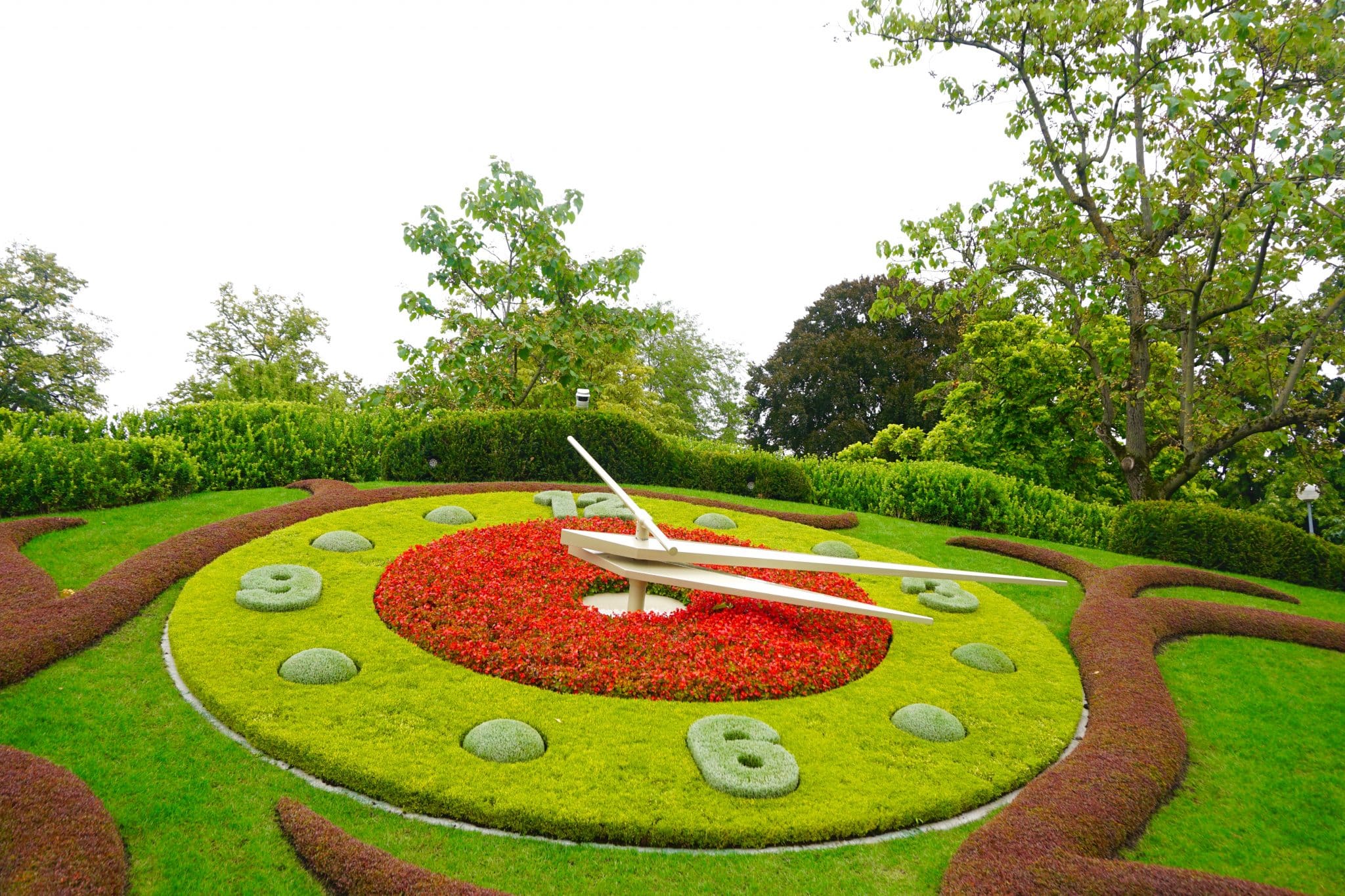 A part of this care for the community is also care for the environment. Everyone recycles, and neighborhoods will report you if you don’t, so I’ve heard.

Not only is it popular to take more eco-friendly forms of transportation, such as biking and public transport, locals are very much informed about the dangers of climate change while working to reduce carbon emissions (like the Geneva airport). Recently, Switzerland as a whole voted to move towards a circular economy strategy, which would reduce the country’s ecological footprint by 2/3rds.

How to see Geneva on a budget 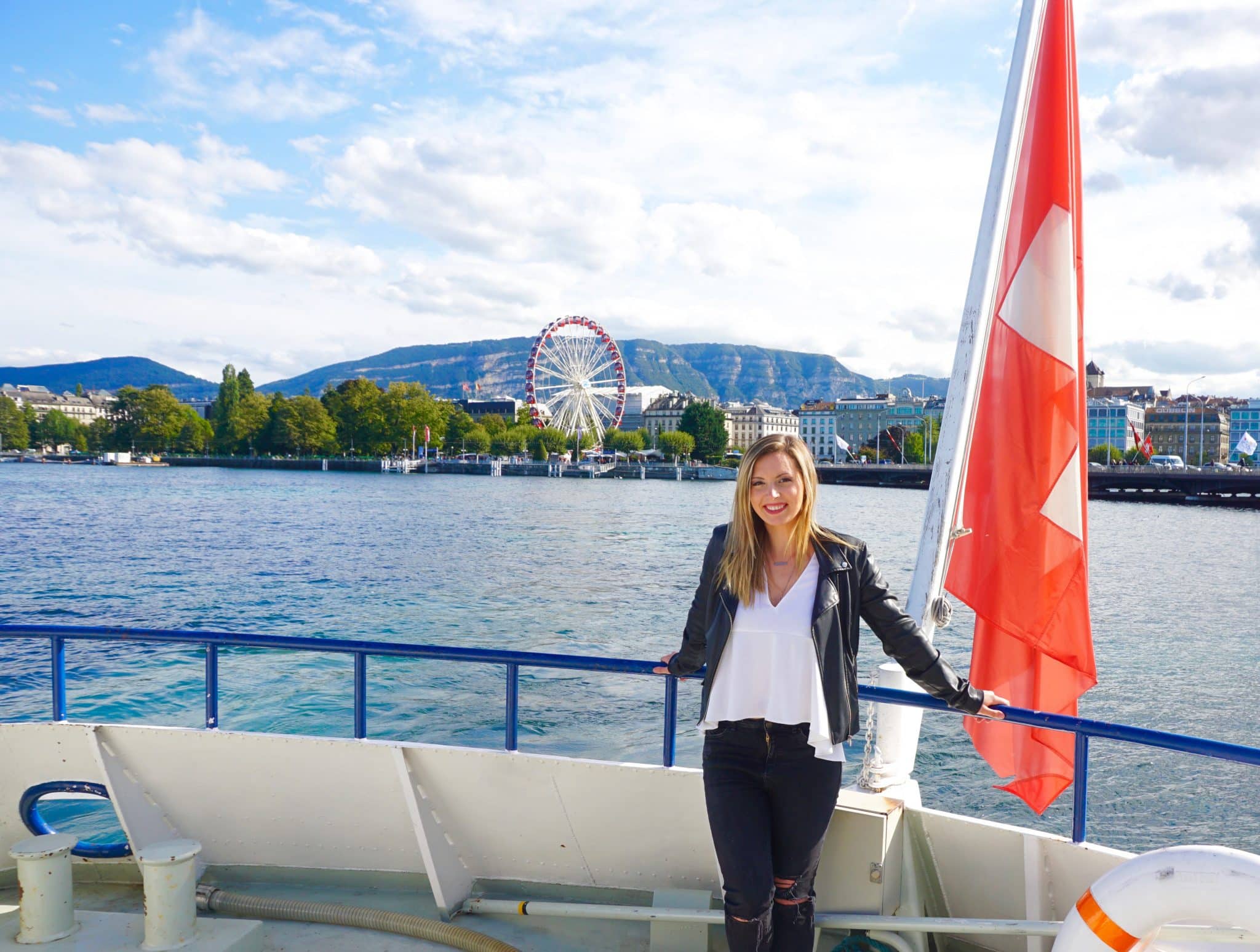 READ MORE:   Annecy, France: A Photo Diary of the Venice of the Alps

Please note that Geneva uses the Swiss Franc, and not the Euro. The Franc is about 1 USD. Here’s how I spent less that 500 Francs in one week, excluding accommodation. 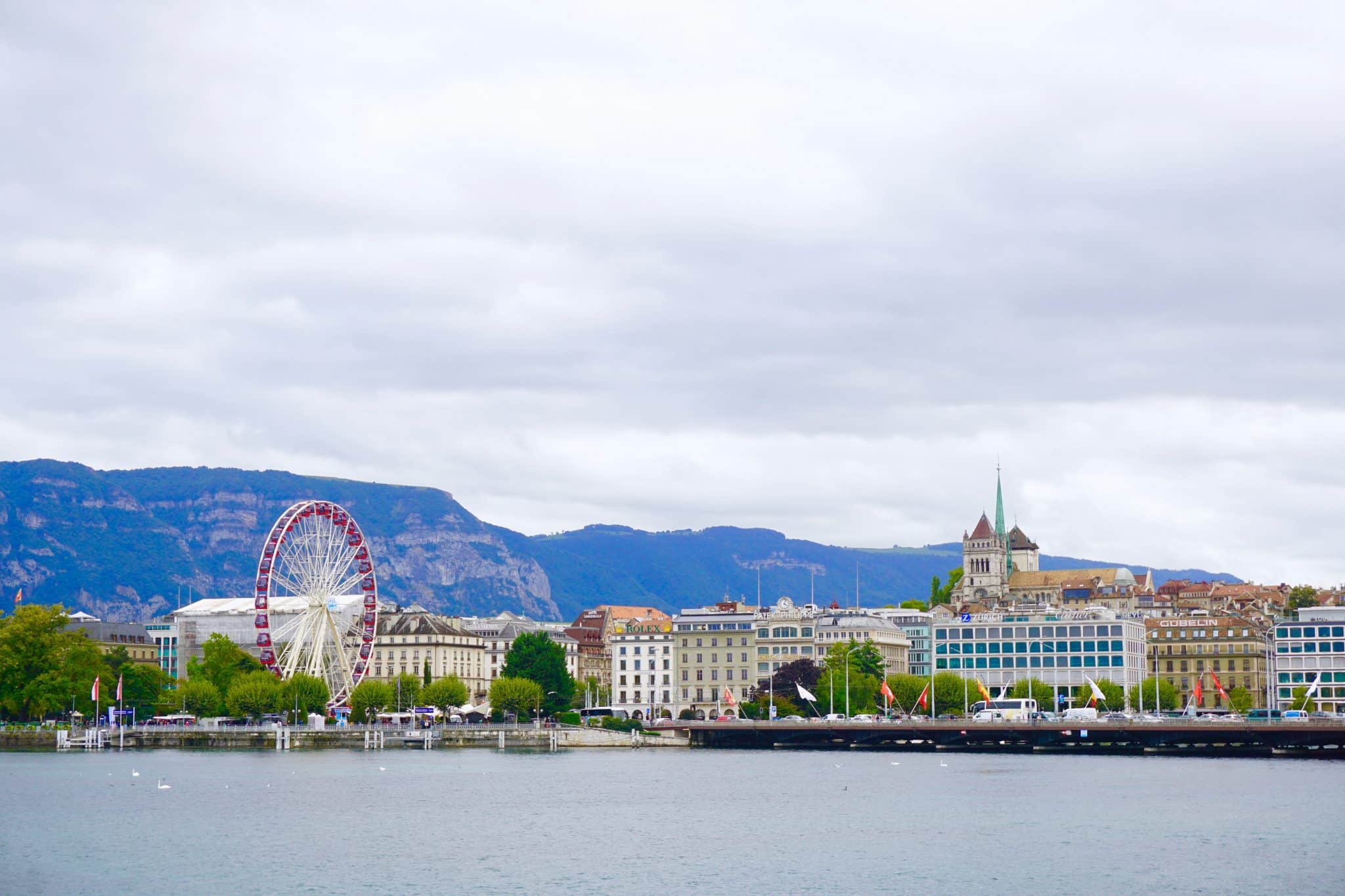 I was lucky enough to stay with my friend who lives in Geneva, so this was a huge budget saver. Though I’ve never couch surfer myself, I’ve heard great things about couch surfing in Geneva from other travelers and travel bloggers.

Geneva is very safe with a fairly low crime rate. So much so that my friend is losing her wallet constantly here and it’s been returned safely every time (though I don’t recommend trying this). Therefore, I think this would be one of the safest cities to try couch-surfing.

Food and cuisine in Geneva

Now here’s the secret to saving the most money in Geneva: cook at home. Dining out in Geneva is so expensive that you’ll save most of your money by cooking your food at home. Simply getting lunch with an entrée and a drink may cost around 50 Francs.

Even groceries, especially meat and dairy can get insanely expensive if you don’t look at the prices beforehand. I recommend the grocery stores Migros and Coop. 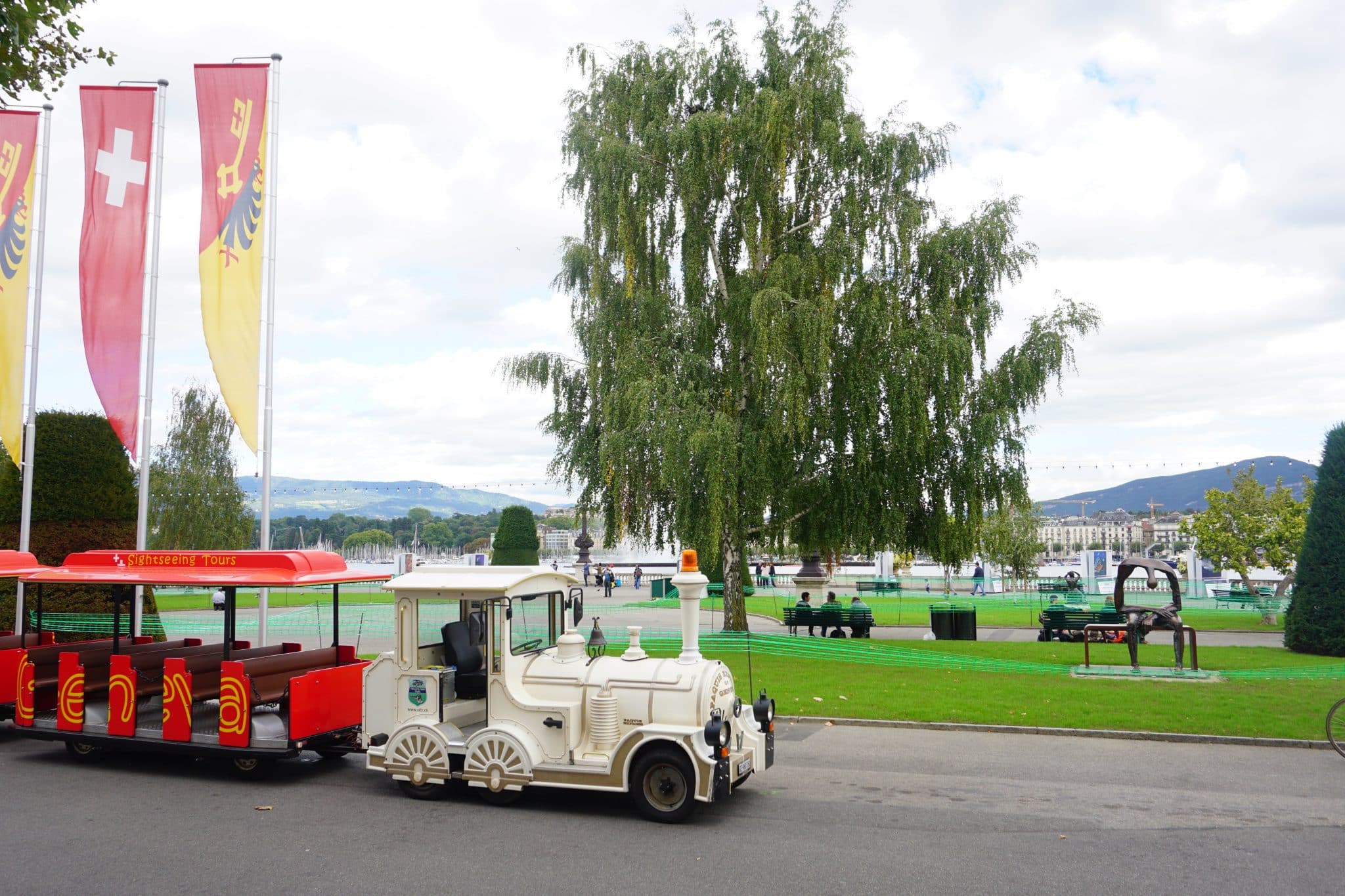 Look for a small box and get a ticket for the train going into Geneva. The train only takes about 10 minutes, and you can still use that pass for other bus or tram transfers.

A one-way ticket for bus or tram is around 2.50 francs, which can quite easily add up. This is way I completely recommend getting the Geneva Pass.

Why I recommend getting the “Geneva Pass” while visiting 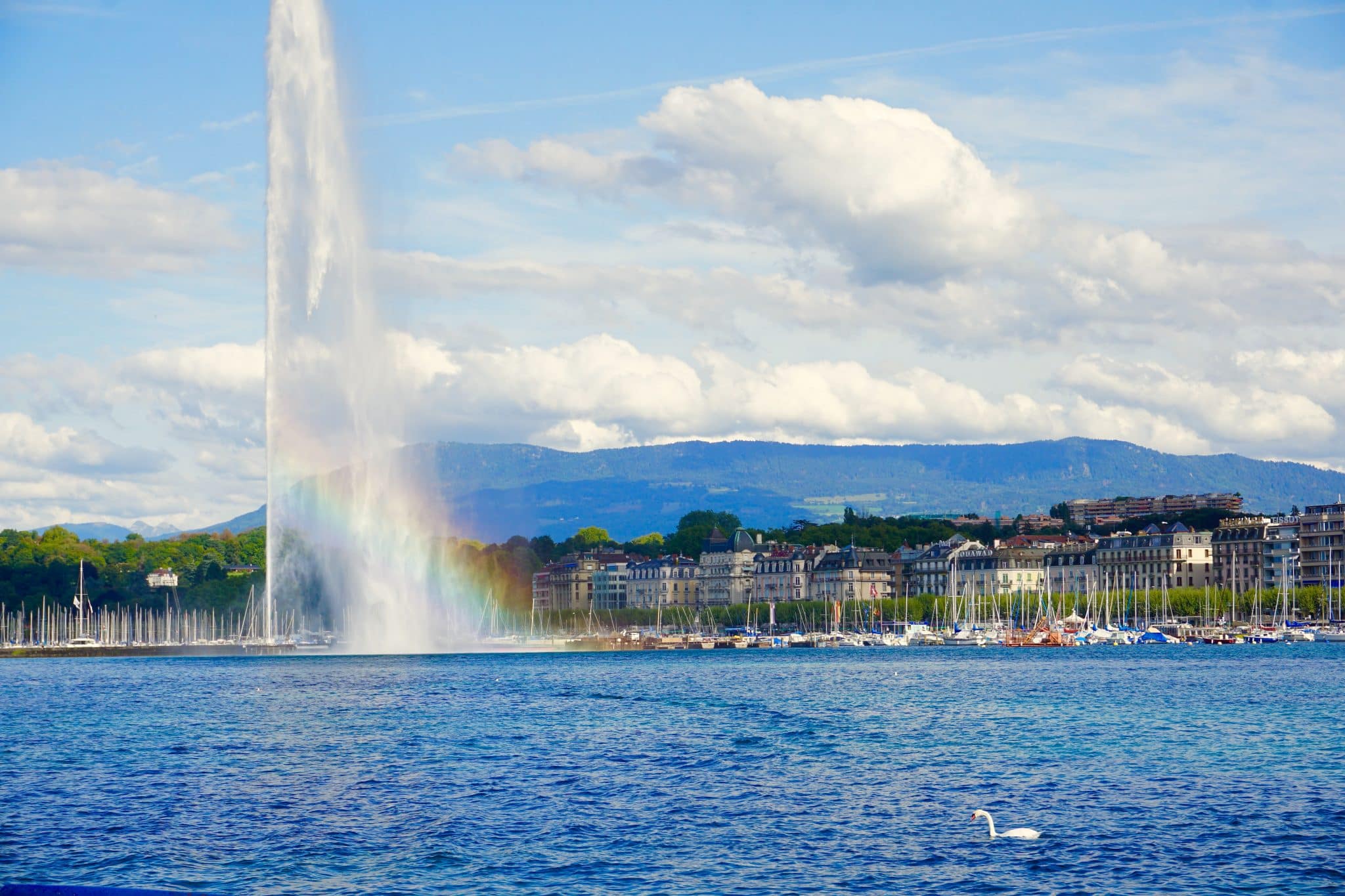 You can get this pass for up to 3 days, which gives you free transportation and access to dozens of Geneva attractions.

I ended up getting the 3-day Geneva pass for 42 Francs, which saved me at least 50 Francs considering everything I ended up doing.

Here is a full list of all the activities included with the Geneva pass, including boat tours of Lake Geneva, bus tours, access to several museums, and discounts for several outdoor attractions.

You can pick up the Geneva pass at the tourism office, but you will get a 10 percent discount if you book online here. And no, this is not sponsored at all, I just think it’s a great deal!

Tours and attractions in Geneva 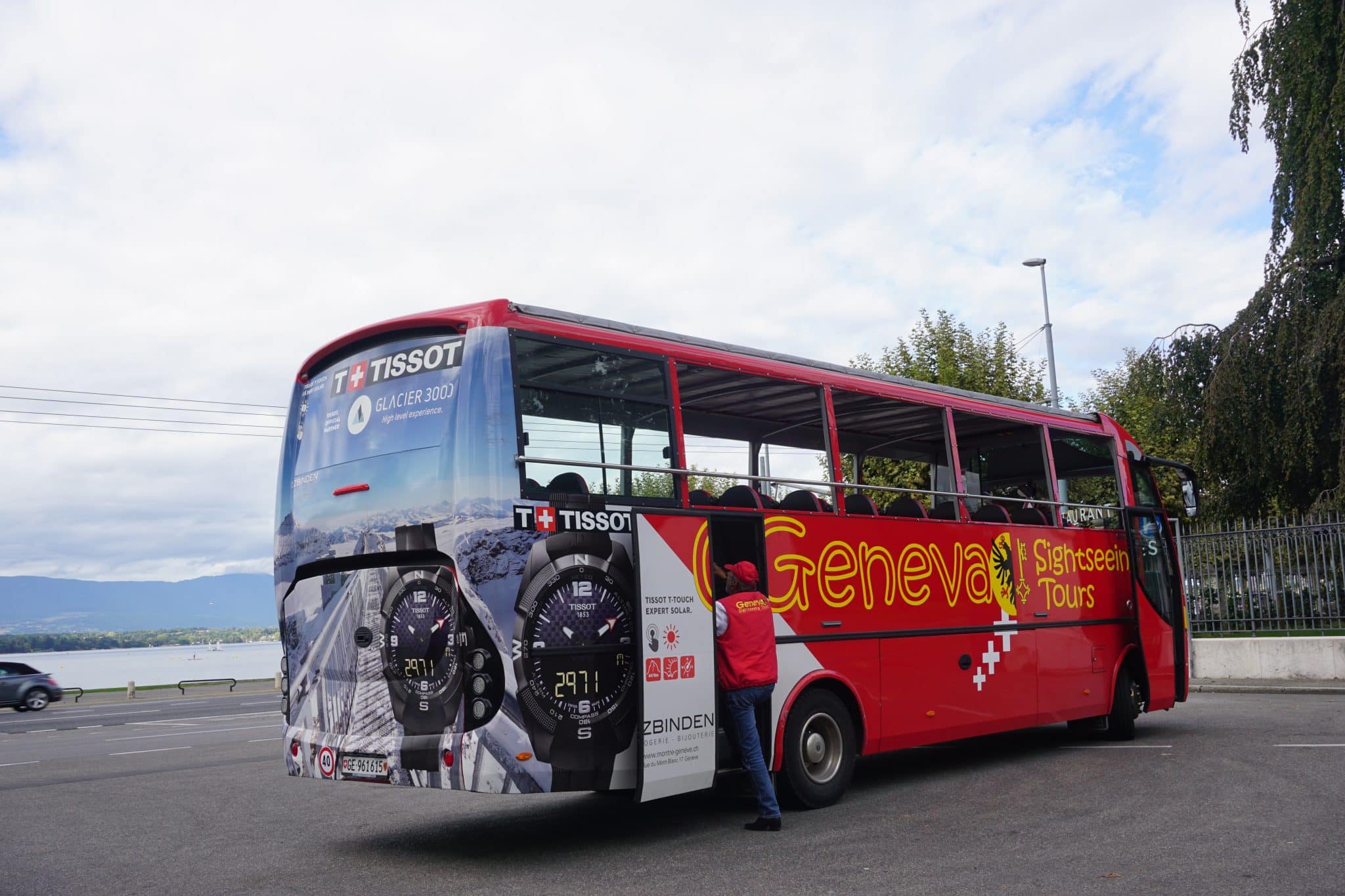 I rarely go on organized tours when I travel, and this was my first open bus tour. But since it was included in the Geneva pass I figured I’d give it a try.

READ MORE:   Things to Do in Zermatt, Switzerland: a Winter and Summer Travel Guide

It ended up being a very convenient way to see the international organizations and the Geneva area in general. It also gave a great overall summary of Geneva’s history.

If you’re particularly interested in the U.N, I recommend taking a look on the inside with a private tour. I was lucky enough to come as a guest of a friend, and believe me when I say it is worth it to see the magic from the inside.

You will have to take a scheduled tour however, as it is forbidden to just walk inside by yourself. 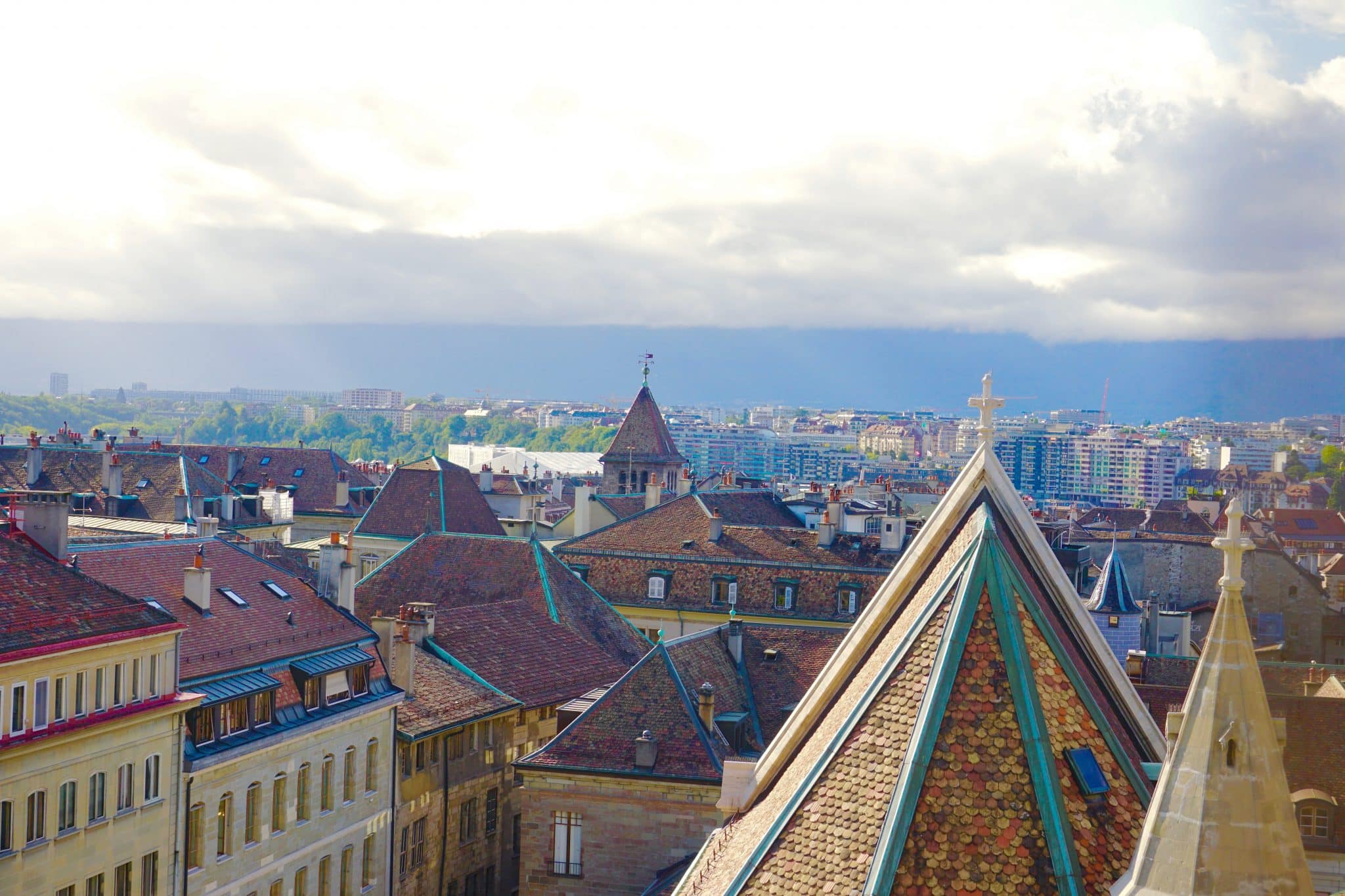 Towering over Geneva’s Old Town, this attraction is a symbol of the protestant influence in Geneva. Take the climb all the way to the top of the Bell Tower for several views from the very top!

Did you know that the Red Cross was founded in Geneva? The Red Cross Museum has all the history of this iconic international organization, though I ran out of time to get here myself. 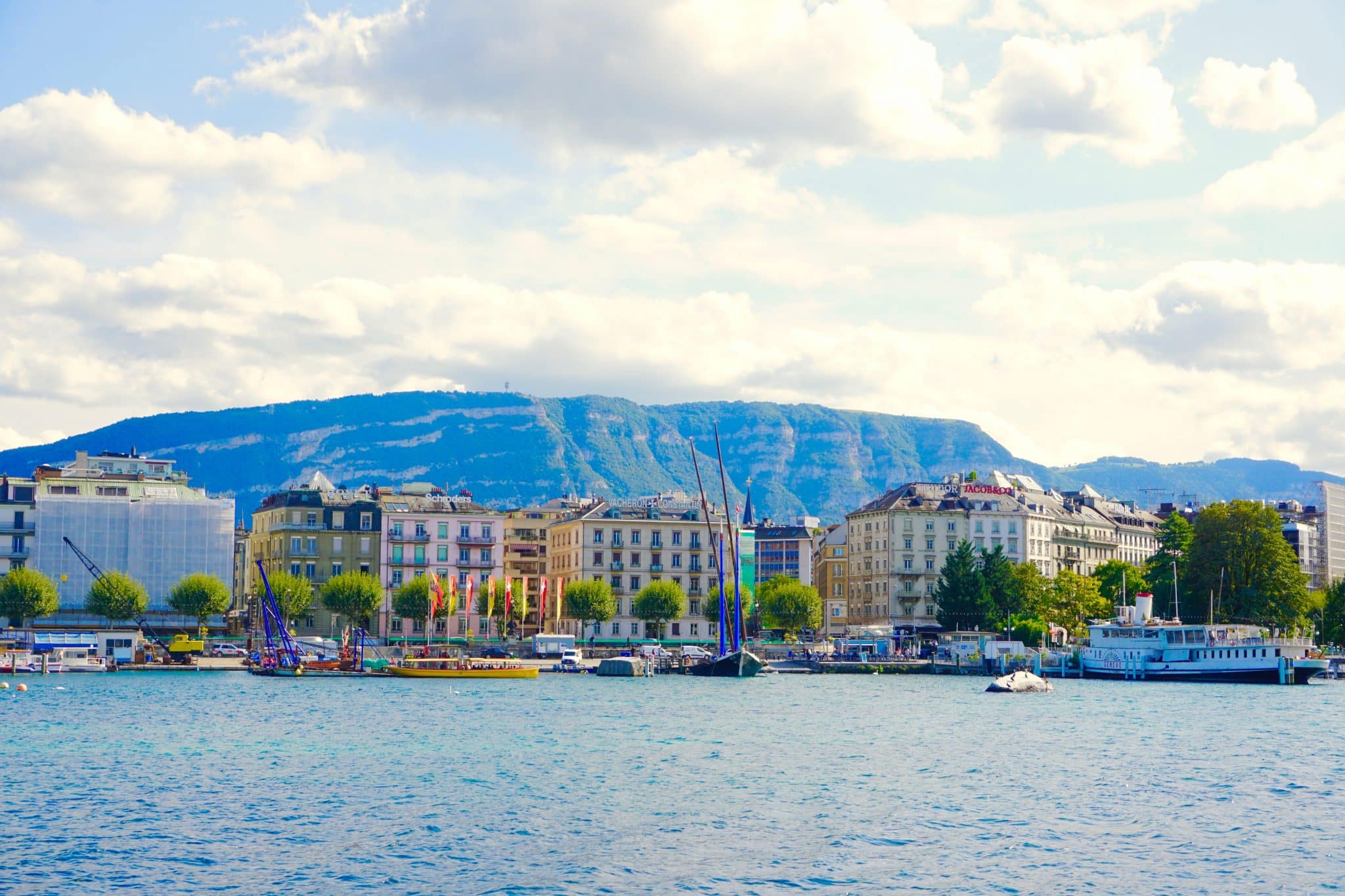 If you’re going to do one thing in Geneva, this is it. There is no better way to experience this town than going for a boat ride around Lake Geneva on a sunny day.

The tour lasts for an hour and has multiple pick up and drop off points, either at Geneve Mt-Blanc or by the Ferris wheel. 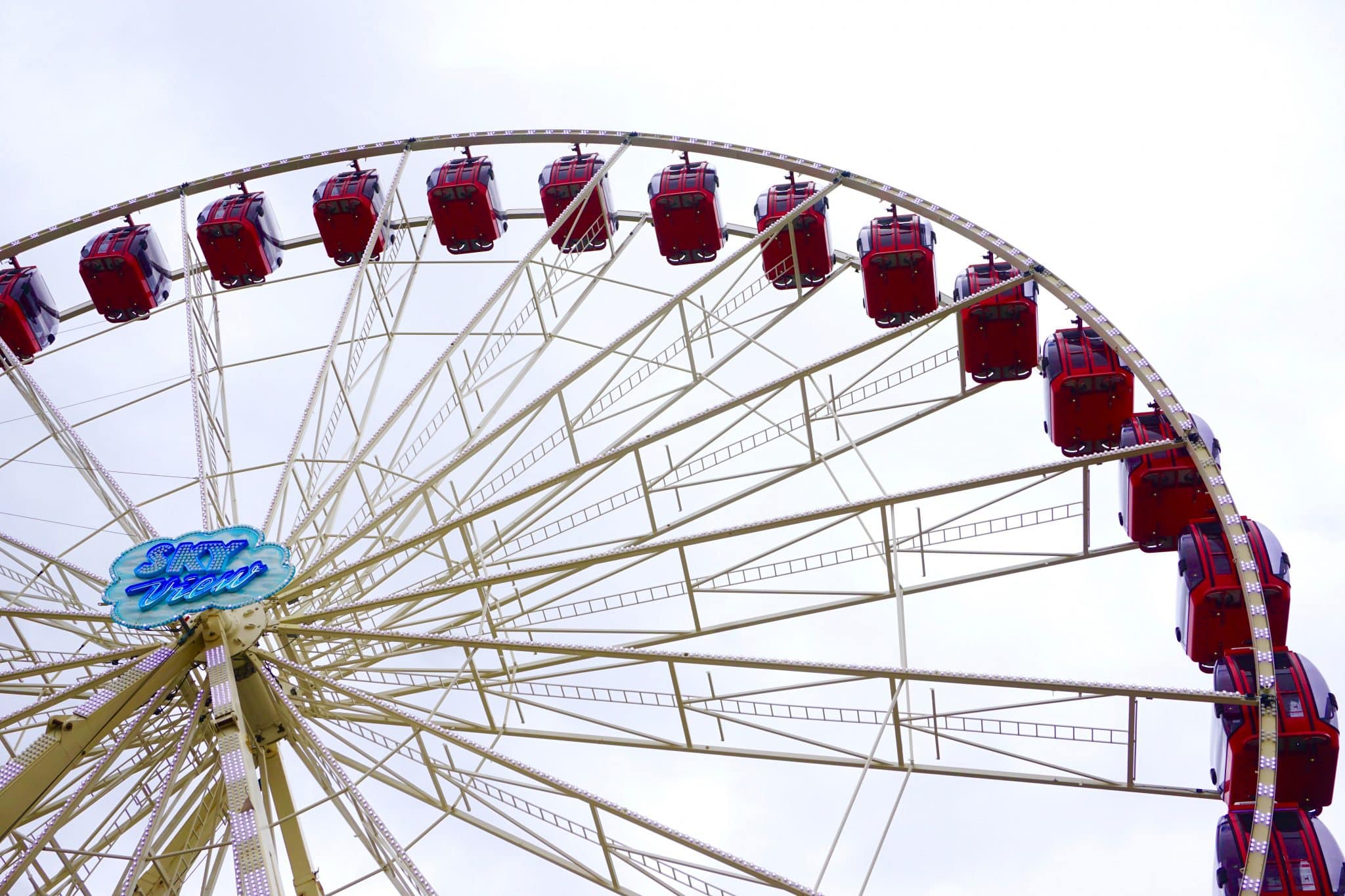 This thing is higher than it looks, but does have a gorgeous view over the center of Geneva. Make sure to go in the daytime to see it best, but even at nighttime it’s still surreal too!

The best eco attractions in Geneva 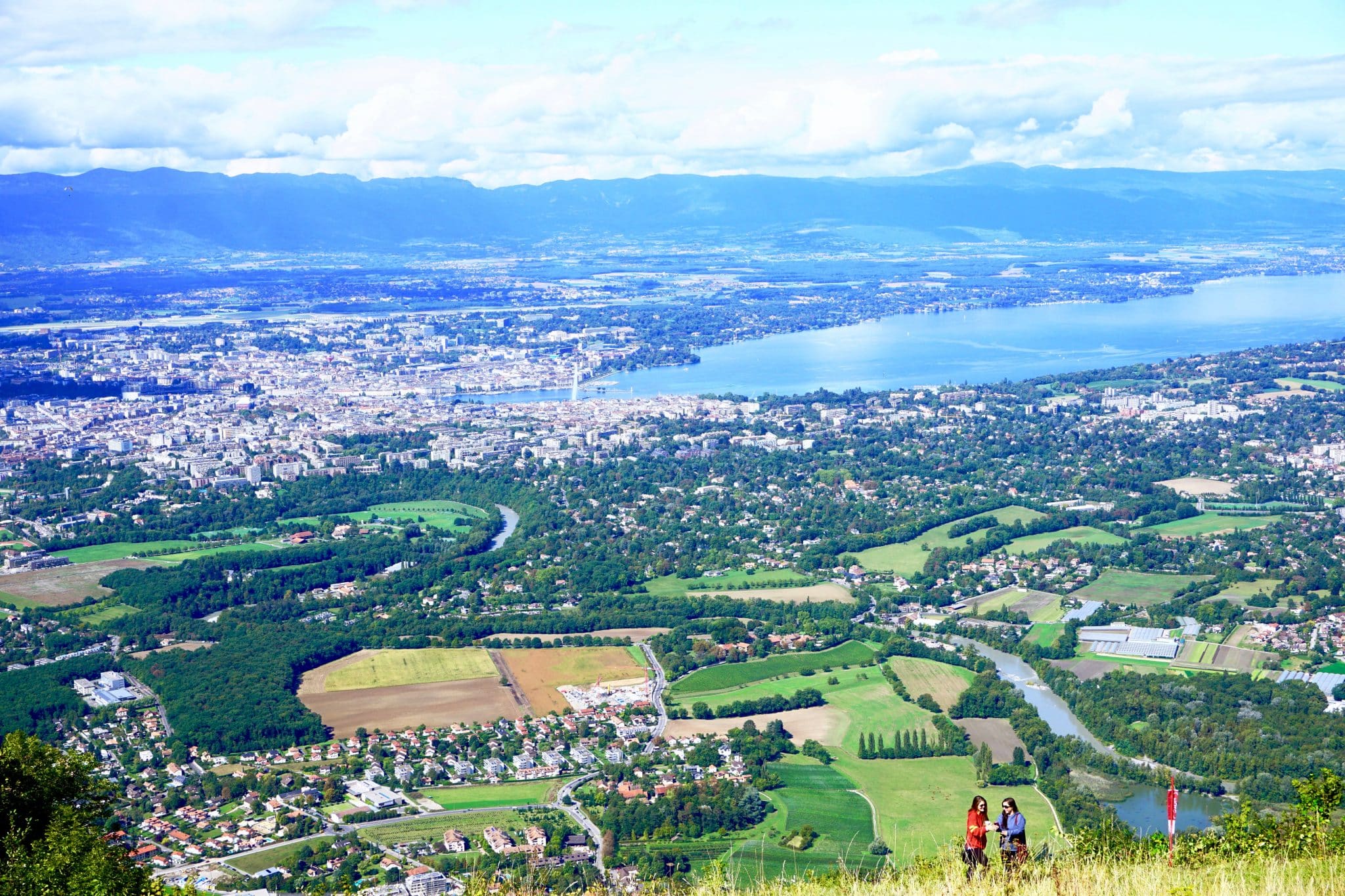 If you want the best view over Geneva and the surrounding area, you’re going to have to go to the very top. Mount-Saleve is actually in France, but only about 40 minutes away from Geneva by bus. Believe me when I say that the view from the top is well worth the trek.

If you’re into hiking, there are a few hikes at the top of Mount-Saleve as well. Follow the signs after you get off the cable car, and keep going until you get all the way to the top! (Don’t stop too early like I did).

Take bus 8 from Geneva’s main train station towards Mount-Saleve, and get off at the last stop. From there you have about a 10-minute walk to the bottom of the cable car! (And don’t worry you don’t need your passport for going to the French side).

There are a number of outdoor attractions on Lake Geneva, such as kayaking and paddle boating. With your Geneva pass, you can get up to one hour free for a few of these.

READ MORE:   Things to Do in Zermatt, Switzerland: a Winter and Summer Travel Guide 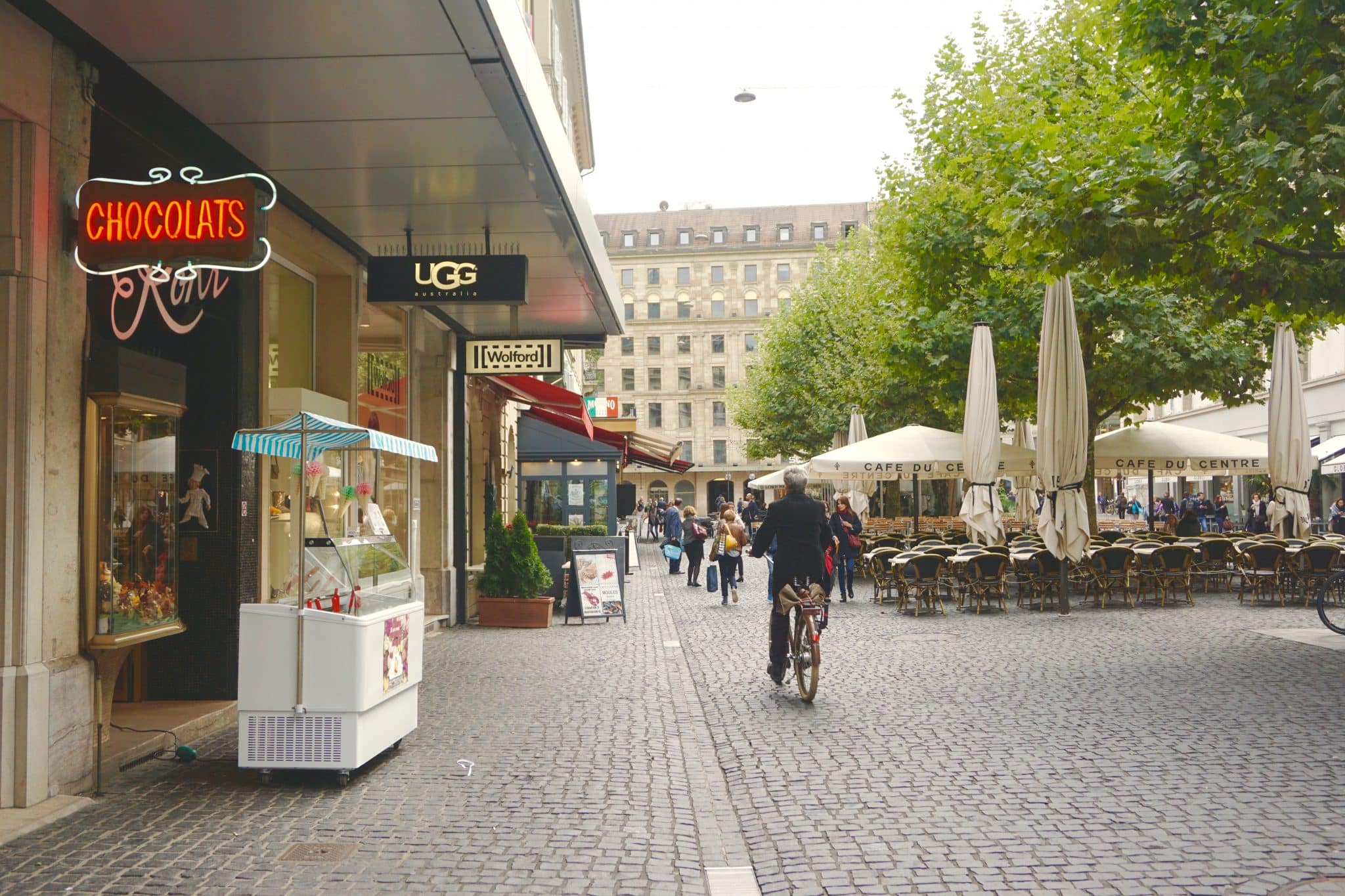 Along the Quai Du Mont-Blanc, you’ll find a small hut that offers bike rentals for FREE, up to 4 hours. You can take the bikes through the city, or venture out along the scenic bike paths along the lake.

Hiking around the Jonction area 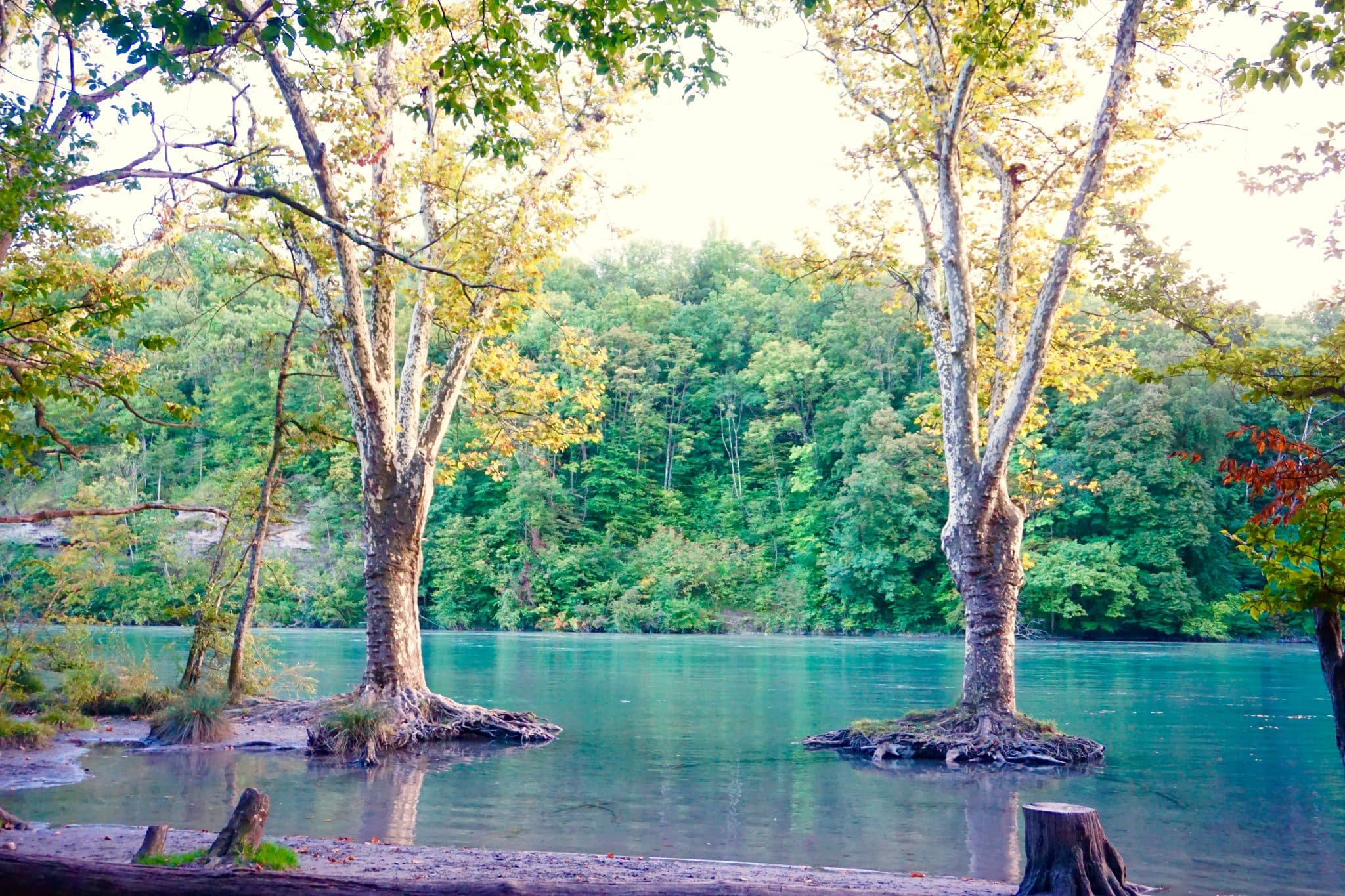 Consider this place a hidden gem only known to locals. Where the Arve and Rhone rivers meet, you’ll find the start of several walking trails along the river that eventually lead into the woods.

Follow the Rhone River down past junction for about a half hour, and the trail will begin to go into the woods, with gorgeous landscape shots like this.

Taking a day trip to hike in Montreux 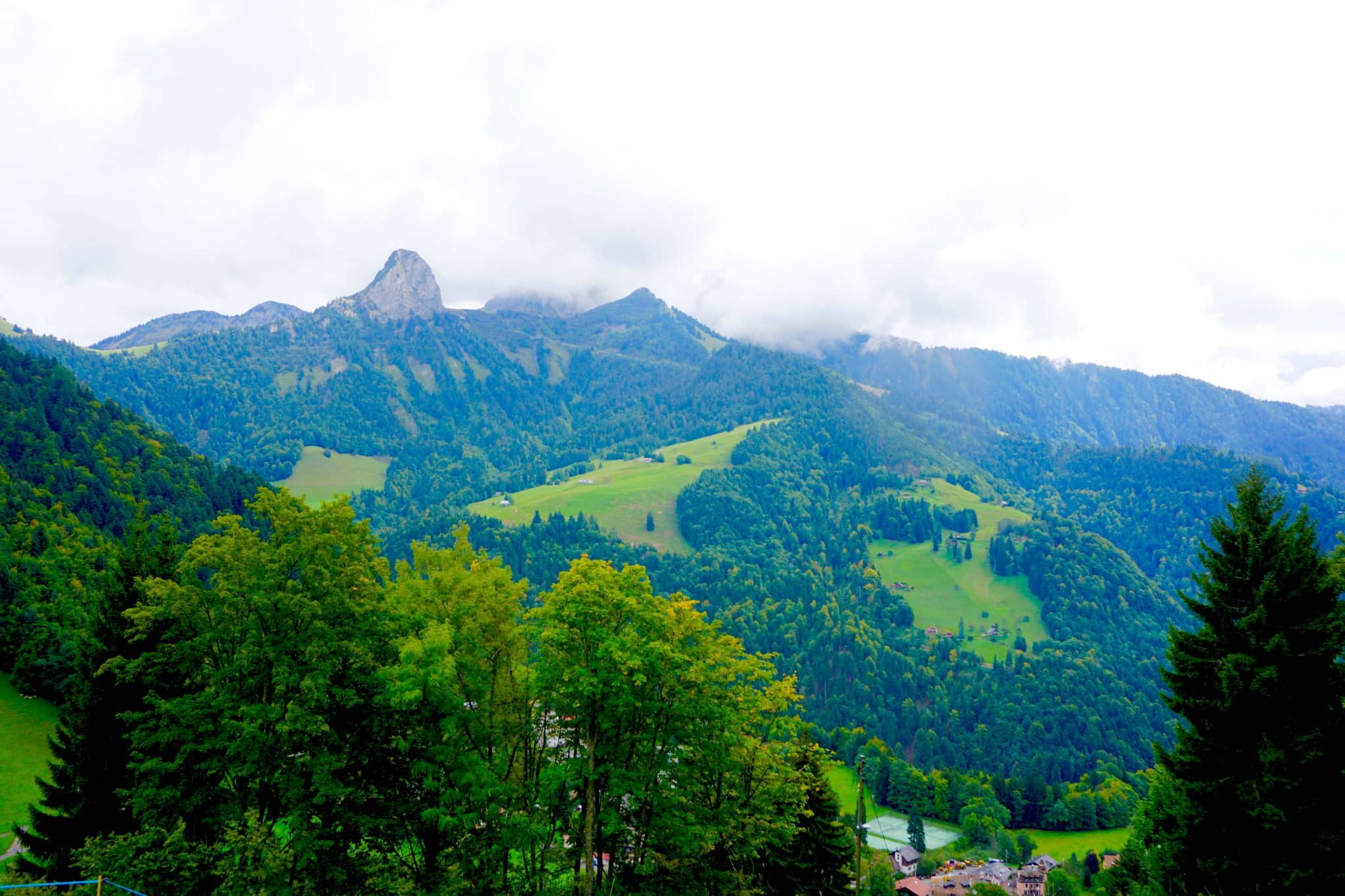 One of the best parts about Geneva is that it is strategically located next to several other equally impressive towns. I fell head over heels with the quant and cozy town of Montreux, filled with serene lakeside views and engulfing mountains. 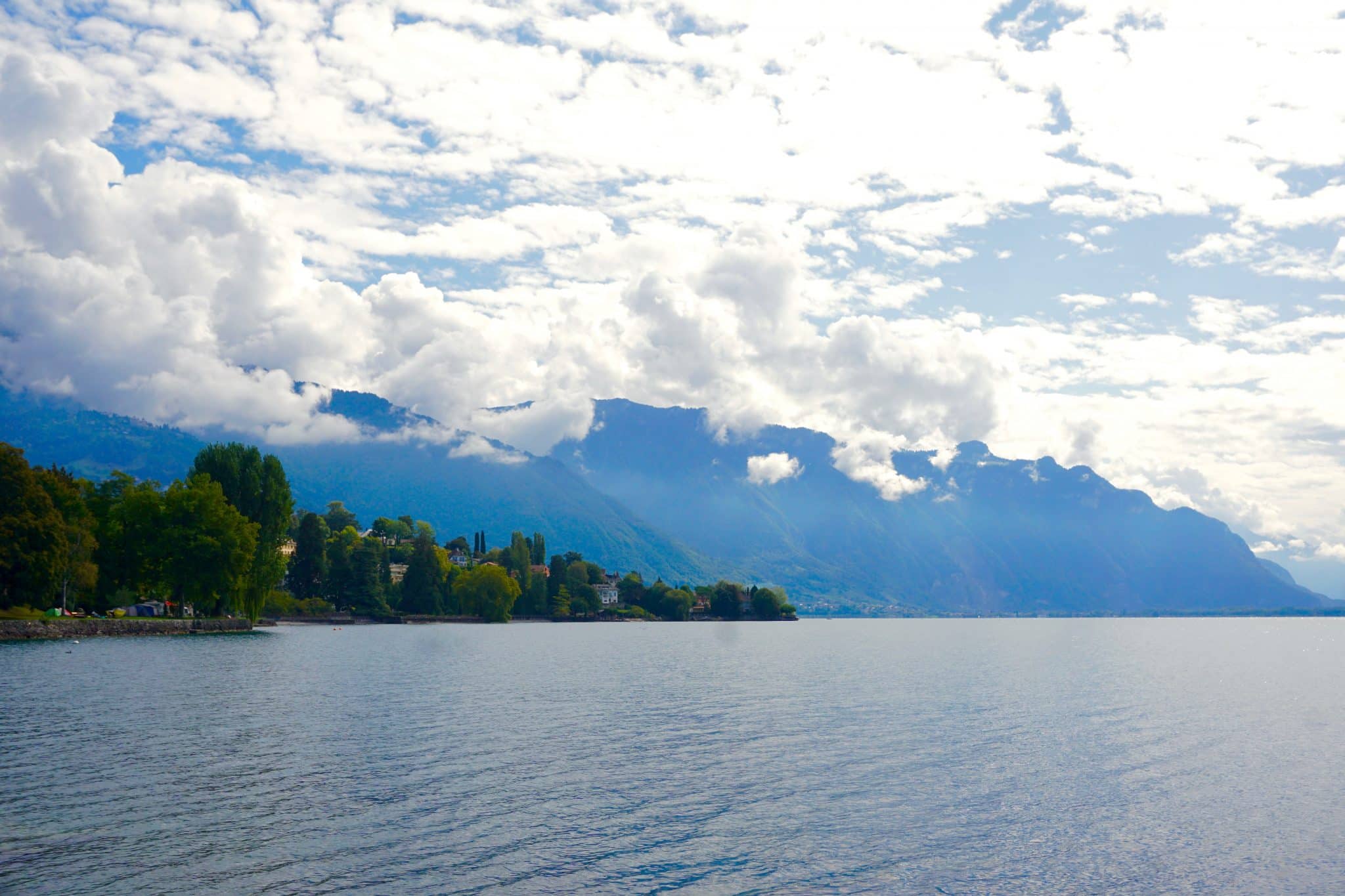 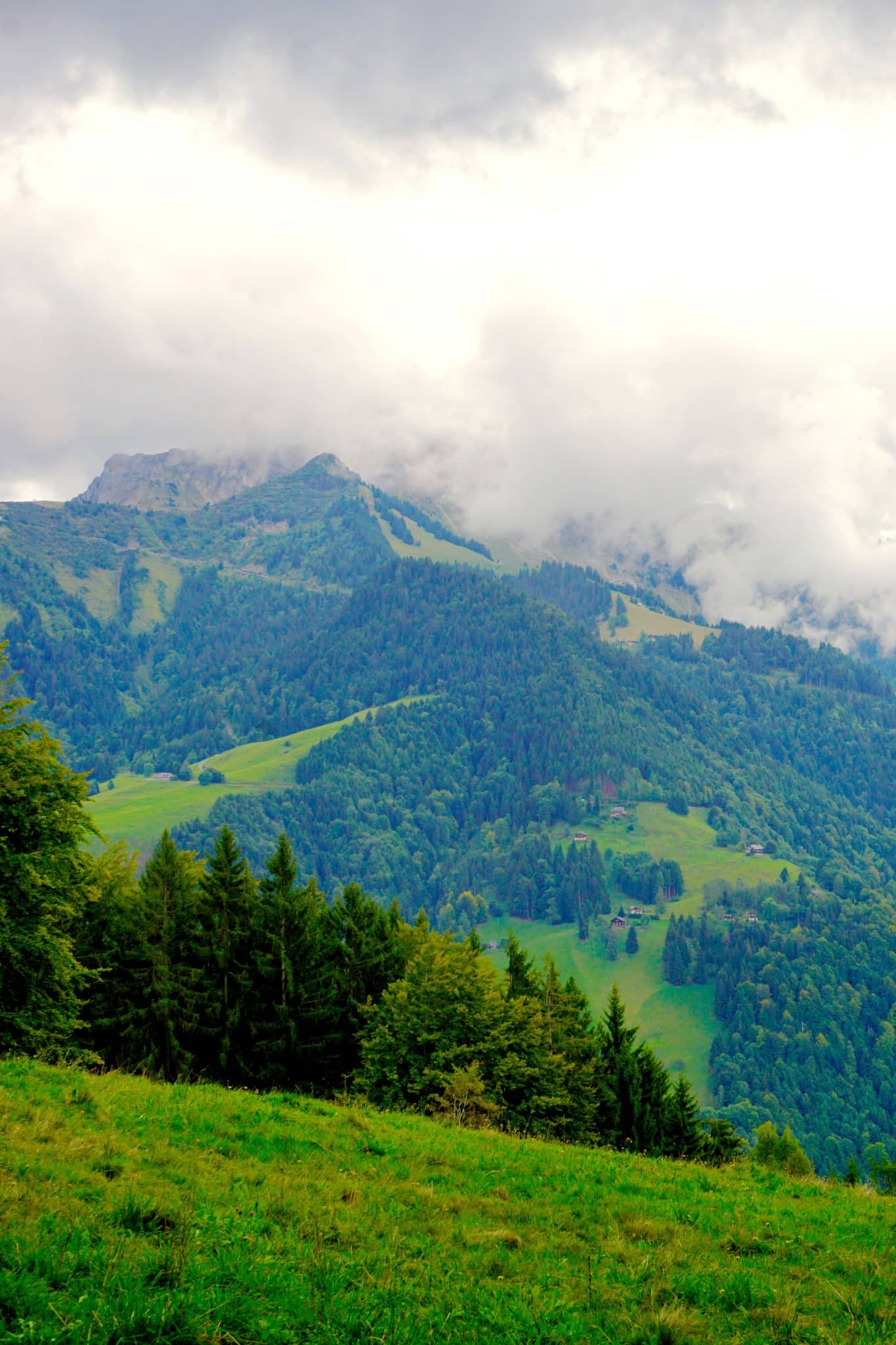 This is one of the best places to hike, with various trails and even hidden towns in the mountains! Montreux is about 45 minutes from Geneva by train, and it will cost around 50-60 Francs for a round trip ticket.

Here are the best hikes in the Montreux region.

Where to drink and eat in Geneva

This is easily where you’ll probably spend most of your money in Geneva, so I recommend only eating out a few times. A typical meal can cost around 40 Francs, and a glass of wine can start at even 15 Francs. Although the prices are steep, the quality is often very satisfying.

I went to this restaurant for my birthday, and was totally blown away. The entire menu was vegetarian AND gluten free (perfect for me), and reasonably priced at 35 Francs for 3 courses during lunch. Make sure to try some of their delicious crepes!

Other great restaurants are Mu Food and Vert Apetite.

But if you’re really looking for a more affordable and authentic experience, I recommend buying a bottle of wine and some snacks and having a picnic by the lake in true Geneva fashion.

I loved the mixology and overall funky vibes of this cocktail bar. I even met a Swiss man with his wife, probably 50+, who just got a tattoo of a hand giving the middle finger. You can’t make this stuff up!

Another great place to try is Petite Reine, which has a more down-to-earth hipster vibe.

Another cultural note is that it is common for people to buy you drinks as a friendly gesture. It doesn’t necessarily mean they are hitting on you.

Some couple bought my friend and I drinks, and then didn’t say more than a few words to us. Maybe they heard us complaining about how expensive it is.

But most likely, it was just their way of saying, “welcome to Geneva!” 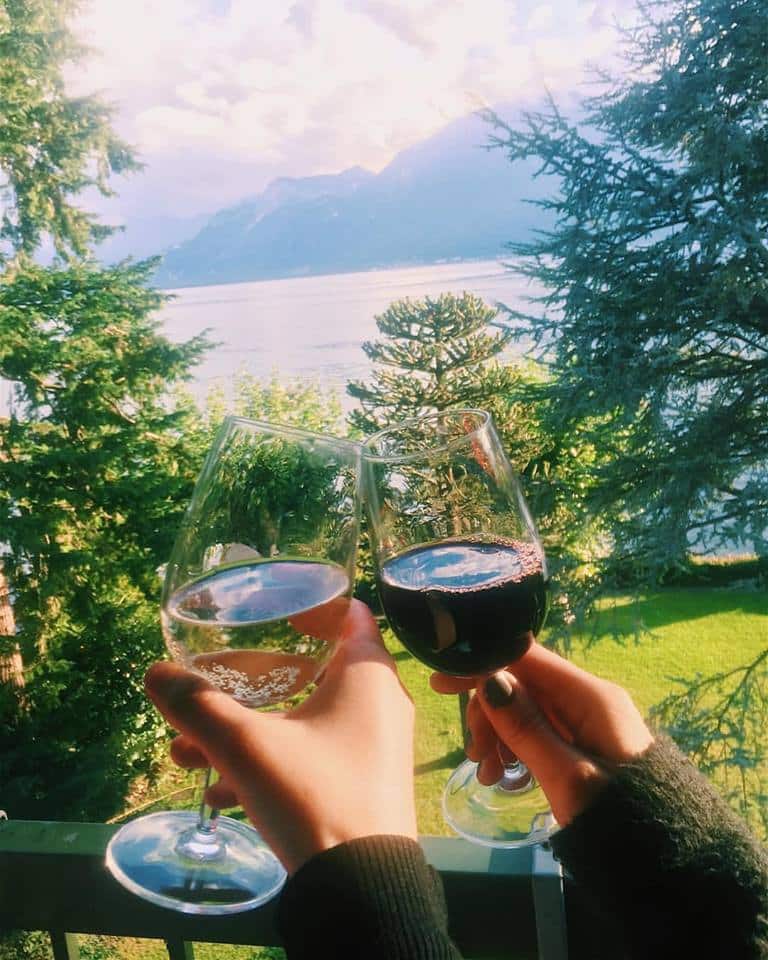 If you haven’t already, make sure to check out all of my Europe travel guides for more insider tips!