My First Time Solo Travel Trip (And What I Realized) 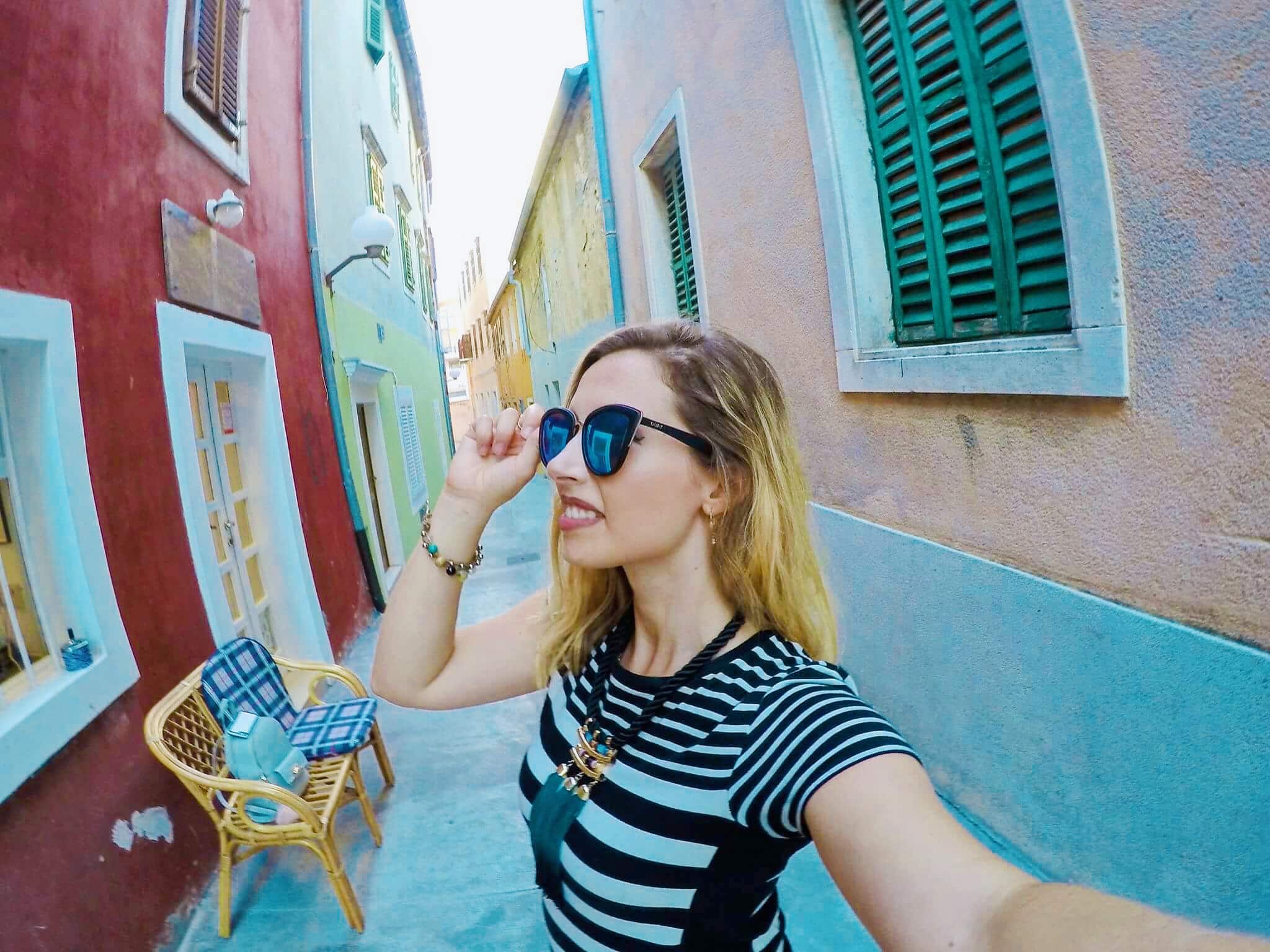 It was something I was terrified of at first, but knew I needed to do. I kept putting it off for weeks until I finally came to the conclusion that if I don’t do it now, I never will. I wasn’t sure why I had such a strong urge to go, but I soon found out why.

Last night I just returned from my first time solo travel trip, one of the most memorable trips I’ve taken to date.

When most people hear a young woman say she’s going to travel alone, the questions are why?” “Don’t you want to wait for your boyfriend to go with you?” “Have you seen the movie Taken?” “Aren’t you scared?” “HAVE YOU SEEN THE MOVIE TAKEN?” I’ll admit I never imagined myself traveling alone, until I saw how many other women are doing it too, all around the world.

I made up my mind earlier this summer that I wanted to travel more around Croatia. I decided I would visit, Split, Zadar, and Zagreb, over the course of five days. I decided I was doing this for me, and I was going alone.

Through my solitude and experience as a lone-traveler, here’s what  my this first time solo travel trip taught me: 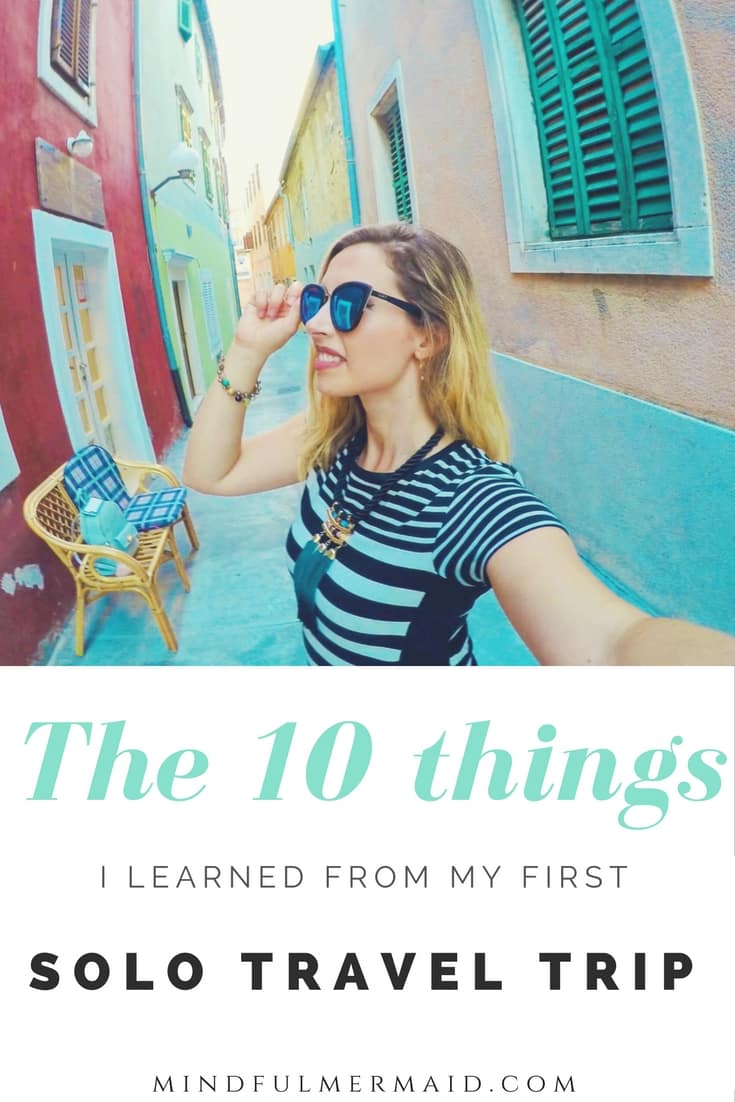 My trip was off to a rough start, most likely from me manifesting nervous energy. First I lost my ferry ticket, got yelled at, found it, and then thought I lost my passport. I had too much caffeine and was wired for four hours from Dubrovnik to Split. Then, when I got to Split I had two weird experiences with creepy taxi drivers. I was now thinking ahead of every worst-case scenario.

It turns out that after these little episodes, everything ended up falling into place and going rather smoothly. I realized on this trip that anything (everything) that I’ve ever freaked myself out about ends up working out with time. School. Relationships. Work. I realized that we all freak out when we aren’t patient enough for things to fall into place. I’m usually the most inpatient person in the world, but that started to change after this trip.

Yep, I’m guilty of complaining, just like everyone else. Of course it’s healthy to blow off steam and let yourself be upset from time to time, but it’s really easy to stay in this habit. When I was traveling alone all day, I really didn’t have anyone to complain to. “My back hurts. It’s hot. Wow, that person was rude.” Without verbalizing these small day-to-day thoughts, I honestly started to pay less attention to them.

It’s really hard to be positive when you give negative thoughts a lot of energy, which tends to make a small situation into a big deal. I realized that complaining is a habit I need to knock in order to be more mindful and positive. 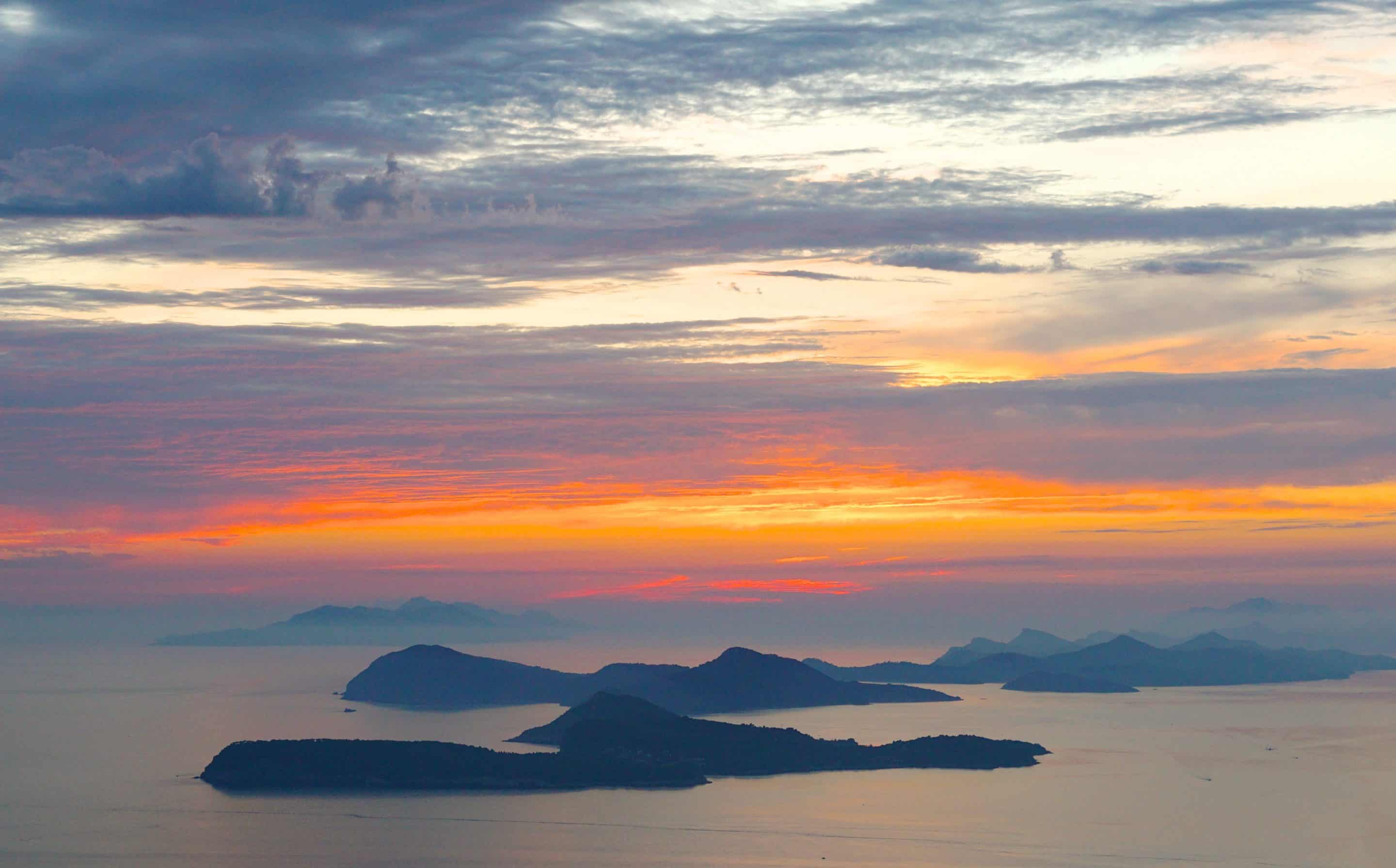 Trust your instincts, sense of direction, and intuition. It’s really important to have faith in oneself, as cliché as it sounds. You need to trust that you’ve obtained the skills to conquer whatever challenges come your way.

I honestly have never really felt unsafe in Croatia, but perhaps that’s from perfecting my Chicago strut. To avoid potentially weird people or anyone trying to sell me things, I always walk with a purpose, like I don’t have time to stop for anyone’s bullshit. I’ve avoided a ton of situations and made my way through crowds twice as fast by doing this. Be confident and let it show. 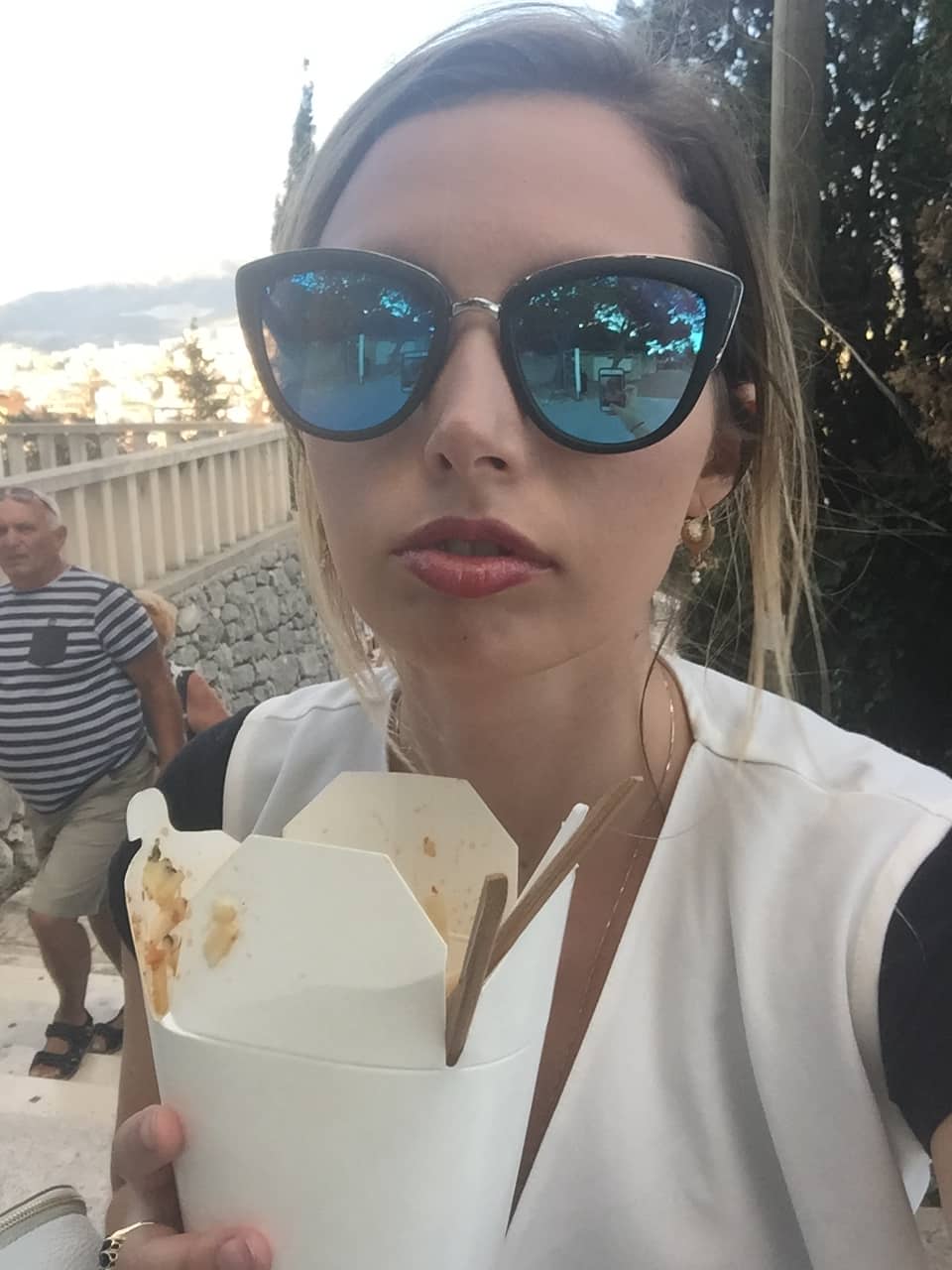 I think one of the main reasons people don’t travel alone is that they’re afraid of what people will think of them, and also just in general. What a waste of time. I’ve known my whole life I’m 100 percent okay with being on my own, and don’t care if I’m eating, shopping, or doing anything alone. I also don’t care if anyone judges me for devouring some Asian noodle dish in the park, because I’m enjoying myself. You need to learn to do what’s best for you, and ignore irrelevant people.

And by experiences, I also mean food. I’m slowly becoming a minimalist and barely buy any material possessions anymore. In life and travel, I learned to not get caught up in the fact that you need things to remember moments and memories. I’d rather have a really bomb meal and see something new instead of buying a new dress from Zara that I don’t need.

This was perhaps the most important takeaway from my trip. In order for all of us to share our light with the world, we all need to build a healthy relationship with ourselves. We can have supportive family, friends, and boyfriends, but it’s important to always come back to oneself for support. In an era surrounded by constant digital stimulants, carve out time for solitude. You will find that with a little silence you may hear the answers much louder. 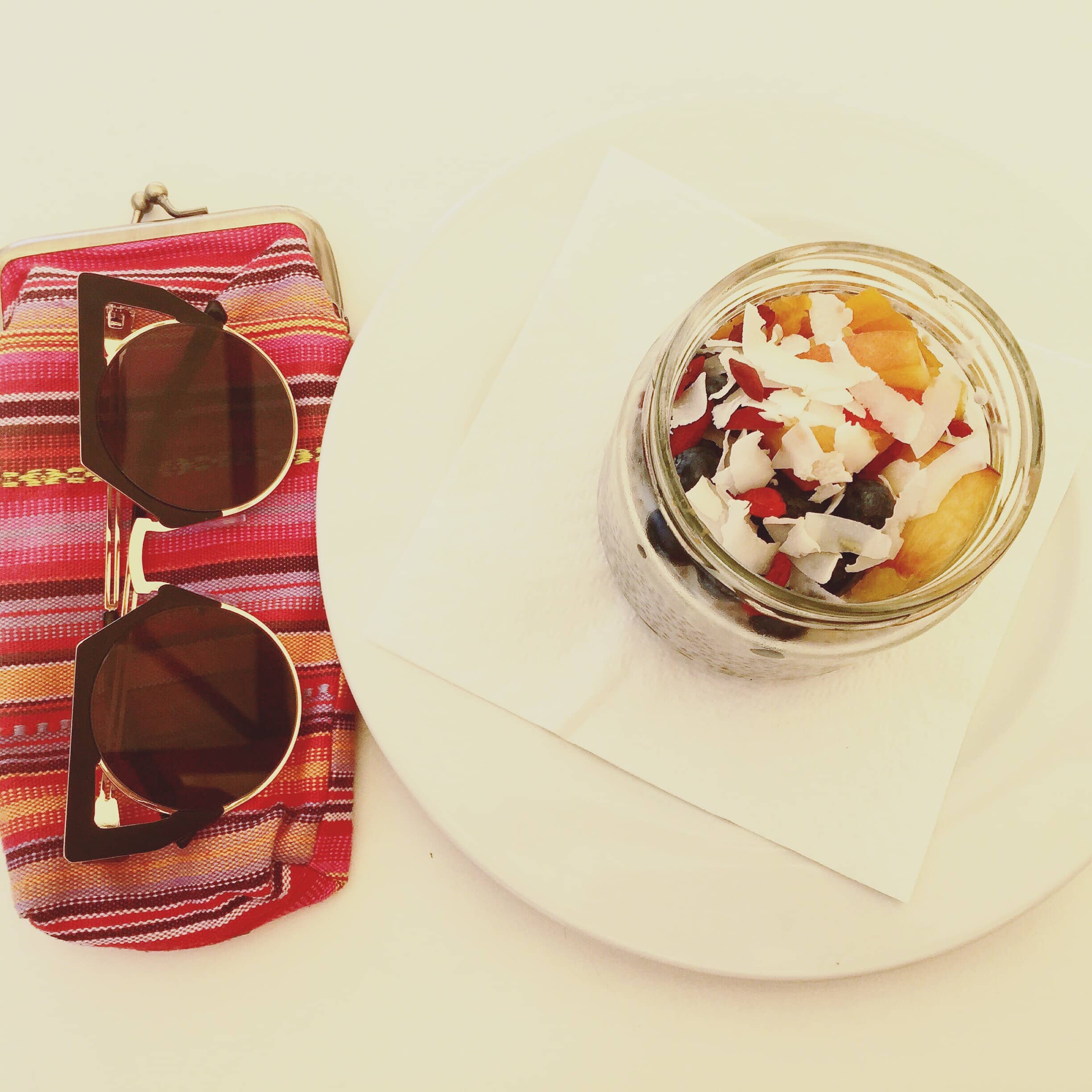 I really feel like my “home” is a combination of Minnesota, Chicago, and Dubrovnik. However, I realized that there are specific things that make me feel at home, such as finding a gluten-free restaurant, listening to live music in the park, or meeting like-minded friends. Though I’ve loved being a mermaid in a village this summer, I can’t escape the effect Chicago had on me. I still crave the buzz of city life, and Zagreb really gave me that feeling again (to be continued).

I recognize that traveling in general is a privilege, and so is traveling solo. However, find something new you’d like to try, and do it on your own. Maybe you want to backpack in Canada and no one else is interested. Maybe no one wants to visit that new bar that opened up in your neighborhood. Maybe you want to learn to paint. I’d say do it. Do it for yourself, and by yourself. Don’t wait for anyone to give you permission. 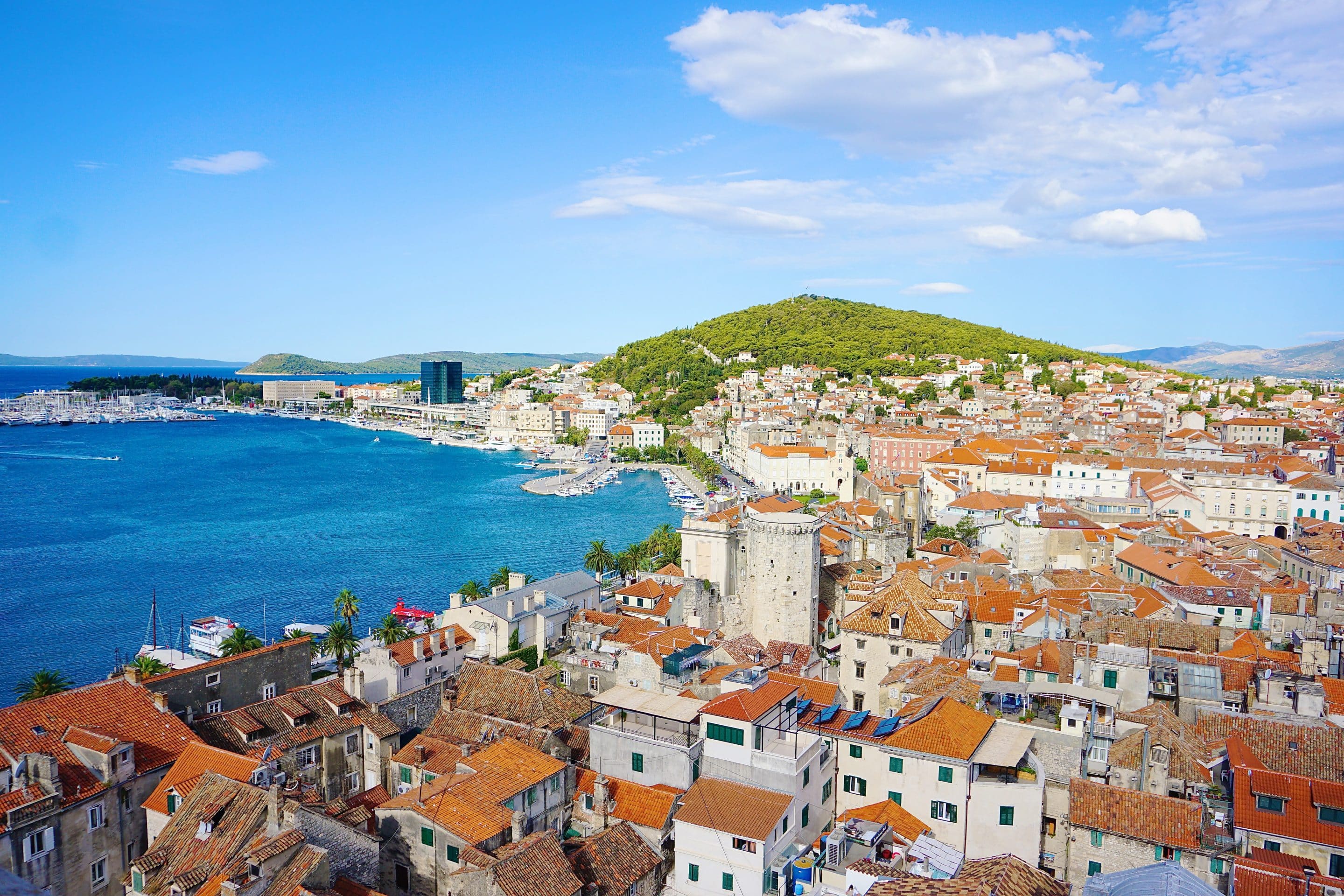 Thanks for reading this week! Stay tuned for my post about Zadar and Split later this week, and Zagreb the following! Like what you read? Share or comment below to support a girl blazing her own trail in this crazy world.