Tavulin Wine and Art Bar: A Taste of Authentic Dubrovnik 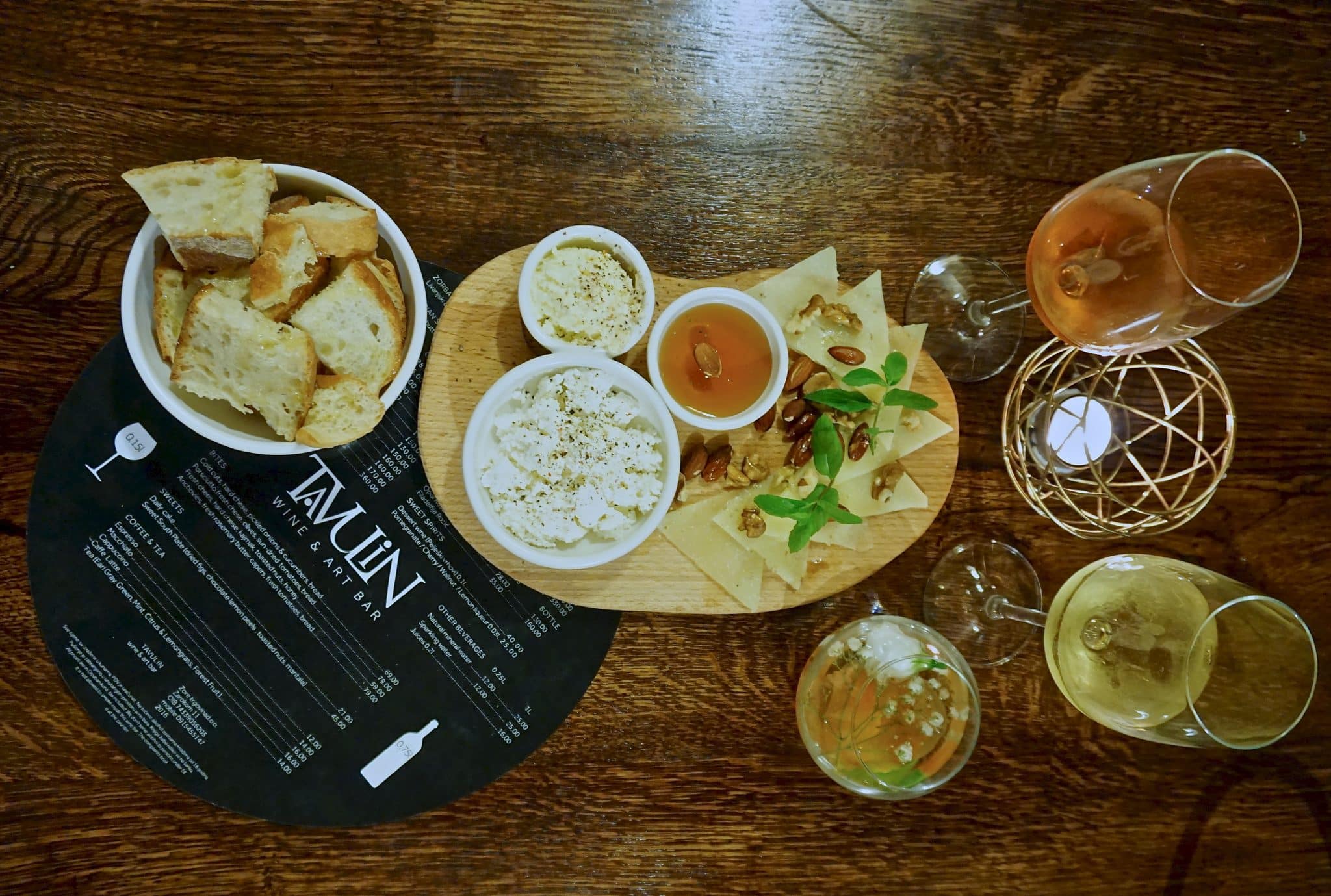 (My piece was originally published in Croatia Week)

You can hear the faint jazz music in the distance complimented by a quiet chatter and a gentle clinking of wine glasses. Freshly painted artwork is delicately placed along archaic brick walls. The dimly lit candle light illuminates a quaint side street of Dubrovnik’s Old Town, secluded from Stradun’s commotion. It’s as if this venue is purposely hidden, attracting only those willing to discover a less commercial, local experience.

Tavulin is Dubrovnik’s premiere local wine and art bar, putting just as much effort into its products as its service. Exclusive local wines from the surroundings Dubrovnik regions are matched with a selection of paintings from local artists. Tavulin provides a taste of authentic Dubrovnik.

“We wanted Tavulin to evoke all the senses, and we think wine and art are a good match,” said Tavulin manager, Nina Zore.

Nina Zore and her family’s passion for wine is rooted in their own backyard—literally. As producers of wine in the Konavle region, the Zore family knows first-hand about quality wines. That’s what inspired them to embark on a new business venture and bring a taste of Konavle into Dubrovnik’s Old Town. In a matter of a few months they transform their former office into a chic wine bar. Thoughtful planning became a reality when Tavulin opened its doors on July 20th, 2016.

Not only does Tavulin serve their own wine (Zoro), they also serve Merlot and Cabarnet Sauvignon from the surrounding regions of Konavle and Pelješac region. “It doesn’t make much sense to be importing wines from Chile, Argentina, and the United States when we already have excellent Croatian wines here,” Nina said. Tavulin proudly serves local brand such as Rozić, Malvasija Dubrovačka Zoro, Pošip, and Matusko.

However, the Zore family had a vision more than just a wine bar. “I wanted it to be a place to directly support local businesses, which is so important in a transitional democracy like Croatia,” Zore said. “So I figured since I know artists myself, why not pair local wines with local artwork.”

The neutral brick walls of Tavulin display a variety of colorful paintings. The Zores say their goal is to help artists sell their work, while also giving visitors a slice of new-age Dubrovnik artwork.

Since July 2016, Tavulin has already held two art exhibitions. The first exhibition featured Dubrovnik native Ana Milekić, who portrays abstract and avant-garde portraits colors through her artwork. The event enabled Milekić to engage with Tavulin’s customers in pursuit of selling her paintings. Milekić was able to successfully sell three of her paintings through the exhibition. 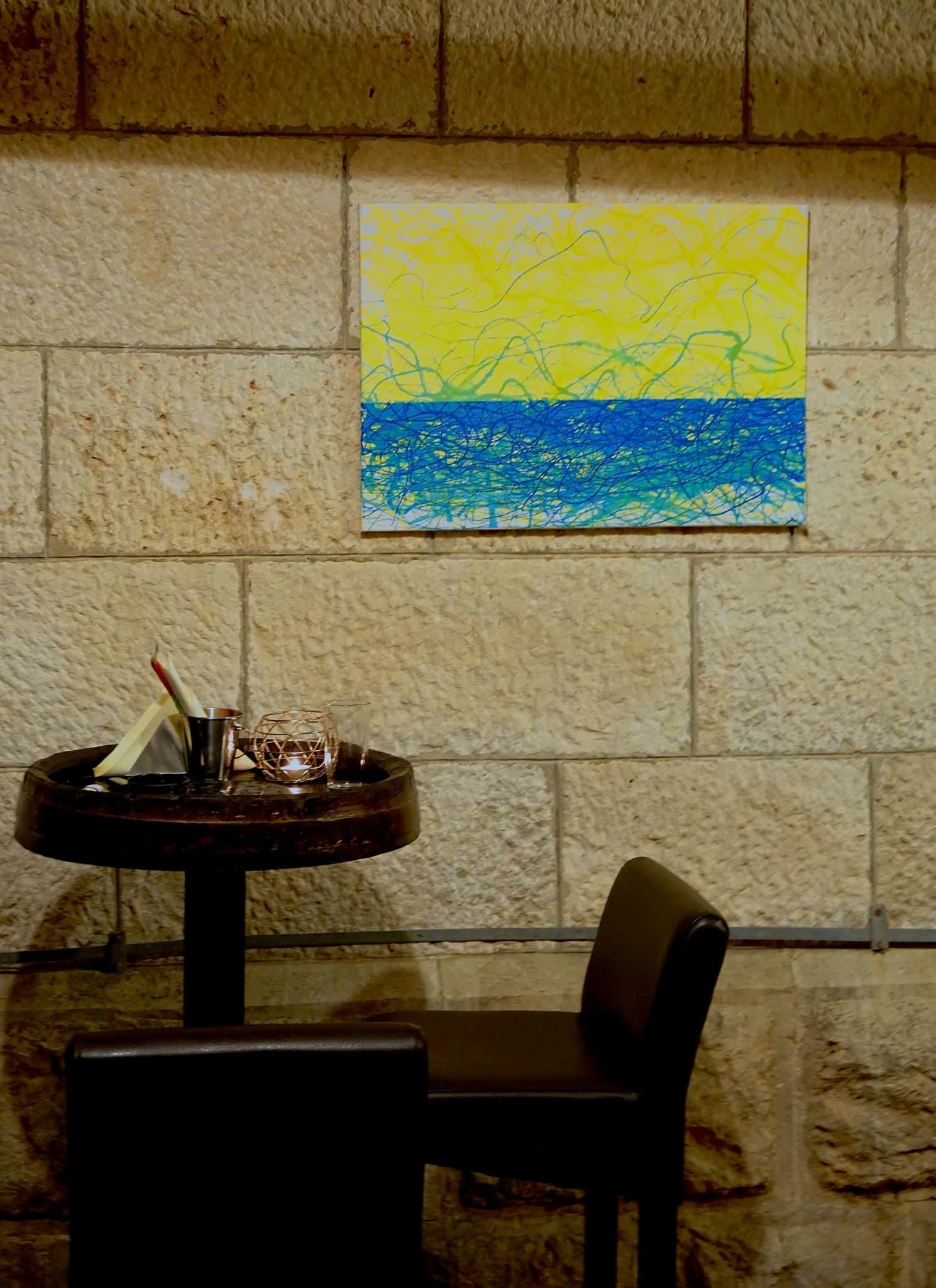 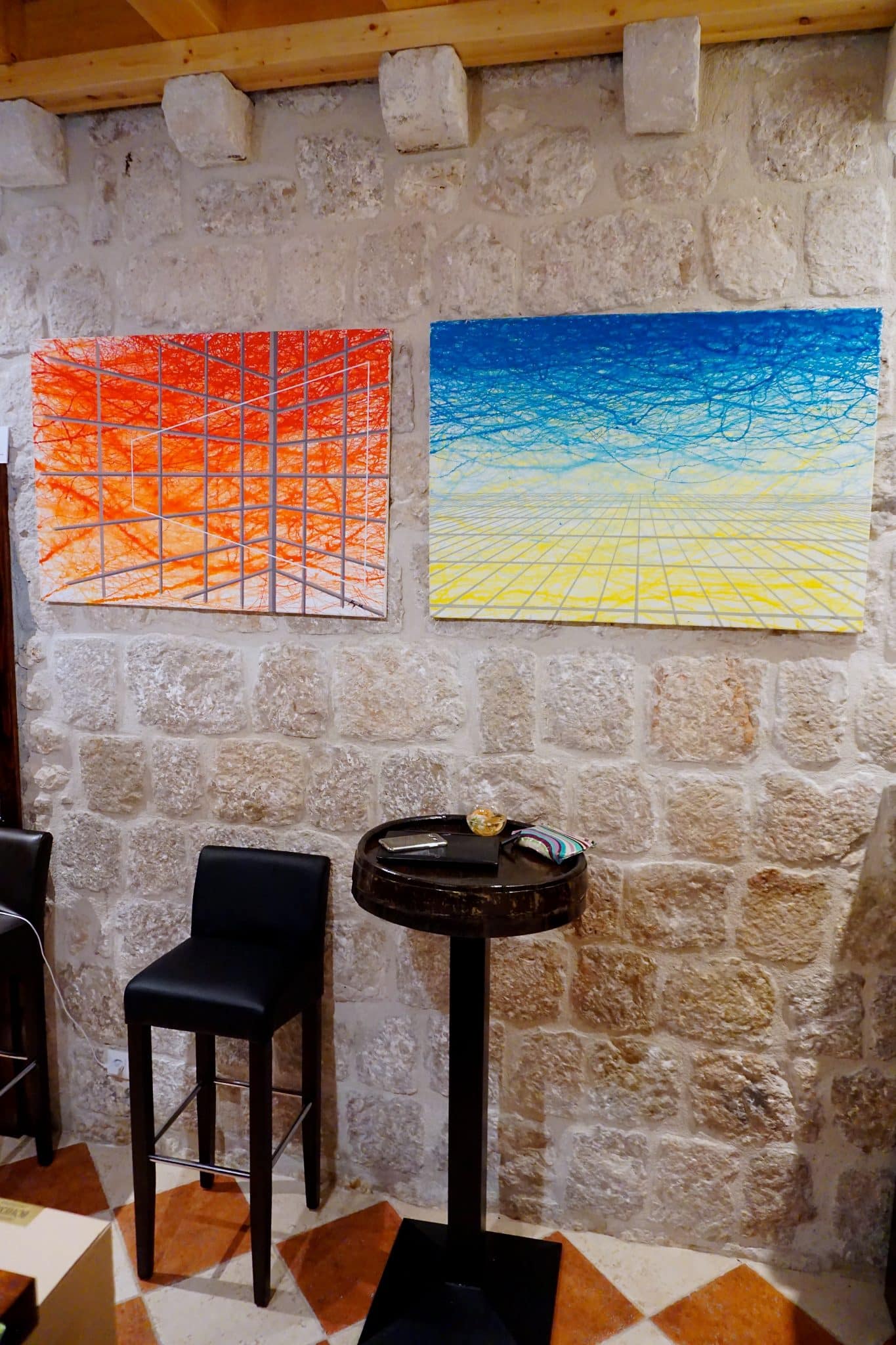 The second exhibition featured local artist Matija Tomšić, who dips sewing thread in paint as his paintbrush. At the exhibition he was able to paint his pictures on the scene by using his technic he acquired while in art school. His paintings are still on display at Tavulin.

Service, in more ways than one

Quality over quantity is the mentality within Tavulin. The wine bar has performed exceptionally well for being in its enfant stages, yet it won’t be expanding anytime soon.

“We have other restaurants tell us ‘wow! You guys are doing great! You should really add more chairs to bring in more people!’” Zore said. “We want people to come, of course, but we want to make sure our staff maintains proper contact with each and every customer.”

With less than a dozen tables, Tavulin’s intimate environment is a striking contrast to majority of restaurants, cafes, and bars in the Old Town. Customers take refuge in the tranquil, yet energizing ambiance. 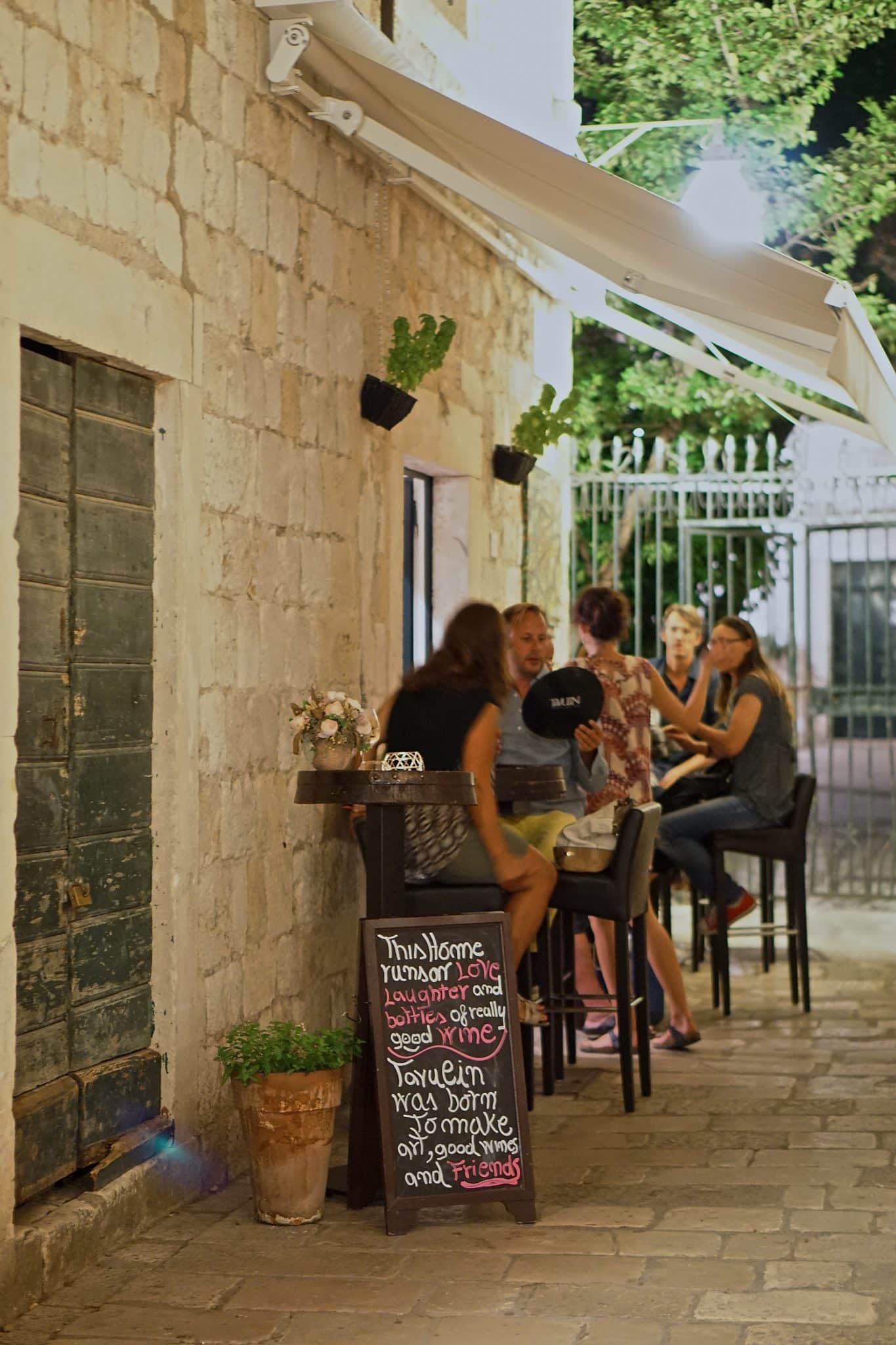 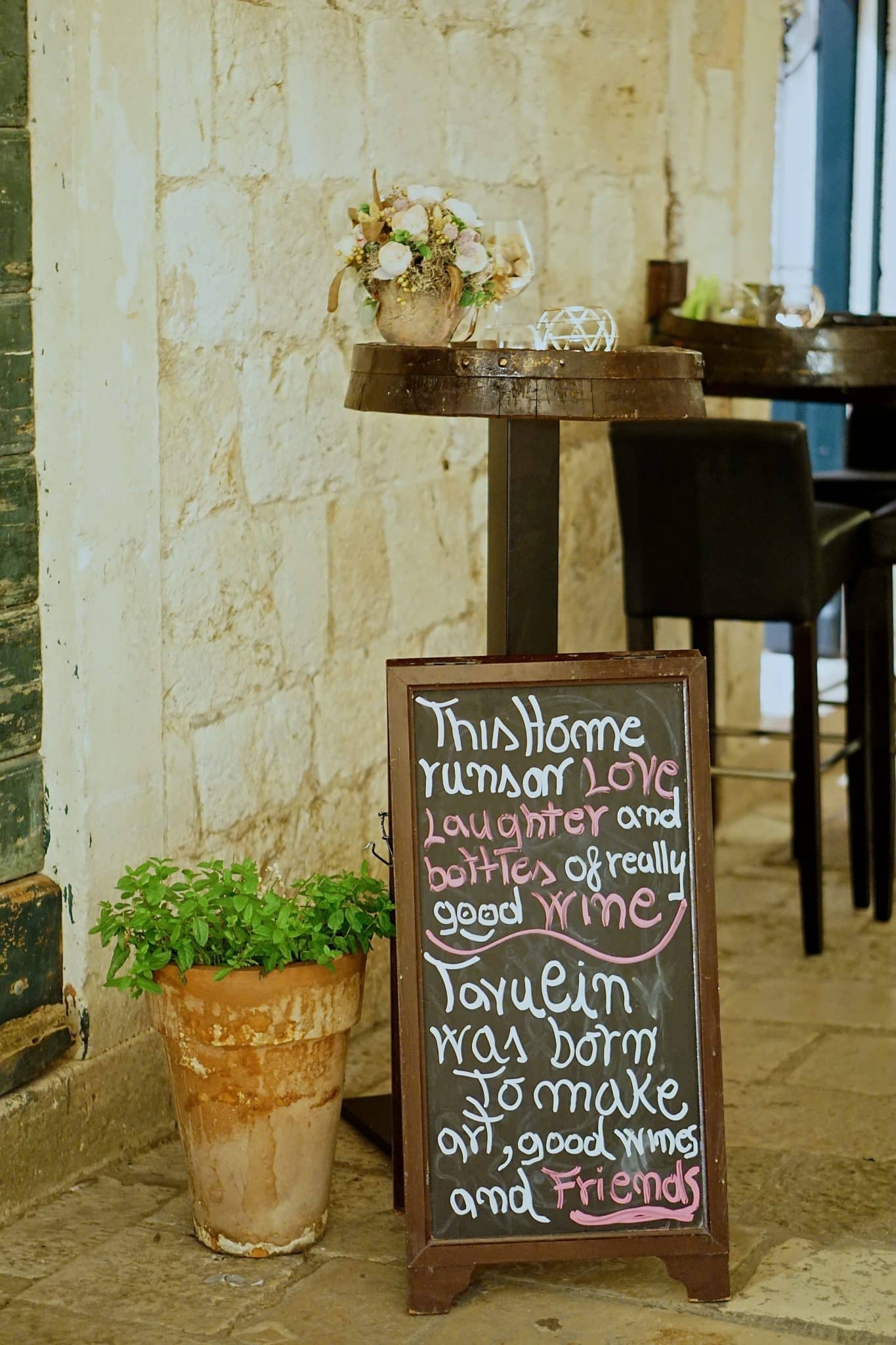 However, perhaps what is most unique about Tavulin is how it brings in pieces of Dubrovnik’s surrounding regions to the Old Town. “Here, we would really love to teach people more about other regions in the area,” Zore said. “We love when people ask us questions about our wines, and we can tell them a bit more about each of the places.”

So far, Zore has sent several curious customers for tours of the Konavle and Pelješac region. She said that her goal would be to see surroundings areas flourish like Dubrovnik has.

“Life is about learning when you don’t feel like you’re learning,” Zore said. From my visit to Tavulin, I learned just as much about the Dubrovnik mentality than I did local art and wine.

*This blog post was brought to you by a partnership with Tavulin Wine Bar. As always, all opinions are my own.