How to Take a Sintra Tour From Lisbon by Beetle

If Lisbon is for hipsters, then Sintra is definitely for lovers. This area filled with UNESCO world heritage sites is known as the birthplace of Portuguese romanticism and boasts some of the country’s most elegant palaces.

With the mountainous terrain stretching over 300 km, the most practical way to experience Sintra is by car. That’s why we hopped in a vintage convertible with Lisbon By Beetle for one romantic getaway we will never forget. Here’s how to take a Sintra Tour from Lisbon. 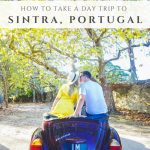 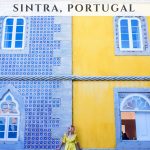 Why we chose Lisbon by Beetle

Sintra is probably the most popular day trip to take from Lisbon, but it takes a fair amount of planning. The monuments are very spread out, so it’s impossible to walk everywhere. It’s also impossible to see everything in an afternoon, or even a day, which is a mistake many tourists seem to make.

You can get to Sintra by train and then take a hop on hop off bus, or there are several organized tour buses. However, it seemed like a lot of running around to me, and we wanted something a bit more intimate and authentic.

That’s why Lisbon by Beetle was a perfect fit. I was first drawn to the company via Instagram, and read a ton of raving reviews on Tripadvisor. My boyfriend, Domeniko, loves old cars, so he was also sold immediately. So, we took a full 8-hour day trip with a private driver, and were off for Sintra by 9 a.m.!

Sintra in itself is magical, but I think the beetle convertible made it feel all the more romantic. Serious “Once Upon a Time” vibes, right? 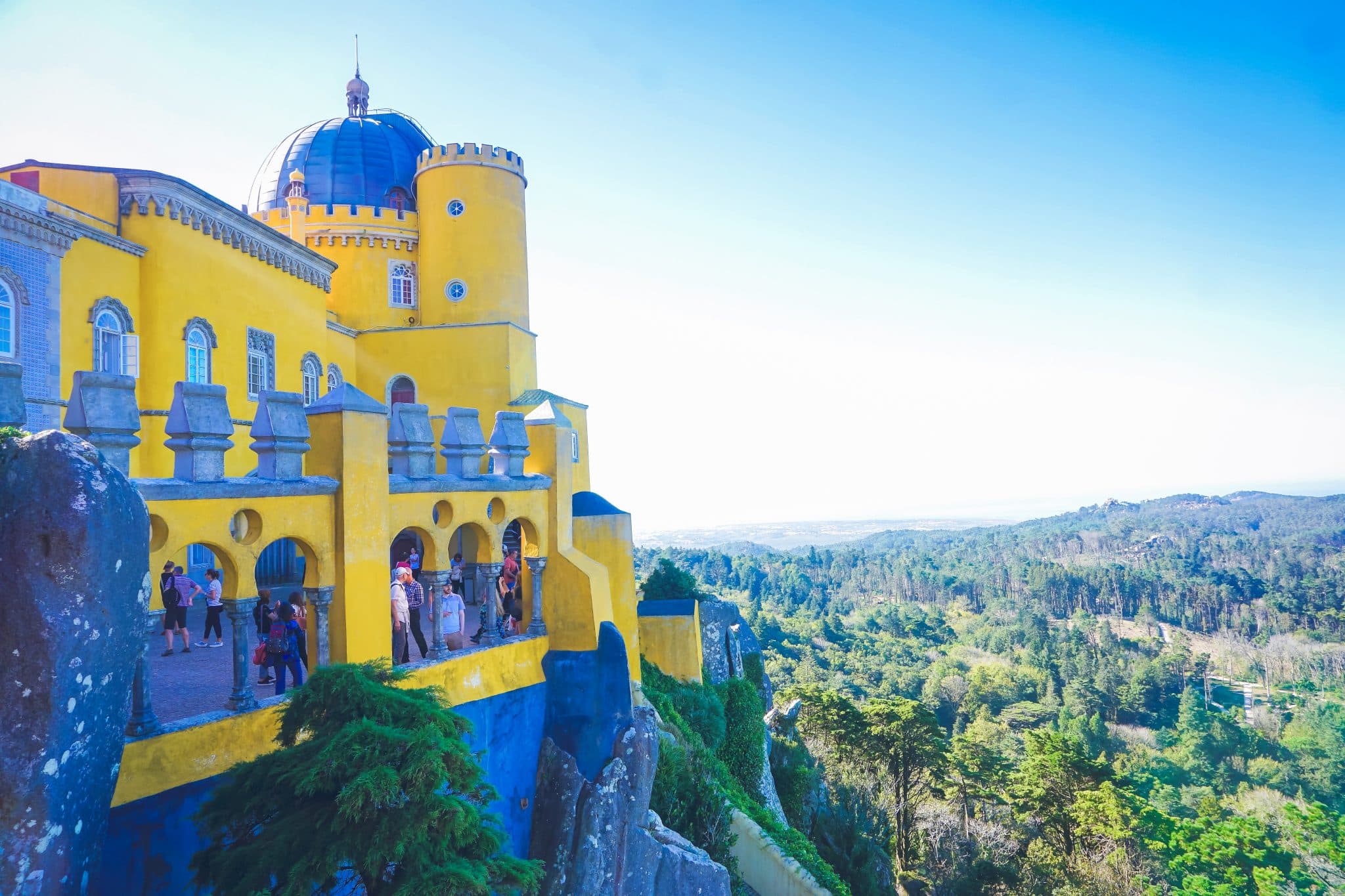 Our driver ended up being from Sintra himself, so he was full of facts, history, and all of the insider knowledge. The town came to be when Portuguese royalty built summer homes in this microclimate to escape Lisbon’s heat. Since the town is higher in the mountains, you can actually feel a noticeable different in air temperature, even though it’s only about 30 kilometers outside of Lisbon.

Dating back to the 1800s hundreds, Sintra was at the forefront of romanticism in Portugal. Musicians and writers took refuge here in the mystical atmosphere. And honestly, who could blame them?

Perhaps what I find most fascinating is that Sintra was apparently a ghost town 10 years ago. It’s only been over the last decade that tourism started booming in this area. Our driver, Joao, told us that growing up he would go the castles to hang out with friends (casual), as they were all completely open with practically no visitors.

Now, each palace operates as a separate monument or museum, with tourists from all over the world coming to visit (Instagram) these majestic wonders.

Best Things to see on a Sintra Tour

Like I said, it is impossible to see all of Sintra in one day, so I would recommend picking two, tops three, monuments you want to see. 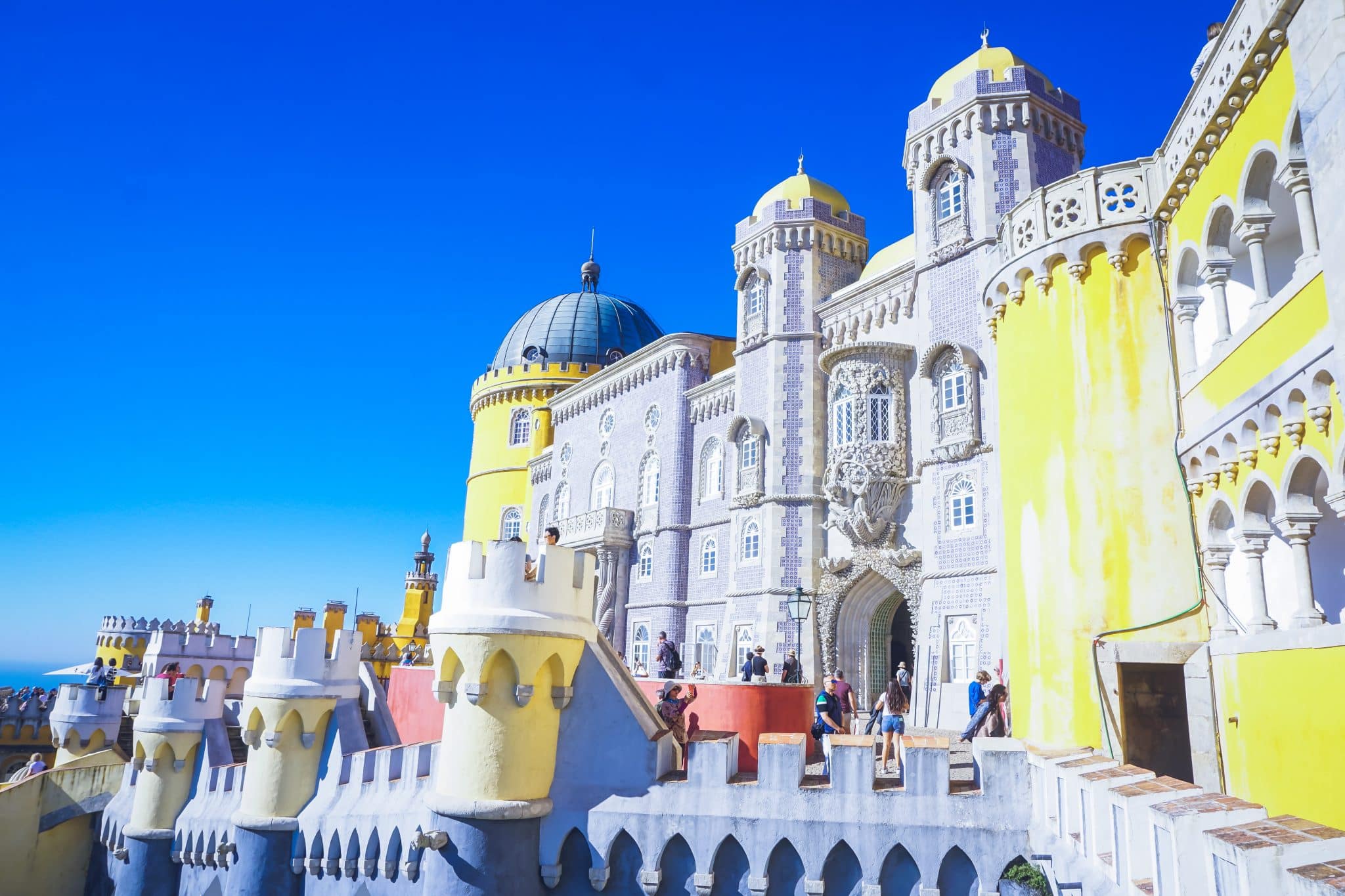 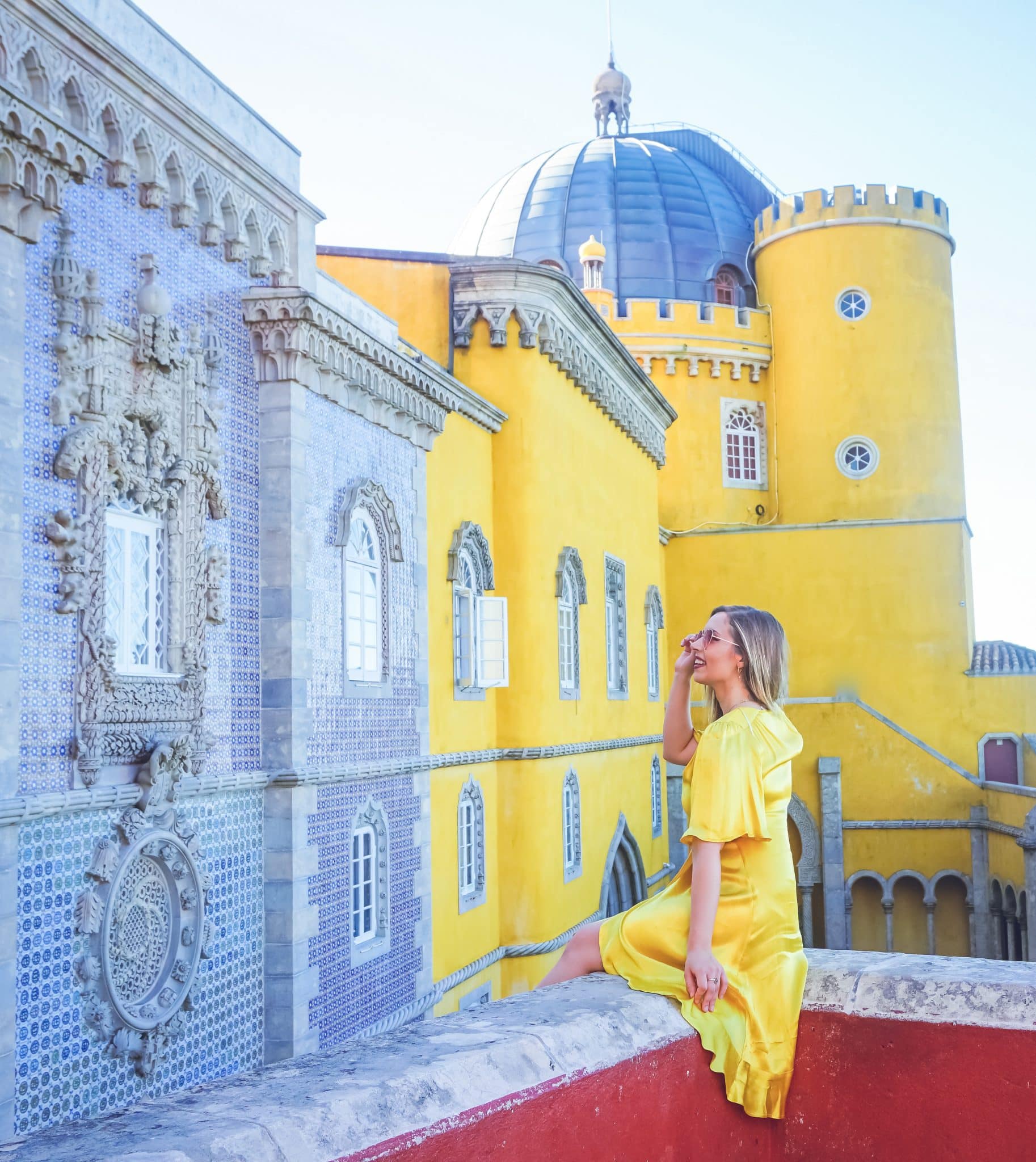 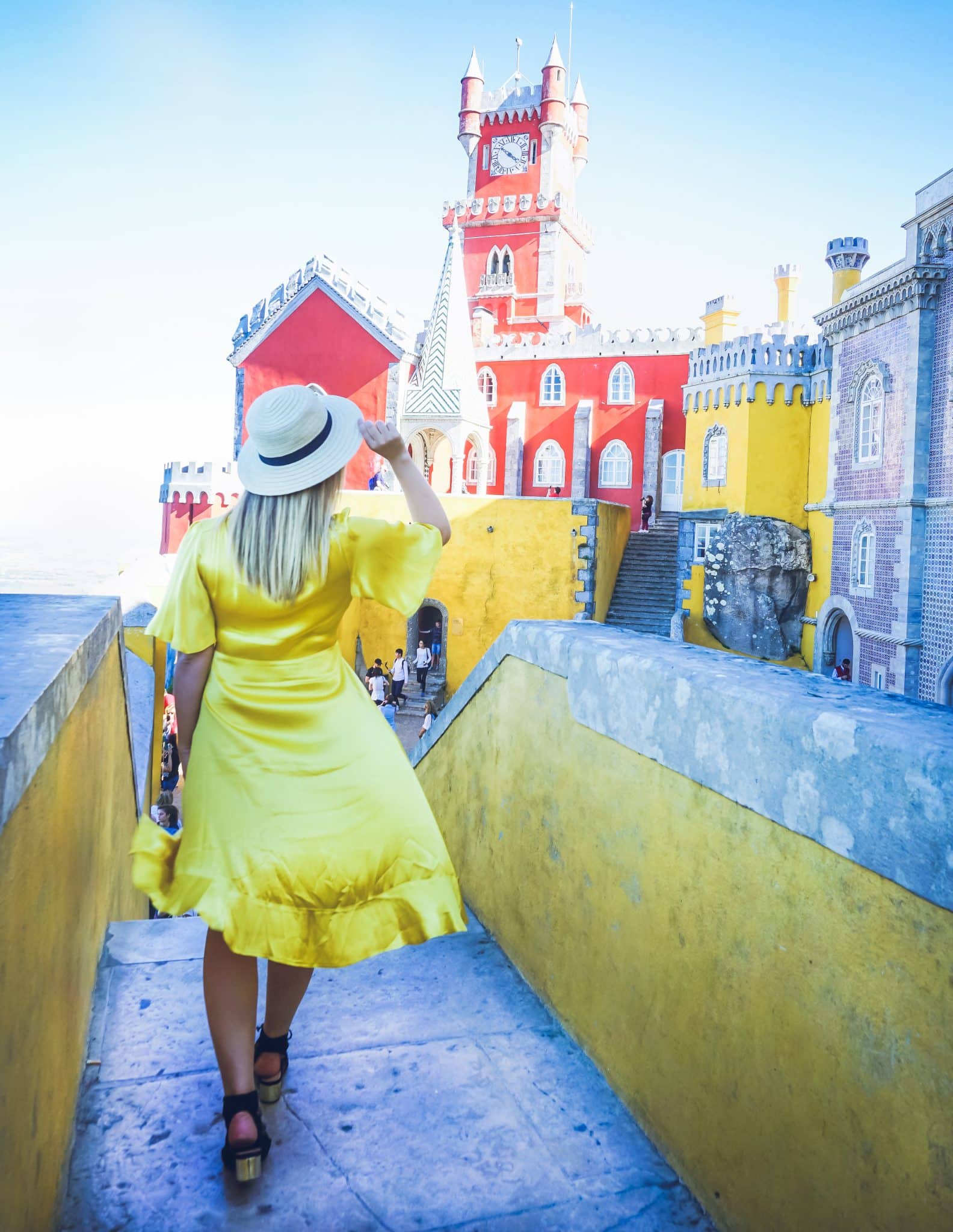 We first headed to the Pena Palace, the colorful estate atop a cliff overlooking a sea of forest. This is the most popular monument in Sintra, and once you see it in person, you’ll see why.

This recently classified UNESCO World Heritage site dates back to the 12th century, when the only monument on the property was the “Our Lady of Pena” Chapel. It wasn’t until the mid 1800s that the “New Palace” was underway, and took 45 years to complete!

What I love most about this palace, aside from the fairytale charm, is that it really shows so much into Portugal’s past. The archways and interior design show the influence from the Moors of Northern Africa, mixed in with traditional Portuguese tiles. 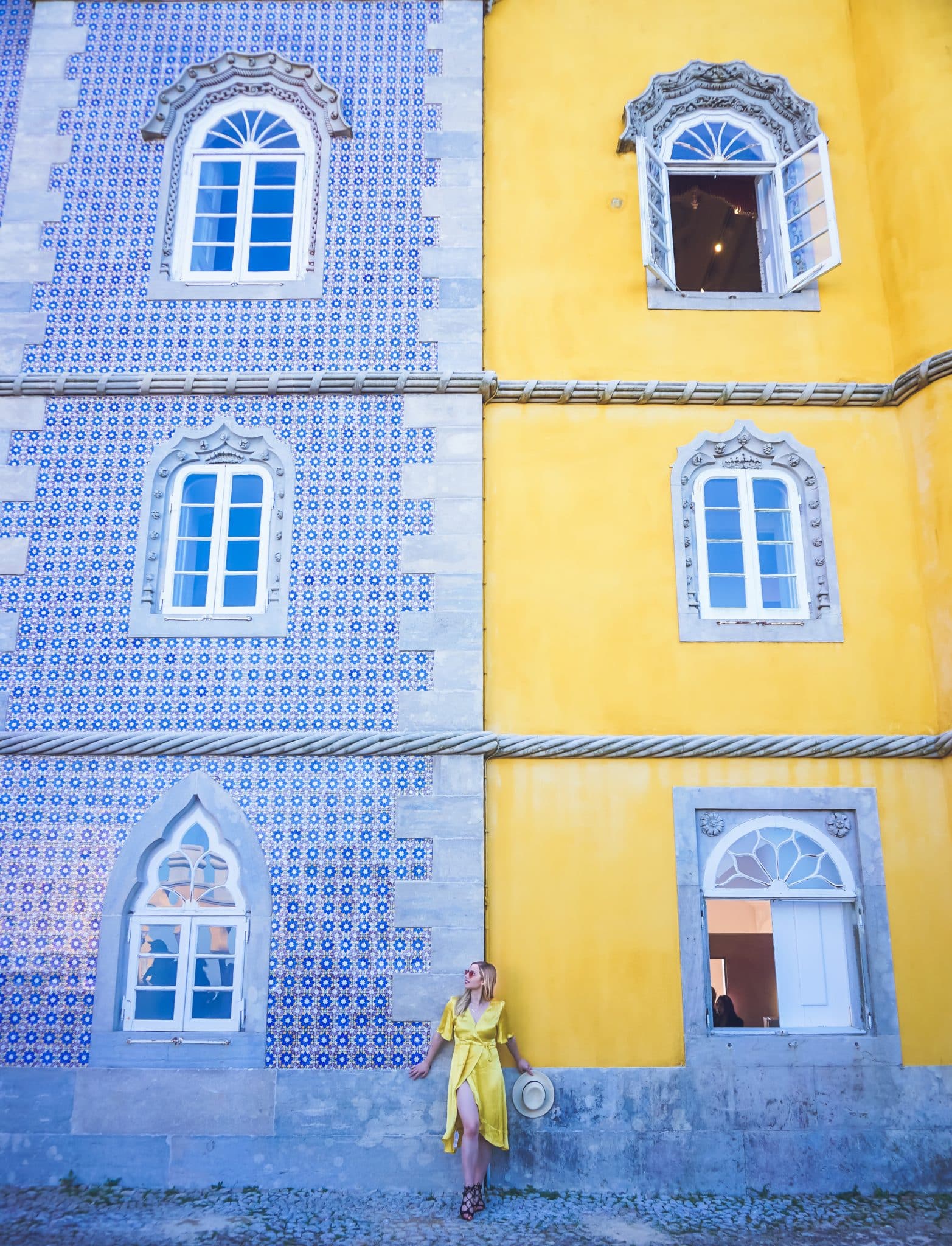 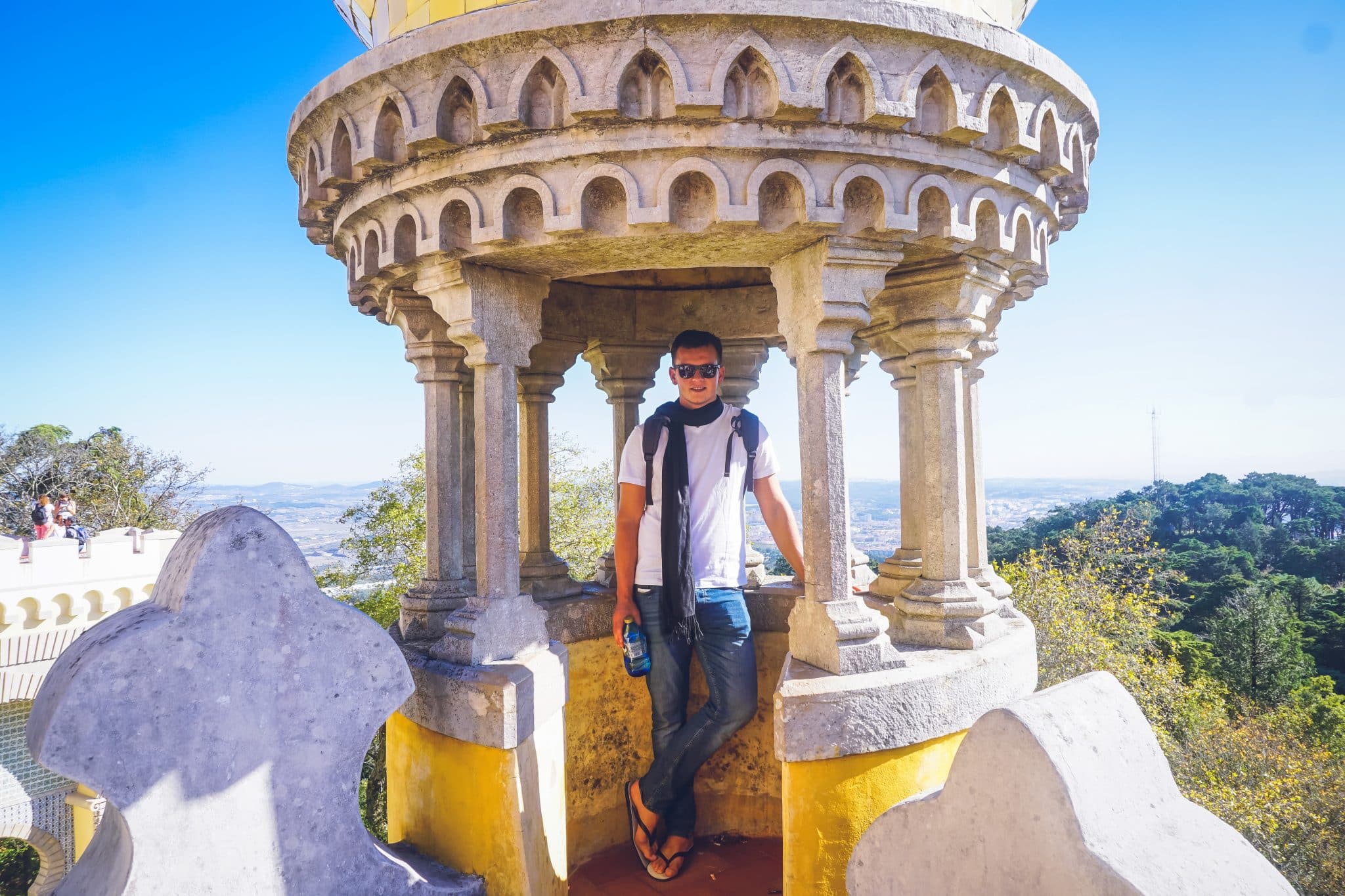 The entire Pena Palace is a large area, so you could actually spend the entire day exploring this place alone. We decided that we were only going to explore the exterior of the palace, so we only needed about an hour and a half (it takes 15 minutes each way to walk from the entrance to the Palace). 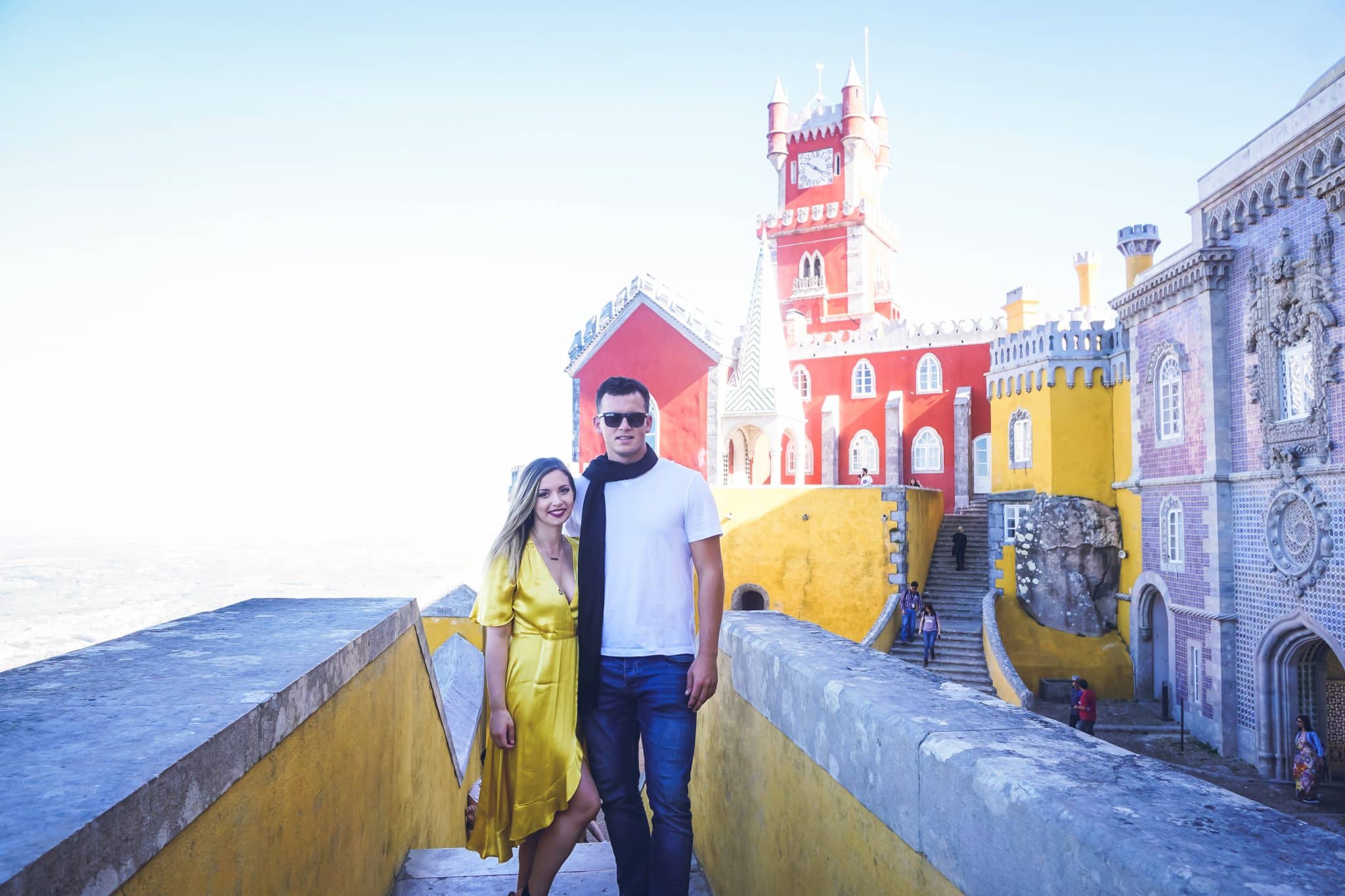 The only thing about this place is that it is always pretty crowded, even when we were there at 10 in the morning. Luckily, our driver was able to get us to the front of the line with his pass.

In retrospect, I think we would have paid a little bit more to go inside the palace too, because once I saw the outside I wanted to see it inside too. It was also way less crowded on the inside and had some of the best views from the top. Regardless, the Pena Palace was probably what made our experience feel like we were living our own fairytale.

READ MORE:   Where to Find the Best Beaches in Algarve, Portugal 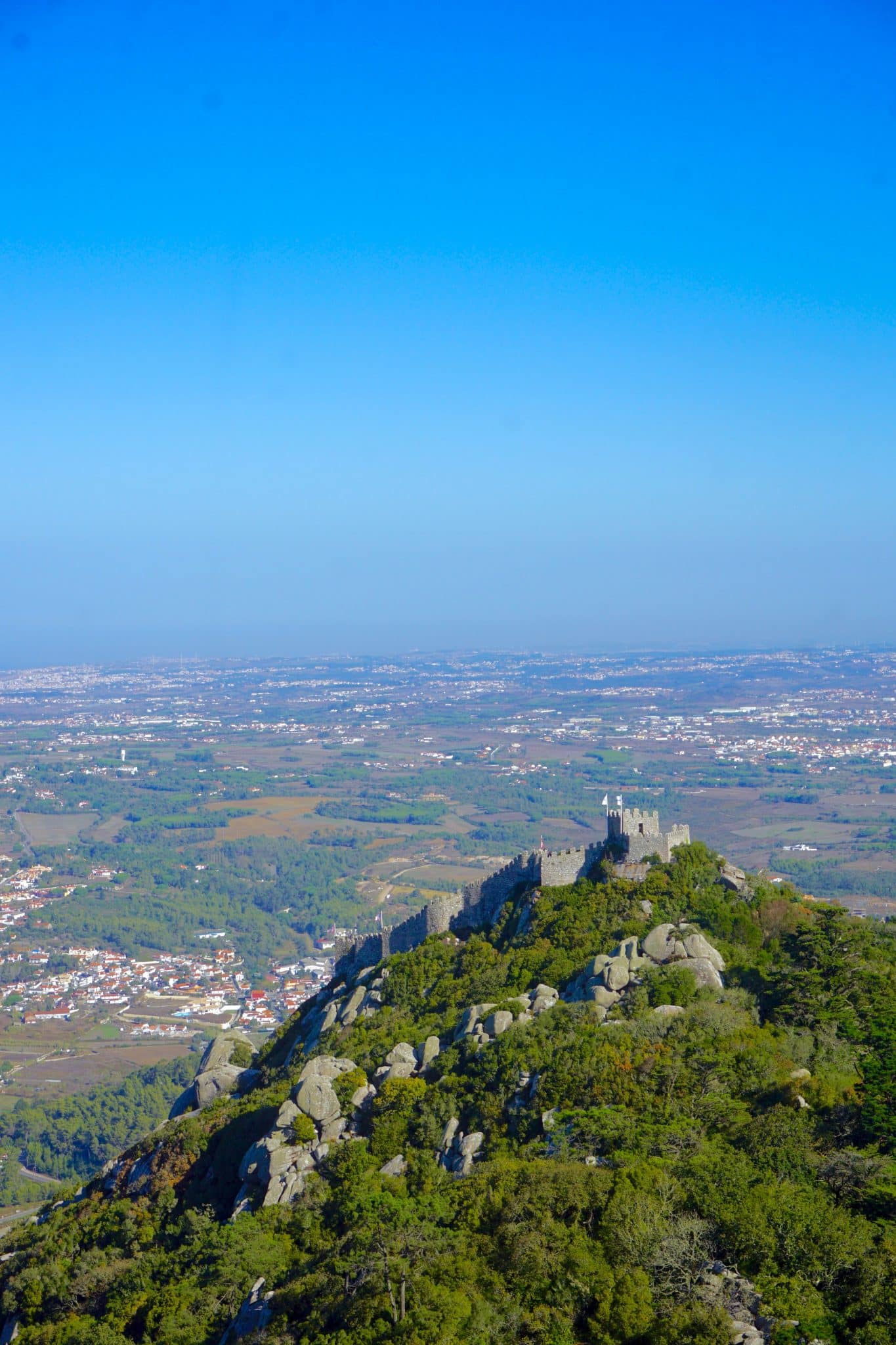 If you want a spectacular view over the entire Sintra region, the Moors castle is a must. During the 8th and 9th century, the Moors from Northern Africa invaded Sintra, as well as other parts of Portugal. Supposedly, the caste was strategically placed here to have a Vantage point over the Tagus River. What remains today are fortified stonewalls and castle ruins.

We didn’t have time to visit this place ourselves, but from the Pena Palace we had a great view of this spot. 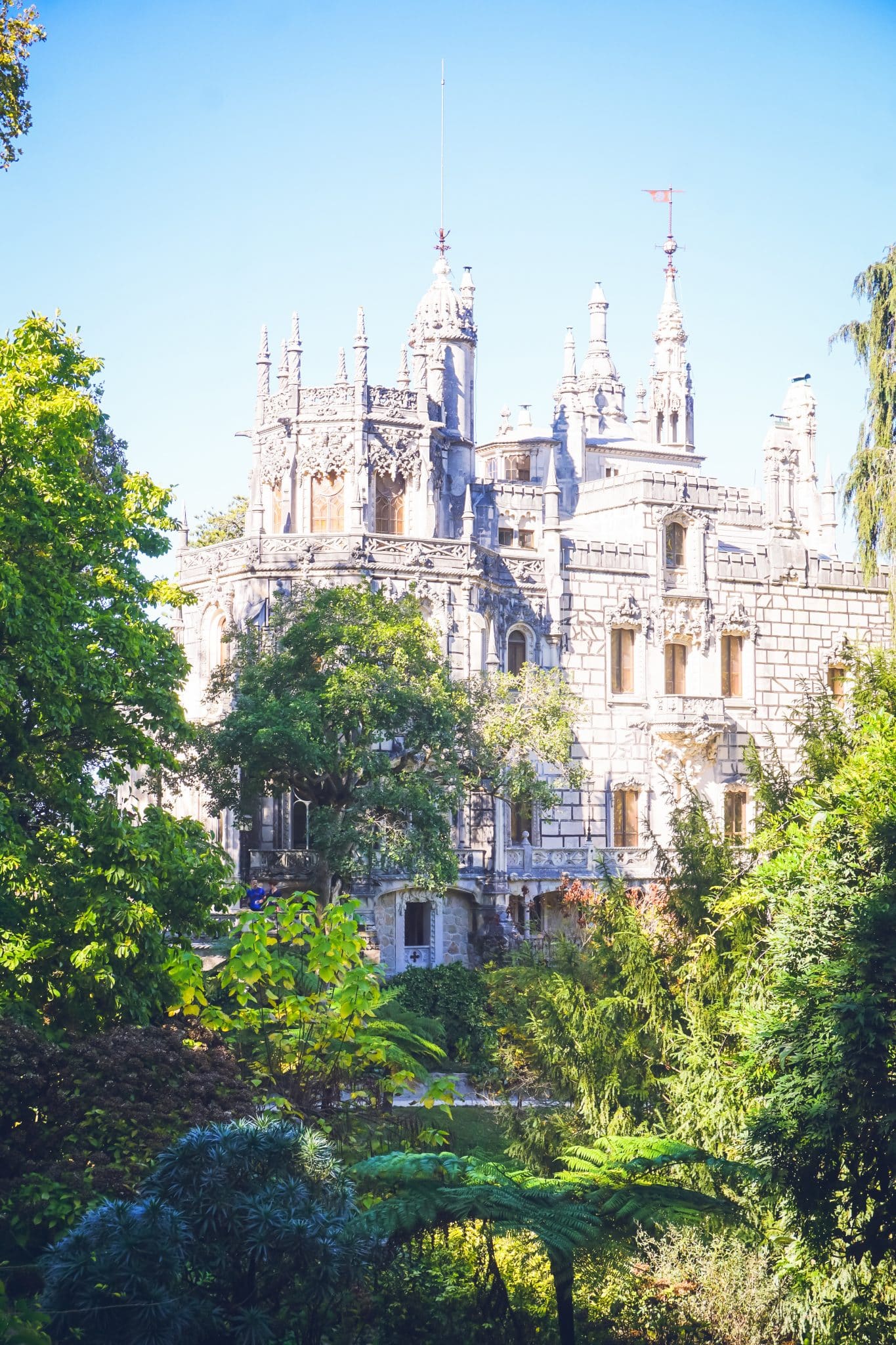 On the surface, it may look like this place is just another variation of botanic gardens. But underneath, this estate is filled with underground tunnels and mystical monuments.

Quinta da Regaleria is breathtaking combination of Moorish, Egyptian, and Gothic design. It’s also Sintra’s most mysterious monument. While it was built in the early 1900’s by a Portuguese tycoon, no one is exactly certain what took place here. 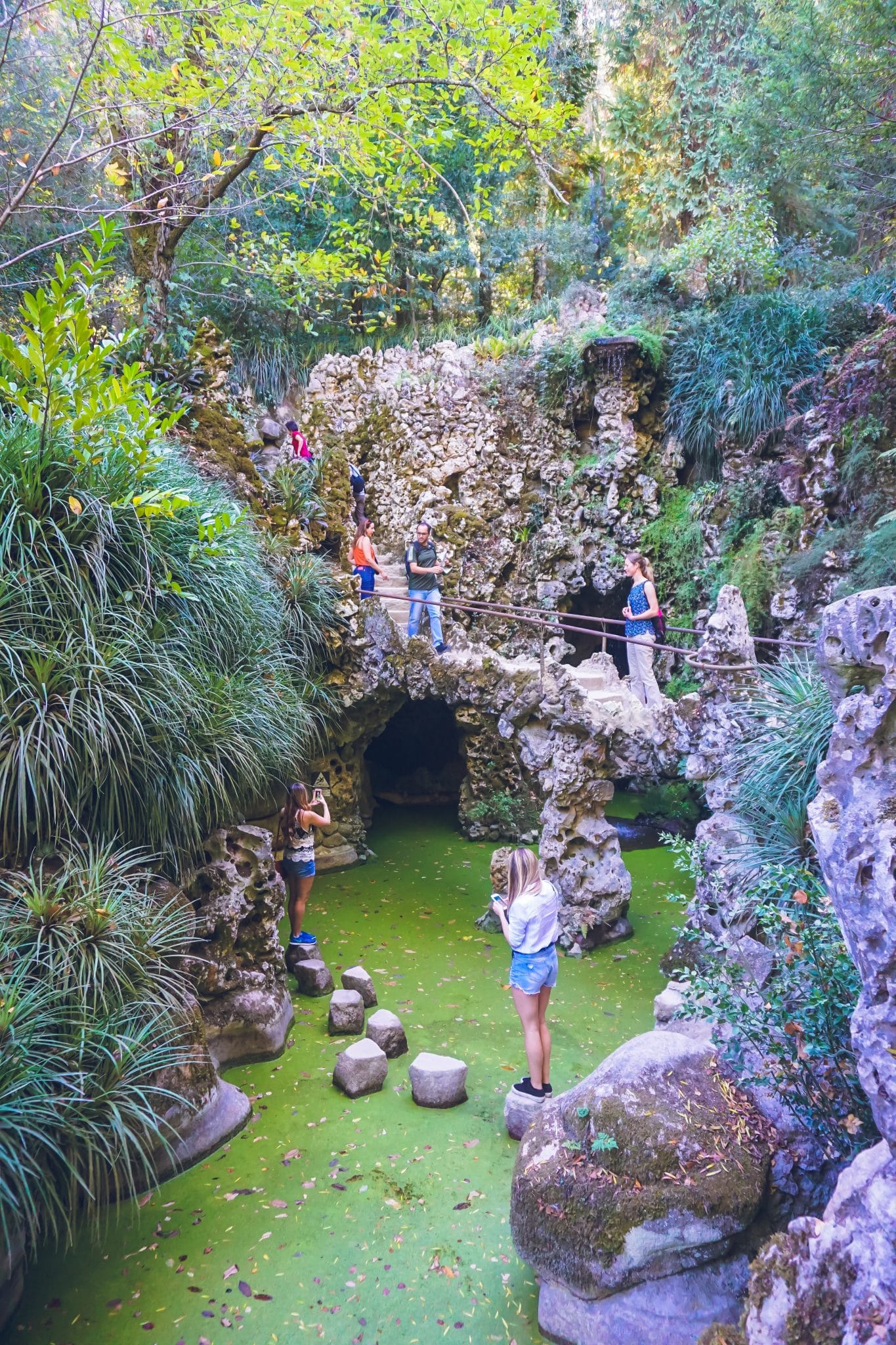 Our driver told us that many people believe that this area was used for Freemasonry, which is basically some elite secret society.

Whether or not it’s true, this place is still crawling with interesting symbolism. The “initiation well” is full of masonic and alchemical signs, as well as The Gods Promenade. Also, don’t miss this interesting symbol at the entrance to the chapel.

* Falls into black hole of conspiracy theories on the Internet * 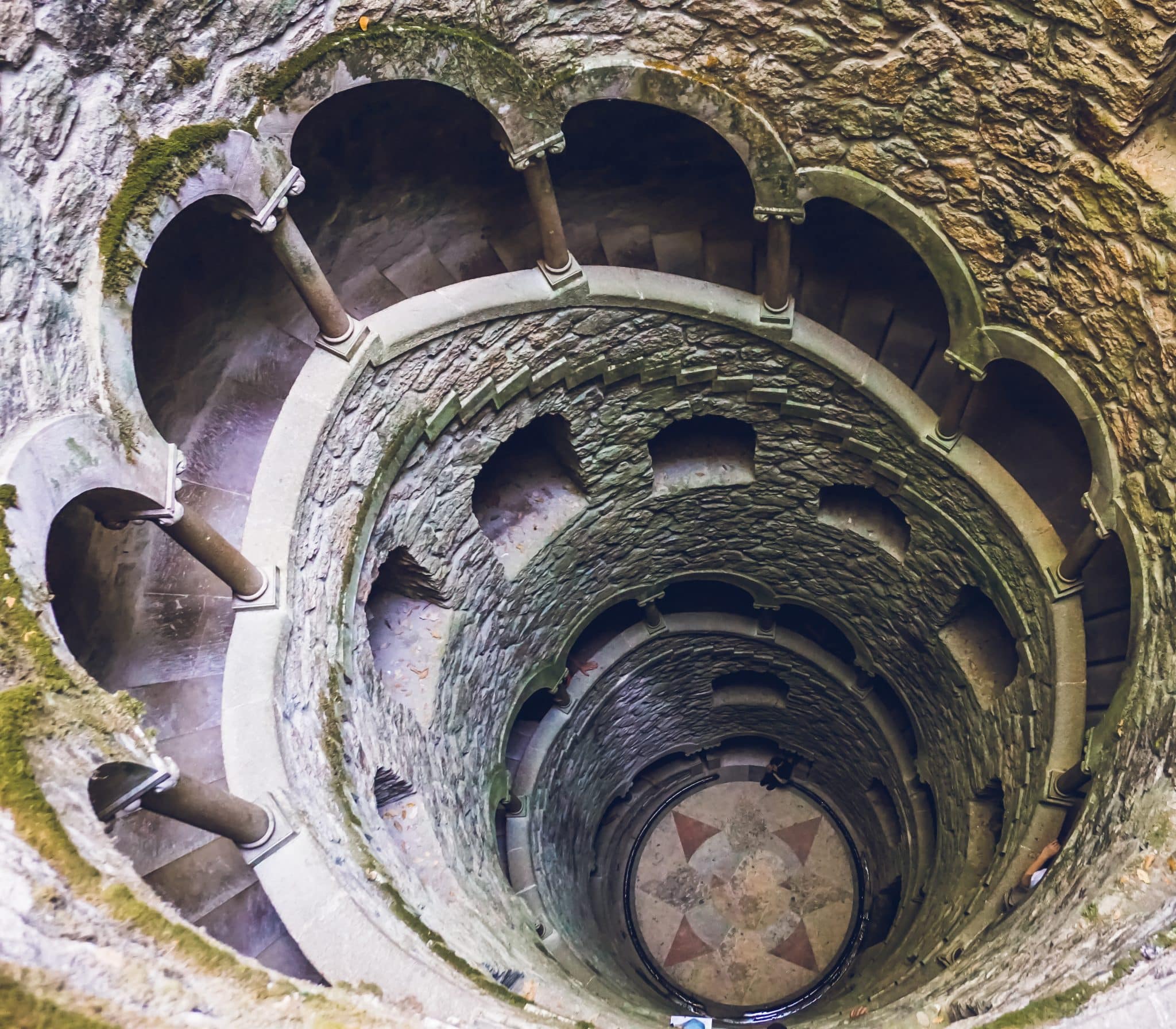 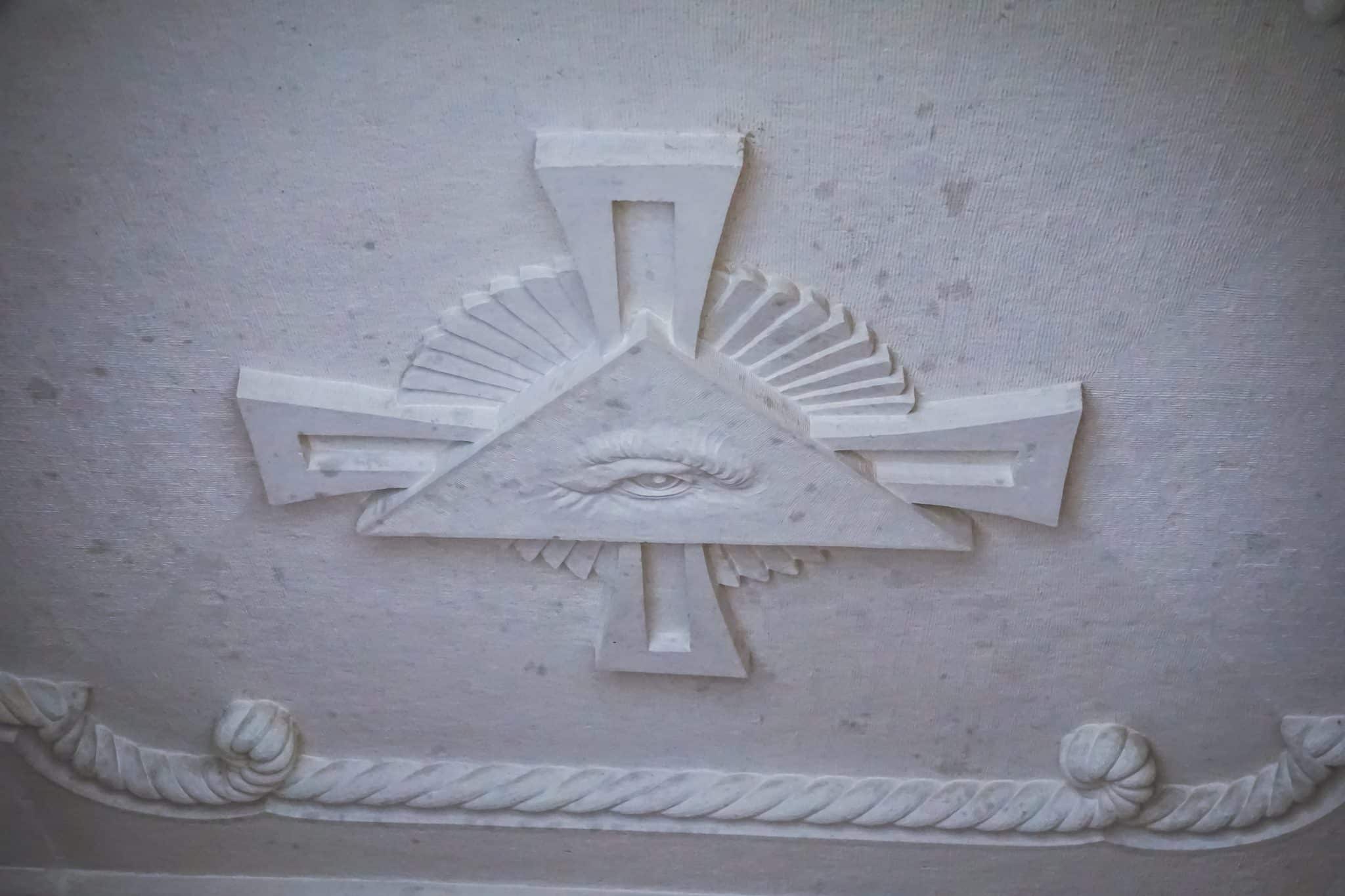 This place is actually a lot smaller than the Pena Palace property, so we spent about an hour exploring around here. My favorite part about this place is the lovely gardens and little ponds around the property, which was really romantic and peaceful. 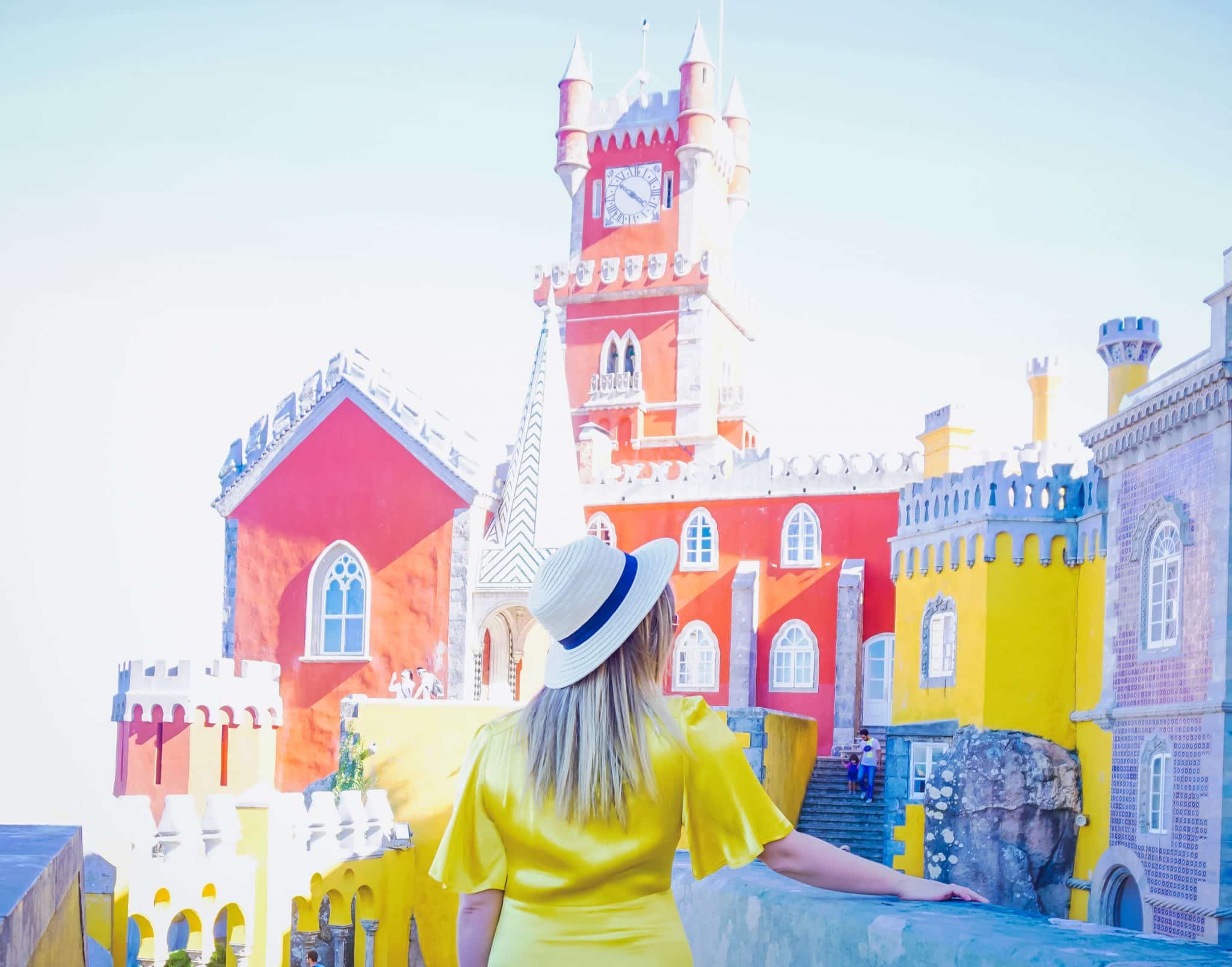 We were lucky to visit Sintra at the end of October, which I think is the perfect time to visit. Our driver told us that during the summer months, many of the places are completely packed and chaotic. The weather in October was still warm and we were still pretty hot in what we were wearing.

READ MORE:   Where to Find the Best Beaches in Algarve, Portugal

I would recommend visiting the Pena Palace earlier in the day like we did, as it started to get more crowded as we were leaving around noon. 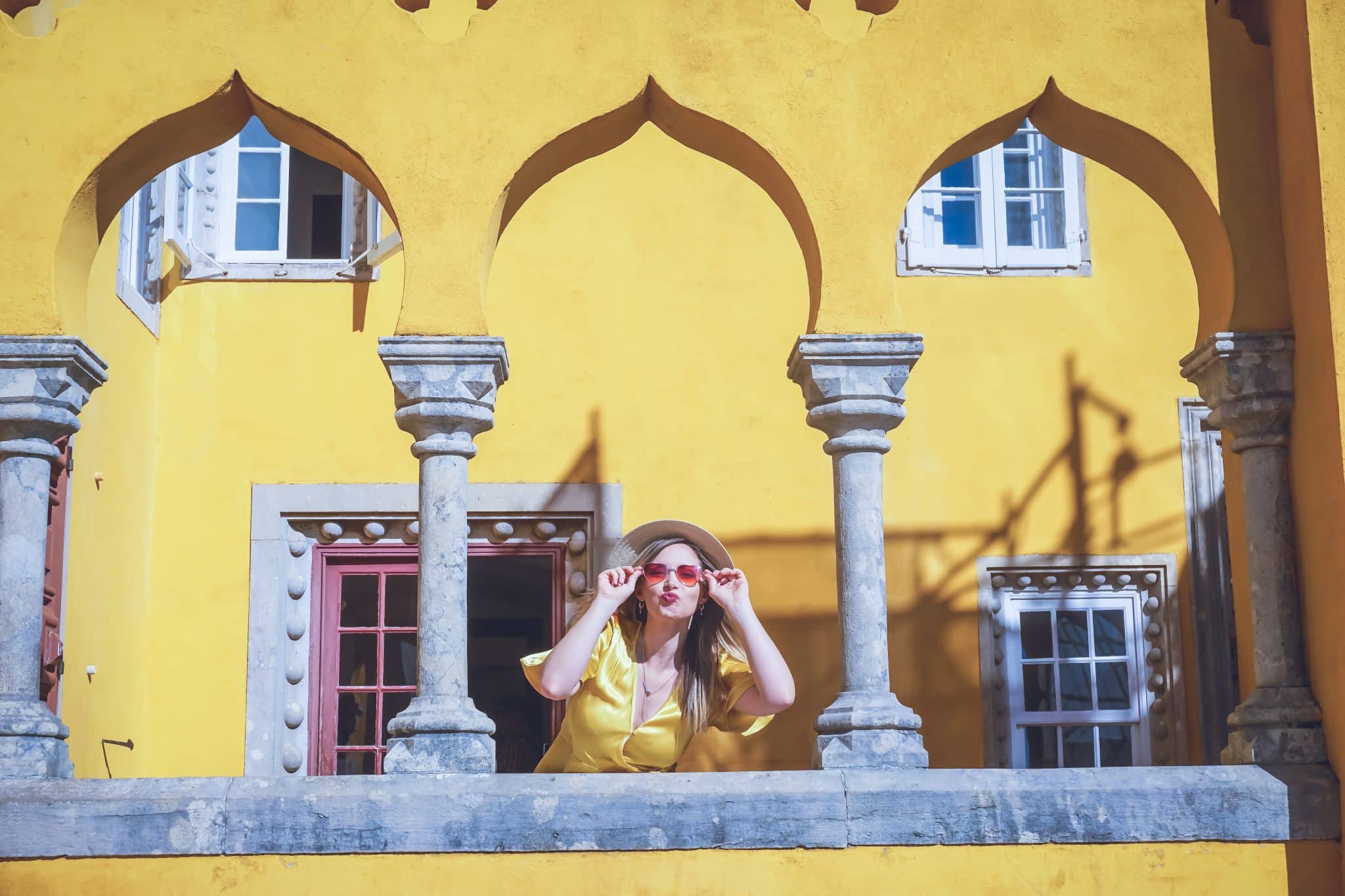 Also note that you will have to pay entrance fees to get into most of the castles. We paid 7.50 euros each to get into the Pena Palace, and then another 7 euros each for the Quinta da Regaleria.

The town of Sintra itself is worth visiting too. We drove through, but decided to eat outside of town at a place a bit less touristy. Joao took us to a local hotspot with traditional Portuguese cuisine. We had some incredible seafood and homemade cheese that gave us fuel for all that uphill walking in Sintra!

Why we loved Lisbon by Beetle 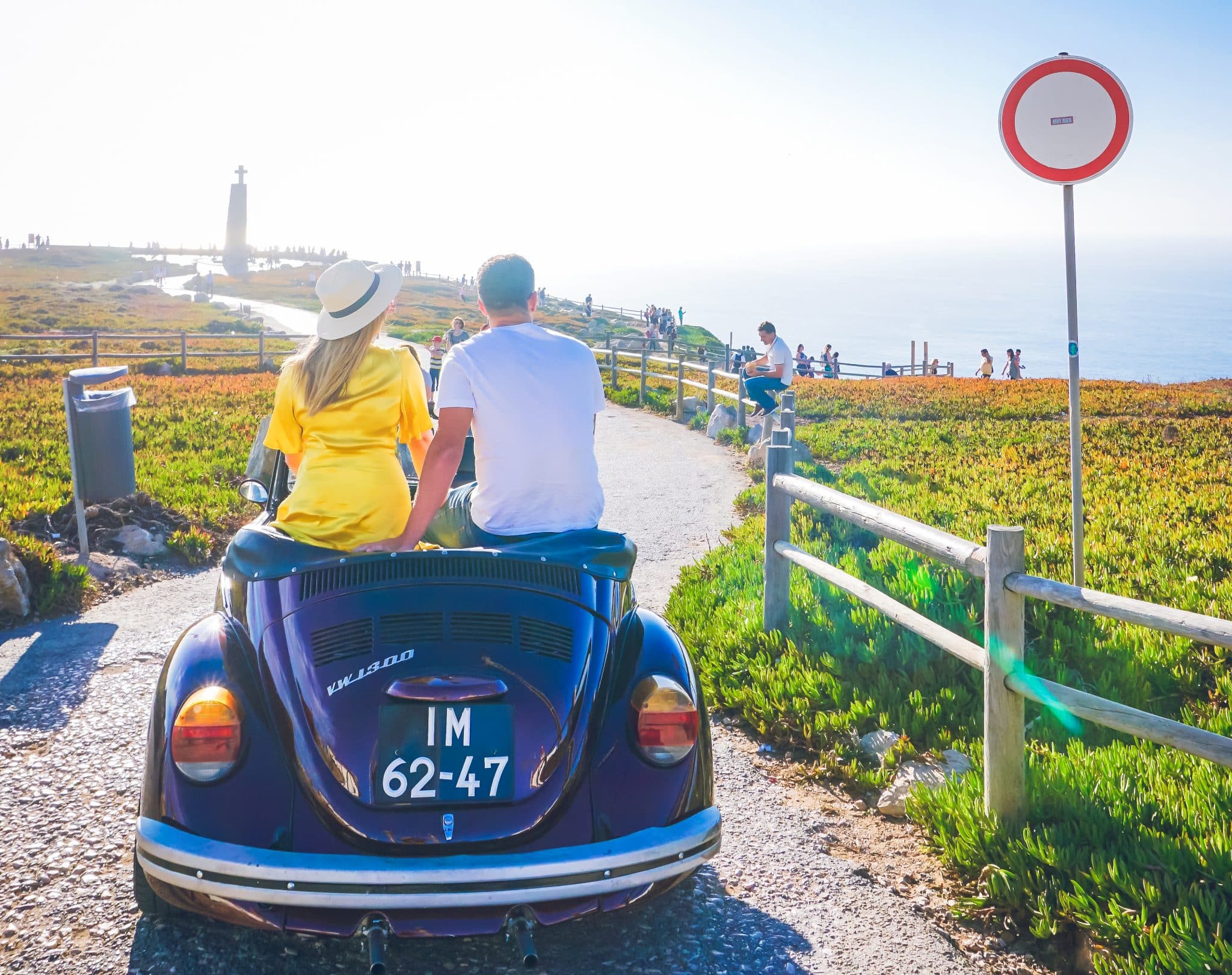 As Domeniko works in tourism himself and I’ve done a lot of traveling, we know a good thing when we see one. And believe me when I see that this tour was one of the best travel experiences we’ve ever had.

Not only did we get to see Sintra, our tour guide took us for a scenic detour at the end, showing us Cabo de Raco, which is the western most point in Europe, and the seaside town of Cascais. 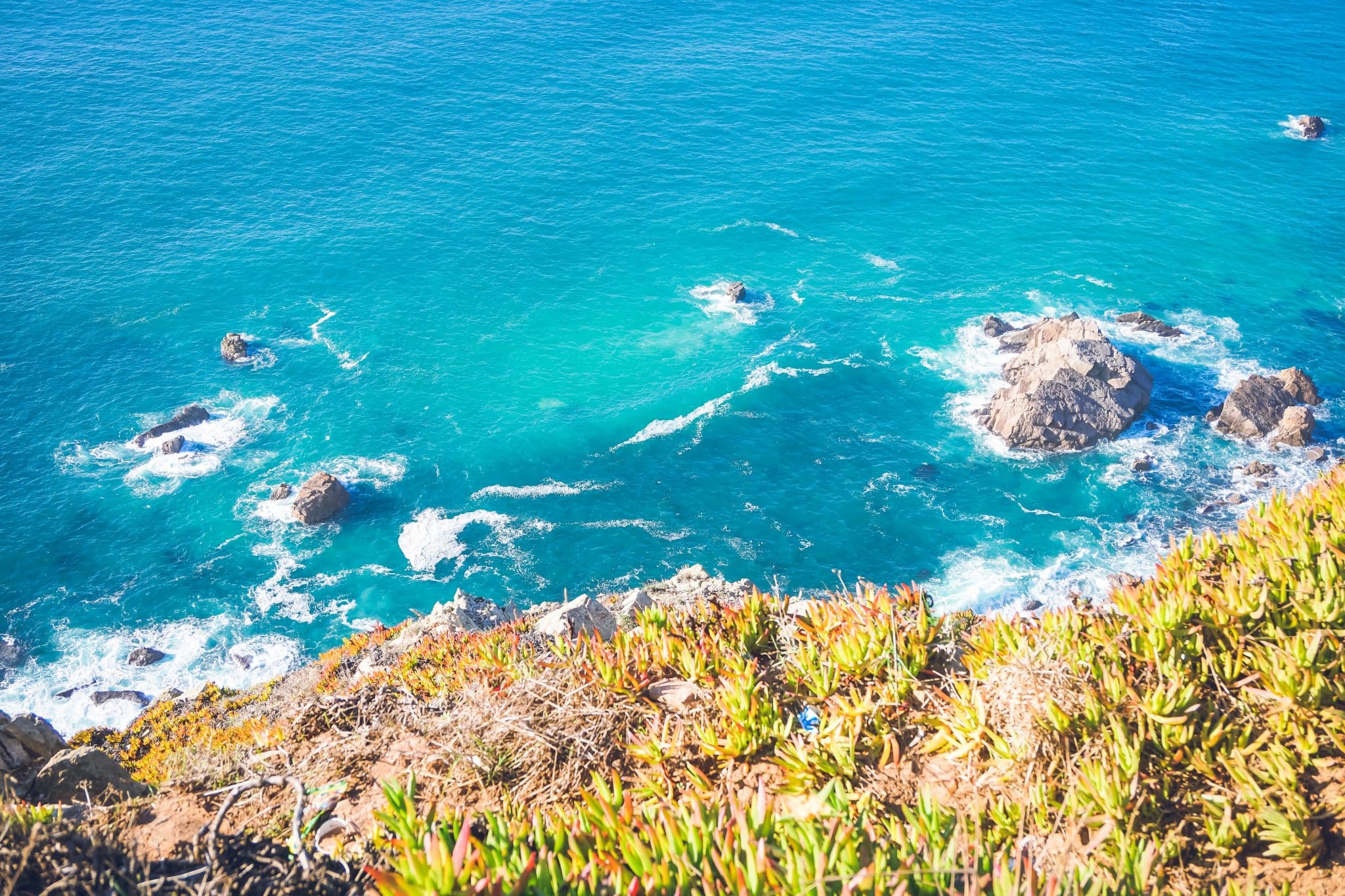 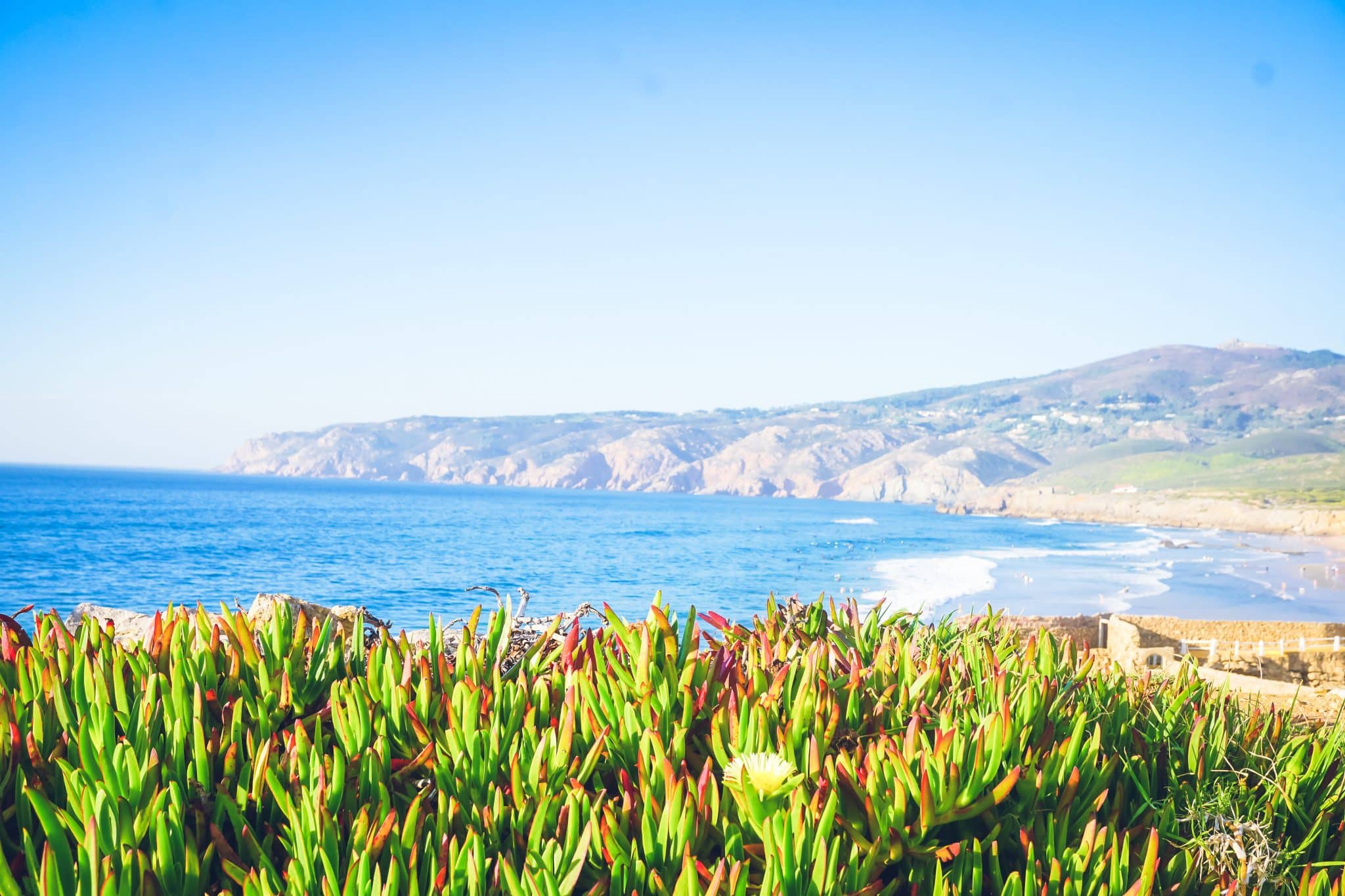 We drove along the coast back to Lisbon, and I felt like I was driving in Orange County, California with the wind blowing in my hair. Not to mention, Domeniko was beaming with excitement and a good buzz going from a lot of Porto wine.

What made our trip the most special was our driver Joao, who we now consider our friend. He had such a wealth of knowledge about Lisbon, Sintra, and everything Portugal. We liked him so much we invited him to visit us in Croatia!

If you find yourself in Lisbon, check out the other tours Boost Portugal offers, such as Eco Tuk Tours, Segways, Bikes, and more!

Thank you to Boost Portugal for hosting us on this trip. We were guest of the company, but as always, all opinions are genuine and my own.