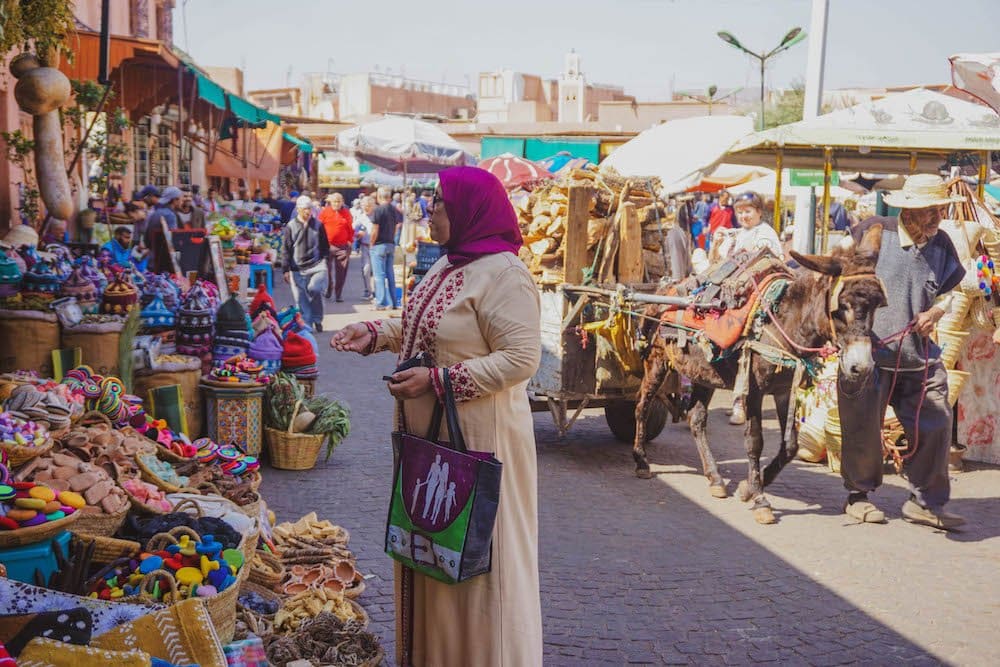 Home to more than 36 million people, Morocco is a complex, cultural mosaic.  Its rich heritage blends influences from Northern Africa, the Middle East, and Europe unlike anywhere else in the world. It’s no surprise that the Moroccan people are incredibly diverse and represent varying identities.

That being said, there is a lot to unpack when it comes to the multi-dimensional Moroccan culture. There are many misconceptions about Morocco, making it the most misunderstood country I’ve ever visited. It’s important to step out of an ethnocentric lens to both understand and appreciate cultural differences.

If you’re considering visiting Morocco, I encourage you to read through this guide and see it someday for yourself. Experiencing the Moroccan people, hospitality, and culture is a once in a lifetime experience.

There are two ethnicities that make up the Moroccan people: Amazigh and Arab. The Amazigh people have been indigenous to Morocco for more than 5,000 years. Ruffians, cheleuhs, high Atlas, and Soussi are the different tribes within the Amazigh.

You’ve probably heard of “Berber” before to describe the indigenous Amazigh people. However, this is politically and historically incorrect. French colonizers in Morocco named the indigenous communities “berber”, which means Barbarian in French. You will see this word used in marketing material throughout Morocco, but it is more respectful to refer to these indigenous groups as Amazigh.

The second group of people in Morocco are Arabs. The history of Arabs in Morocco dates back to the 8th century. They had a significant influence on the architecture, religion, and culture. There are also Arab tribes, who live nomadically in the Sahara desert. Some spend their entire lives living nomadically, while others (like our tour guides) only live nomadically for their childhood.

There are also many foreigners living in Morocco, especially in Marrakesh and along the coast. You’ll find many French and Spanish who made Morocco home , even Chinese and American as well. This contributes to a blend of traditional Moroccan and Western influences.

The official languages of Morocco is both Arabic and the Amazigh indigenous language. Most Moroccans speak Arabic in the bigger cities, while the various Amazigh tribes speak different dialects in the smaller villages. Many Moroccans also speak French, and a handful will also speak Spanish or Turkish.

While many Moroccans do speak some English, you should not expect this as a standard. Learn “marhabaan” for hello and “shukran” for thank you when greeting shop owners and vendors at the very least.

Morocco is a Muslim country, and religion is deeply rooted within their unique culture. For example, you will hear the “call to prayer” from  Mosques five times a day. During this time, you may see others silently bowing their head in prayer at this time. It is best to avoid walking in front of others when they do this.

You can expect it to be harder to find alcohol at many restaurants, though most hotels, grocery stores, and night clubs will serve some. You also won’t find pork at most restaurants, as Muslims do not eat pork.

During the month of Ramadan in spring, Muslims fast during the day time in order to cleanse the body and spirit. Not everyone in Morocco practices Ramadan, but out of respect most restaurants close during the day during this time. Keep in mind it is considered disrespectful to eat in front of others while they are fasting.

Technically most practicing Muslims in Morocco are Sunni. However, many people in Morocco practice Islam in more of a culture sense than in the strict religious sense. According to our tour guides, younger generations are not are religious.

Morocco is a mix between modern and traditional values. But you can’t come to Morocco with the same mindset and approach as you would to visiting somewhere in Europe, because it’s totally different.

First off, Morocco is very much a relationship-based society. Not only do people value close friendships and family, relationships are central to doing business. It’s often easier to navigate the city when you know someone, as it is in many countries.

During our tour with Traverse Journeys, our local tour guides helped us cultivate so many impactful relationships that I wouldn’t have been able to build on my own. It definitely does make a difference to at least take a tour with a certified guide in each city you visit!

Bargaining is also part of how Moroccan people do business and the relationship-based culture. When you visit the Medinas (old city), bargaining is a standard at most of these places. It’s also standard that tour guides usually get a commission if tourists buy anything from certain shops.

It’s also seen as somewhat offensive to take photos of people without consent or some type of relationship. It’s best to avoid taking pictures of people’s faces unless you buy something from them, or somehow develop a relationship with them.  Otherwise, try taking a photo from behind where you can’t see their face.

Our tour guides in Morocco wearing tradition attire of the Sahara tribes and being goofy.

Modesty is a central part to the Moroccan culture. I found that this applies to both women AND men. First of all, it’s often extremely hot with a strong sun in Morocco. So that’s why you see men also wearing looser clothes, and even a head wrap, especially in the Sahara desert.

Women do NOT need to wear a hajib (head scarf) in public. You’ll notice some local women do. Many don’t. It’s their choice, and yours too! The only time you do have to wear a scarf is when you go into most mosques (though many aren’t open to tourists anyways!)

You’ll also find that women in Marrakesh and the bigger cities dress more modern while women in the smaller villages in remote areas will dress more conservative. This is something to keep in mind when deciding what to wear.

While the gender dynamic may be different from the West, it’s wrong to assume women are second-class citizens. Women in Morocco are highly educated and valued as a whole. Morocco is also considered a progressive, Muslim country.

From my observations, women are often seen as sacred and needing protection. I noticed this when hotel staff would always offer to escort me where I was going, to make sure I wouldn’t get lost. Another time at a group dinner I left early to explore the area. I noticed the owner stepped out into the street just to keep an eye on me, even though it was completely safe.

I personally didn’t have any issues navigating Morocco as a woman, but it did help that I was traveling with a group.

This is perhaps where the most misconceptions about Morocco lay. Yes, you do have to be vigilant in Morocco about a couple things, but these issues aren’t exclusive to Morocco.

For women, you do need to be careful not to be overly friendly. Some men have mis-guided views of foreign, especially Western, women. Men may try to cat-call you or even reach for your arm.

While it is unfortunate these situations exists, I found it’s mostly more annoying than it is dangerous. In general, it’s just very important that you stay in reputable accommodation and travel with certified guides.

If you’re a seasoned solo female traveler, it is possible for solo travel in Morocco to be safe. But if you’d rather be able to relax a bit more, it does make a difference to go with a group tour and book in advance.

Pick pocketing is an issue in Morocco, just as in many places in Europe. You have to be particularly careful when you’re walking through the Medina and crowded souks. Try to keep your purse closed and in front of you and avoid setting it down to look at something else.

Phone swiping is also an issue to be vigilant about. It’s easy for someone to snatch your phone out of back pocket or even your hand. It’s okay to use your phone or camera to take pictures, but then put it back in your bag.

I didn’t encounter most of these as we were with a tour group, so if you decide to DIY your trip to Morocco you need to be vigilant.

You may encounter someone:

You’ll encounter most of these in the Medinas of Morocco. It’s best to take a tour of Medinas with a certified guide. If you need directions, ask a family or shop-keeper. Read up on other scams in Morocco here.

You may never run into any of these issues, but it’s important to manage expectations and have an understanding of this. Tourism is one of the main sources of income for people in Morocco. Some people just want to make a quick dollar, while most want to foster lasting relationships.

You really haven’t seen hospitality until you’ve visited Morocco. Hospitality is rooted in the cultural identity of the Moroccan people, who want to make you feel at home during your stay.

During my two weeks in Morocco I saw this on more than one occasion. First off, I ended up getting stuck in Morocco during the peak of Covid-19 in early March (2020). While the country shut its international borders and began to gradually go into lockdown, the Moroccan people were not only hospitable, they quite literally saved our lives.

You can tell a lot about a country by how they act during a crisis. In this case, the hospitality of Moroccan people felt so genuine, that even in a time when the rest of the world was panicking, they were STILL going above and beyond to make us feel at home.

While Morocco might not be opening up to many tourists any time soon, the hospitality of the Moroccan people are worth a visit in itself. I hope you decide to visit someday and experience the culture for yourself!

Pin it for a later:

Disclaimer: I was a guest of Traverse Journeys on this Morocco retreat. All opinions about Morocco are entirely my own.