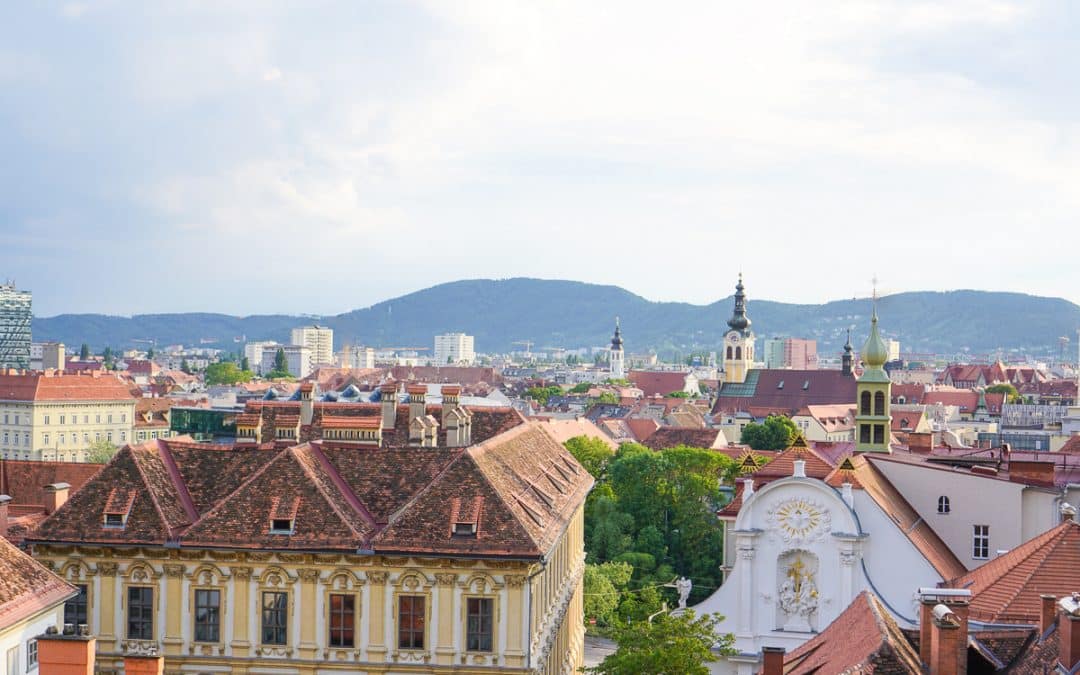 Sustainability is one of those words you keep hearing but many actually have no idea what it means. It’s usually not the first thought that comes to mind in the tourism industry for travelers and brands. This is why it is even more important to highlight the leaders that are doing it right.

Look no further than Graz, Austria as an example of sustainable tourism. You maybe never heard of this mid-size city, yet Graz is full of funky and unique travel experiences. Most of all, this destination makes sustainable tourism easy for travelers, a concept that should inspire other European cities to follow suit.

*Disclaimer: This post was sponsored by Graz Tourism and Austrian National Tourism. Although they were kind enough to help me see the city, all thoughts and experiences are entirely my own.

A 3-course farm-to-table meal with fresh produce and ingredients from the Styrian region.

If you’re like me, you probably had no idea that Graz, or even Austria in general, is considered a foodie destination. I wrongly thought that Graz would be mostly sausage and beer, but I was pleasantly surprised to find that Graz is the culinary capital of Austria.

The secret to the award-winning cuisine is in the ingredients. In Graz, local products isn’t just a hipster restaurant concept, it’s a culinary standard. Mostly all of the restaurants in Graz are farm-to-table, as they buy from the surrounding Styrian farmlands.

You can truly taste the difference in the dishes. Some of my favorite local dishes were asparagus risotto, chicken breast in wine sauce, and the local cheeses.

If you don’t believe me when I say that nearly all the restaurants are farm to table, head to one of Graz’s 14 farmers markets and ask them directly! The city is known for bringing in tourists that come specifically for the farmers markets. There are two daily farmers markets, and the others run mostly on the weekends.

Local produce and ingredients are important for sustainable tourism for a few reasons. The first is that buying food as local as possible reduces your food miles (more about this concept in this BBC article). Many destinations import most of their food, causing more carbon emissions and a reliance on outside sources. Local foods not only support communities, they also help you reduce your own carbon footprint when traveling to a destination.

Whenever I travel, I love to find concept shops that carry local designers and products. It can be difficult to find shops that are ethical and sustainable, and I usually have to do a lot of research beforehand.

In Graz, most of the shops are already fair-trade or ethically certified, so you can rest assured that your tourism dollars are going to the right place.

Here are a few of my favorite shops I discovered:

While staying in the Lend District of Graz, our tour guide brought us into this second-hand shop. The store offers a selection of vintage items and upcycled bags and accessories. Offline Retail is a non-profit that profits employment for those recovering from addiction.

I stumbled upon this store when a pair of Veja shoes caught my eye. Turns out Magazzin is full of fairtrade apparel and accessories brands from across Europe. You can find anything from sustainable sneakers to fairtrade t-shirts and dresses. They also offer a selection of plastic-free alternatives, such as lunch boxes, cutlery, waterbottles and mugs.

Speaking of reducing plastic, head over to Graz’s zero waste store to grab some eco-friendly alternatives. You’ll find bamboo toothbrushes, beeswax wrap for food, shampoo bars, as well as a selection of foods and baked goods. The store encourages buyers to come with their own bags and buy some of the food items in bulk.

Though I didn’t need any food items, I purchased a bamboo toothbrush and shampoo bar that surprisingly did wonders for my hair. I can’t wait to travel more with the both of them!

I’m super bummed I ran out of time and didn’t get a chance to explore here, but I guess I’ll have to come back! This sho is entirely fairtrade, and carries a variety of houseware items, clothing, and jewelry. Chic Ethic is the largest fair trade shop in Graz, and would definitely help inspire some to travel more sustainably.

READ MORE:   My Secrets to Sustainable Travel on a Budget

While strolling through the city center I felt oddly peaceful, and I couldn’t quite figure out why. Then I realized that I was surrounded by friendly locals and bikers, without a single car in sight. That’s because in Graz’s city center is entirely car free. Not only does this make the city extremely walkable, it helps reduce the city’s carbon emissions and decrease the urban heat island effect (basically more carbon being trapped inside the city and making it even hotter).

If you don’t want to walk, the Graz city center and surrounding area is one of the best regions for cycling in Europe. I’d go so far to say that it is one of the most bike-friendly cities I’ve ever visited. You can use the city’s bike sharing system to get around the city. For those that want the convenience of getting a bike close to accommodation, it is common that most hotels offer bike rentals.

Graz also provides free transportation on the tram system. You can take unlimited rides from one side of the center to the other, during rain or shine. The tram also connects to the outskirts of the city, which makes this an easy alternative to driving everywhere.

Most people associate sustainability solely with the environment, but that’s only part of it. Having a degree in sustainability, I can tell you that for any company to be sustainable it has to incorporate the three P’s: people, planet, profit. This is what is known as the triple bottom line, a commitment to social, economic, and environmental causes.

After talking specifically with the Graz Tourism Board about this, it’s clear that this city doesn’t just talk the talk. They walk the walk

Photos taken while exploring the Lend District of Graz.

Tourism in Graz is deeply committed to the community. Their approach is to foster connections between the community and tourists as much as possible. One way they’ve done this is by dispersing travelers beyond the city center into otherwise residential areas of town.

During my time in Graz, we stayed in the Lend district about a 15-minute walk outside of the City Center at the Lend Hotel. The area of Lend is actually a former red-light district, now home to a large international population. As it just so happens, the area is actually home to many Croatian and Bosians. I never would have learned this about the community if it wouldn’t have been for staying in this area of town.

Other than all of the aforementioned initiatives in the city, Graz is filled with lush green spaces around every corner. The parks seem to be the epicenter of meeting points for the large population of young people in the city.

What was most pleasing was to see how well-kept the city was from any garbage or plastic laying around. Not only was there recycling containers throughout the city, I noticed that there was minimal plastic at any of the meals we had.

Graz may be one of the last cities in Europe where it is not overrun by tourists. In fact, they actually NEED more tourists. They want to use tourism as a form of economic development to stimulate the local economy, create jobs, and put that money towards improving the city for residents and travelers alike.

At the same time, it is very clear that Graz understands that there is a limit to tourism growth. To them, preserving the city’s authenticity comes first before profit, definitely something some other cities could learn from!

If you’re a seasoned, sustainable traveler, I can assure you that you will fall in love with Graz. But even if you find the world of responsible travel overwhelming, I still urge you to visit Graz. The destination makes it easy to practice sustainable travel. And you’ll become a better traveler because of it.