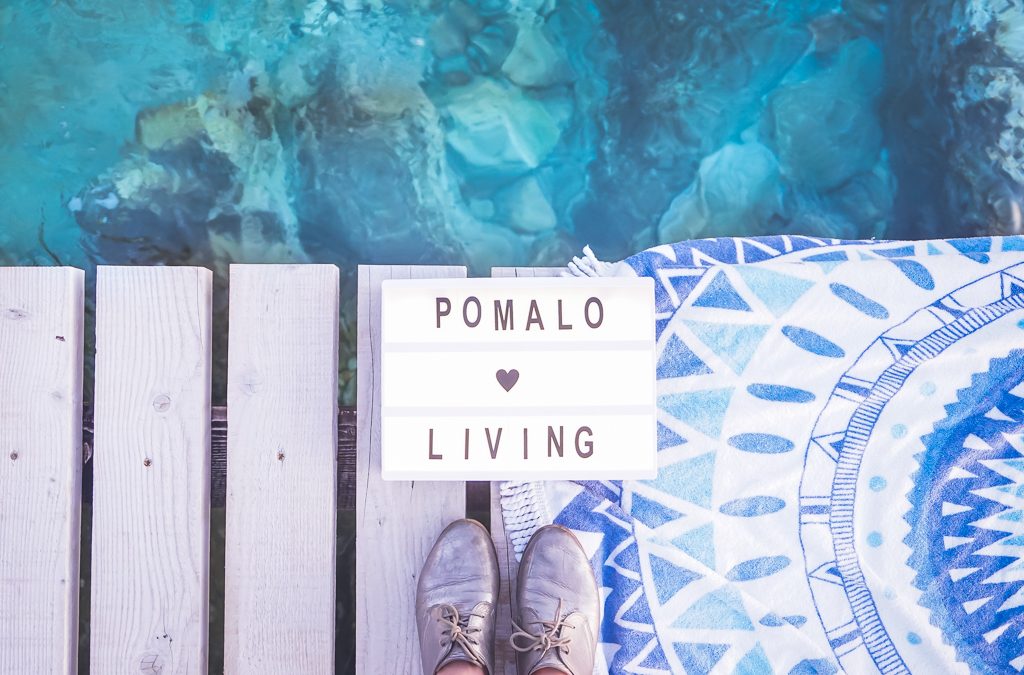 Whenever I’m asked about why I chose Dubrovnik, I end up narrating the same sensational monologue from start to finish. I could never find the right words to describe the carefree, yet often chaotic, way of life that keeps me coming back.

It dawned upon me when returning to Dubrovnik this winter. It’s the locals sipping coffee together for hours on end in a haze of cigarette smoke. It’s listening to klapa music while drinking homemade wine and eating fish with your hands. It’s the way locals only use their car horn to do a friendly “beep beep” when passing one another on the treacherous winding roads. The word for this doesn’t exist in English.

It’s a lifestyle with a strong contrast to the comfort of American convenience and consumerism that I come from. It’s a life without Amazon prime, McDonalds drive thru, Starbucks coolers, or target runs. 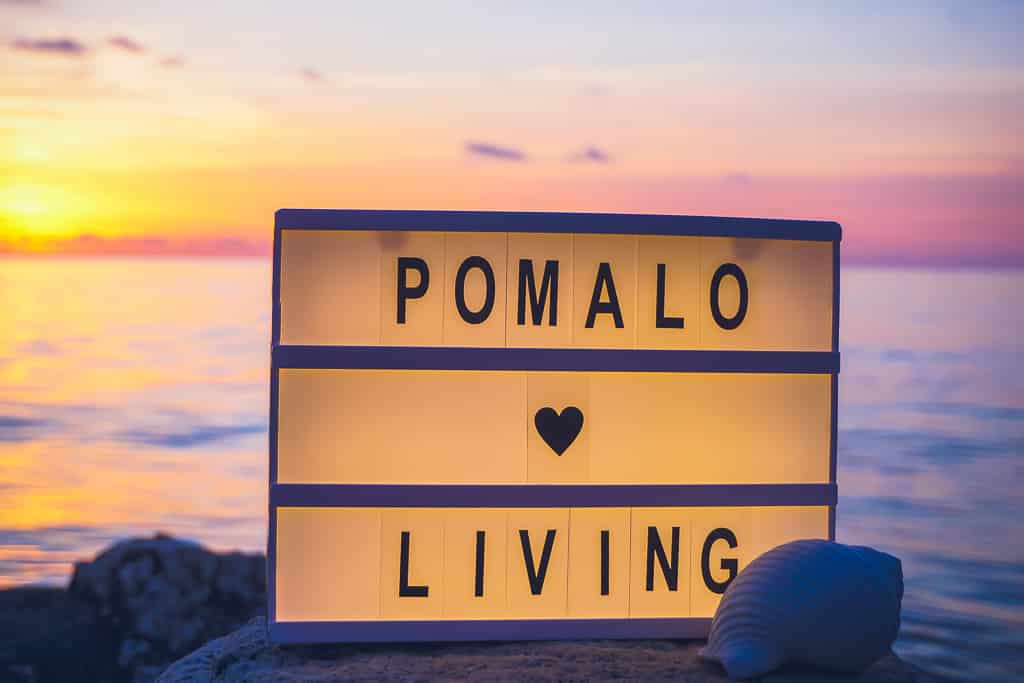 The word “pomalo” is one of the most quintessential words in Dalmatian vocabulary. Translated from Croatian, the word literally means slow, or slowly. However, the word is also used as a way of saying “take it easy”. It’s used as both an adjective and a verb in virtually any situation.

Used in a sentence:

“So, Alex, how’s the Croatian going?”

“So listen it was nice to see you, but I gotta run and go pick up the kids!”

“We need to finish this bottle of rakija before we leave tonight!”

Yes, along with dje si (what’s up), kenova (what’s up), and ce-ce-ce-cekaj (wait, said several times in a row for dramatic effect), pomalo is one of those words that Dubrovnik has made its own. I like to throw all of these phrases in while speaking Croatian in my exaggerated Dubrovnik accent (which sounds a bit Italian to me).

But out of all the words and Croatian phrases I can piece together, nothing seems to resonate with locals more than pomalo. I always receive an endearing smile that says I get “it”– it being the pomalo mindset. 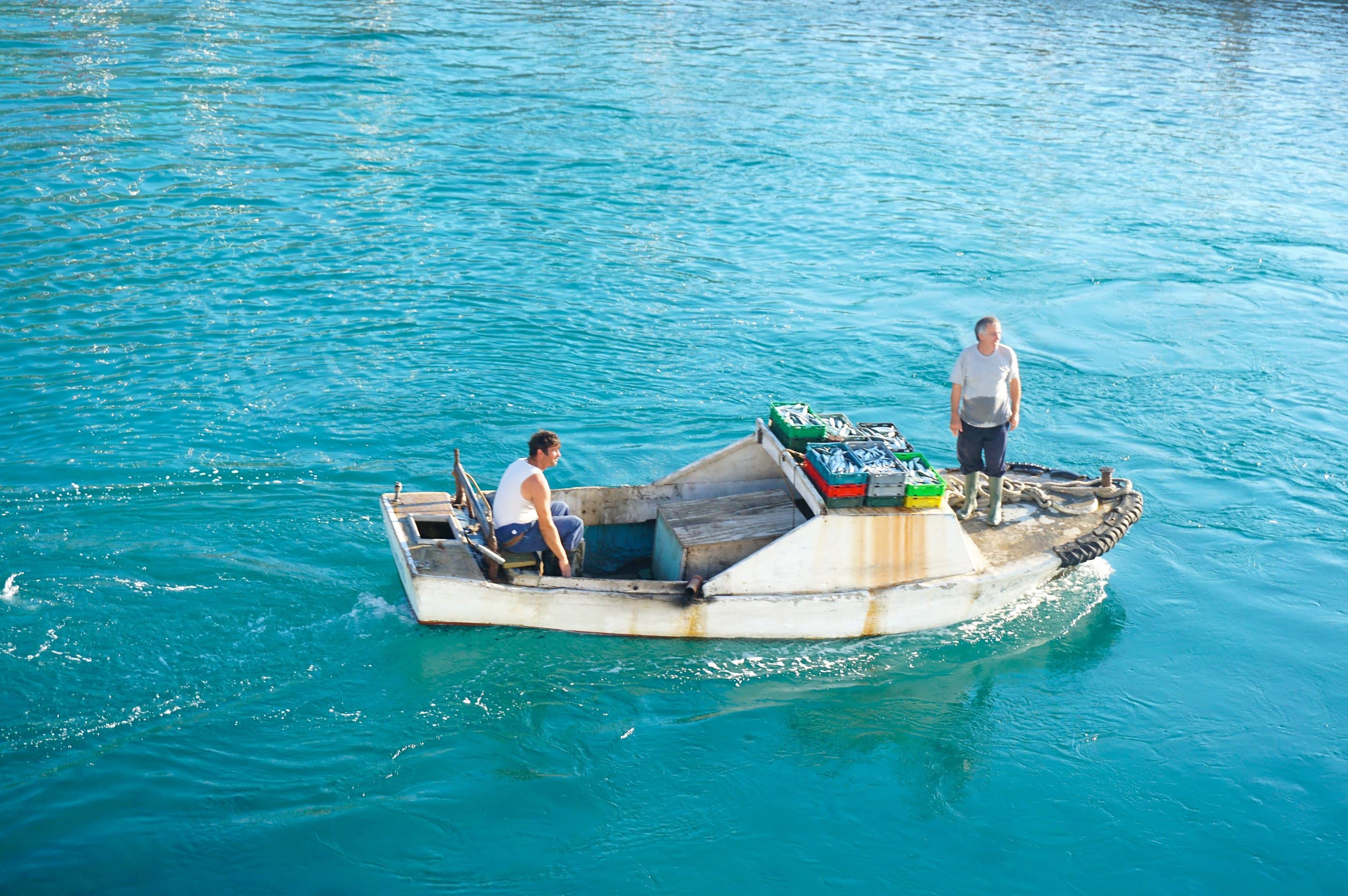 The “take it easy” mentality might not be all that surprising for a seaside town in the Mediterranean. It’s not to say that people are never stressed or don’t have struggles. It’s rather that in spite of all this, people prioritize enjoying their life at a leisurely pace.

On the other hand, the pomalo mindset is also deeply influenced by Dubrovnik’s culture customs. Croatians living elsewhere have asked me how I like “living in such a traditional place”. It’s no secret that modern-day Dubrovnik may still look and act like the Old World republic.

There’s not an American fast food or coffee franchise in sight. There’s one pizza delivery service that I know of. You wont find ready-made meals in the grocery store. I bought my boyfriend’s mom a blender, and I think she’s still using her handheld wooden machine instead.

And people aren’t doing these things to be hipsters or make a statement to corporate America. People value doing things the traditional way, even if it takes more time or may be perceived as old-fashion. 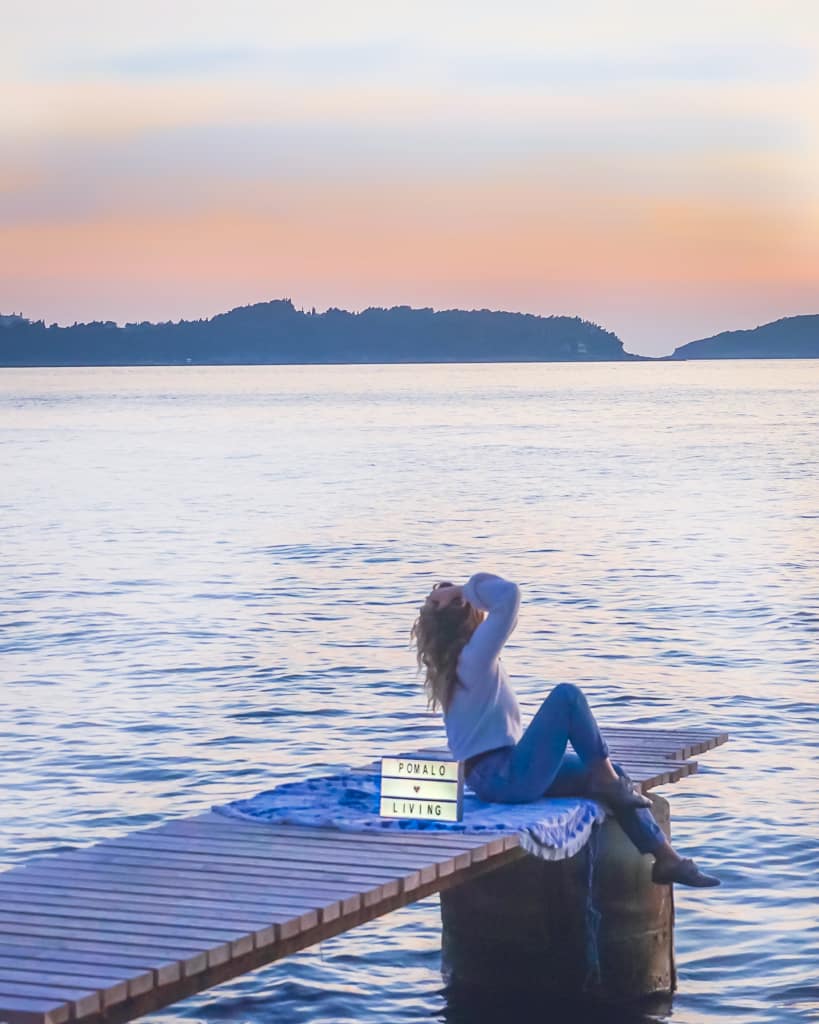 Meanwhile, I’ve found myself tangled in the middle of these culture customs and my own. While working remotely and writing for my blog, I’m virtually sucked into a mindset of “living to work”. The pomalo mindset flickers on and off in my head like a light switch. On the days that it’s off, I am overwhelmed with a feeling of “I’m not working hard enough”. I’d be lying if I said that I am completely acclimated to balance the two.

However, at the end of the day, the pomalo mindset challenges me to slow down a bit for once in my life. Most of all, it creates the headspace for me to focus on what I really love. 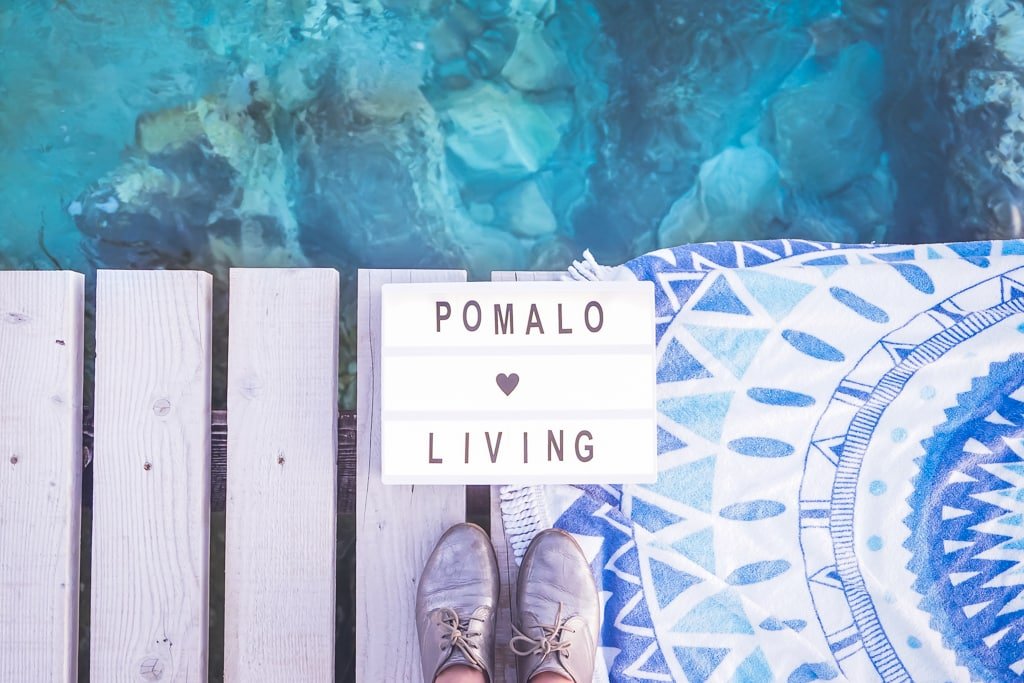 I’m part of a small group of foreigners who actually get to experience Dubrovnik’s pomalo lifestyle. Most tourists see Dubrovnik during peak tourism season, which is quite the opposite of pomalo living. The town is packed with cruise ships and game of thrones fanatics, while locals are killing themselves working 10-hour shifts under the beating sun.

Yet many locals are fairly satisfied with seasonal work, so long as they can enjoy in true pomalo fashion for the rest of the year. The tourism season is seen more as a means to an end.

While winter is slow, it’s the season for picking up a project like building or renovating apartments. That’s the project Domeniko took up this winter, with the help of his dad, a few workers, and my very Pinterest-worthy decorating ideas. The sound of chainsaws, cement machines, and people yelling across the lawn bring me a strange feeling of comfort.

Others take up winter projects like fishing, or even drinking in the local village pub with friends every night. Take it from the guy who took the time to paint a crosswalk connecting his house to the other side of the street last month. Ground breaking.

The point is, during this time, everyone finds something to keep occupied but not TOO busy. People know when to draw the line and turn on the “pomalo”.

Because unlike us Americans who want to “be” somebody, people around here just want to be happy.

Most of my days are spent working on projects of my own, and slowing building a network of friends, both locals and other foreigners. Most of the shops close down for at least part of January, so options for outings around town are limited.

Despite it looking like I’m living the high life on my Instagram, I live a very frugal and simple lifestyle. We rarely go out to eat and do all of our cooking at home. I go hiking with friends and drink wine out of water bottles. The highlight of my day is often taking my lunch break and walking our new dog, Pele.

Though I’m often nostalgic for my big-city life back in Chicago, I do see potential for myself in the midst of the pomalo lifestyle.

Change is a pomalo coming 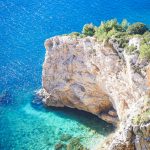 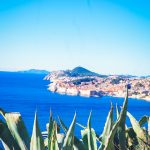 Change is not always welcomed in Dubrovnik. Trends in food, business, and commerce in the U.S and central Europe will likely not come into full swing for another five years here, if at all.

For example, you won’t find restaurants serving many vegan or gluten free options. Many well-established businesses have yet to catch on to the importance of having a proper website and digital marketing strategy. Slowly, but surely, things are beginning to change.

Each year I notice a billboard for a new hotel or villa project. One of the latest projects is the highly controversial complex built on top of  Mount Srd, which will include 400 apartments, 250 villas, and two hotels. Each new modern hotel is juxtaposed against traditional stone houses, some of which are still demolished from the war.

It’s become quite obvious that mass tourism in itself is killing the pomalo way of life. The peak tourist season is no longer sustainable for the town and the local population. (I recently wrote more in depth about this here). You can hear the misery in people’s voices when talking about the upcoming tourism season from May-September.

The tourist board is working on advertising Dubrovnik as a year-round destination and limiting cruise ships. The blessing of being such a beautiful place is that now the town is reliant on the very thing that can also destroy it.

And while not everyone works seasonally in tourism, there’s little incentive to work a traditional 9-5 when starting salaries range from 600-800 euros a month. 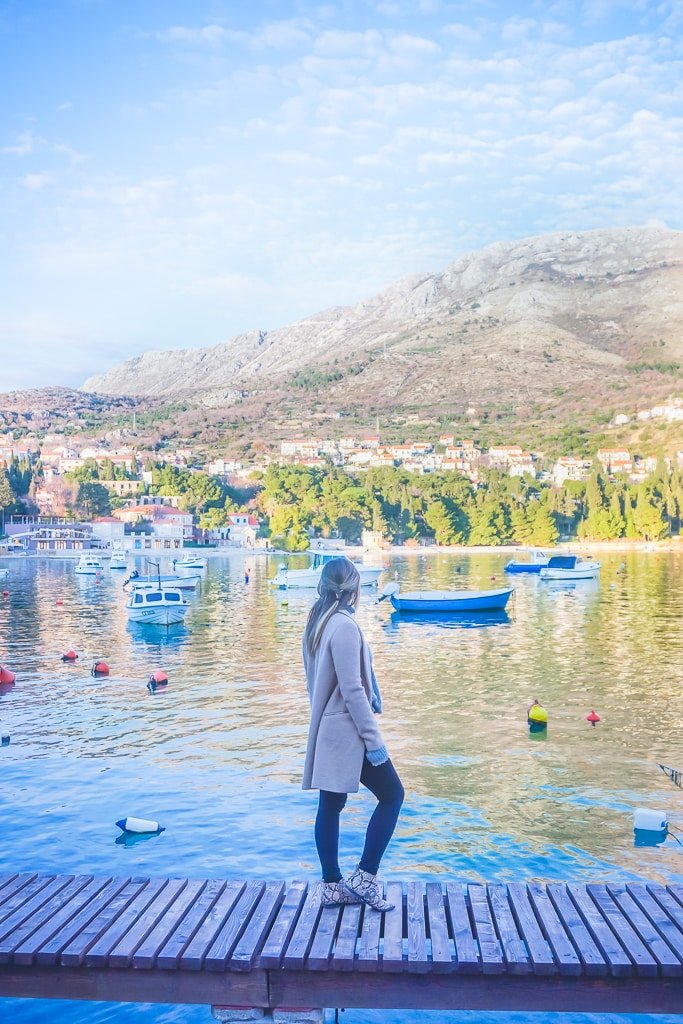 All of this doesn’t go unnoticed to a foreigner like myself. I often have days where I have fits of feeling helpless against the changing tides that I may not agree with. On the other hand, I often feel frustrated with inefficiency. (Though I would probably feel this way to some extend if I was back in U.S right now too.)

While I notice many young Croatians chasing opportunities elsewhere in Europe, they always have a way of coming back. They say that Dubrovnik is safe and ideal for building a life and eventually a family. But most of all, I think it’s the pomalo living that brings them home again.

I guess this is what brought me back too – the mindset and lifestyle that’s given me the opportunity to live a simpler life. Pomalo, but surely.

Keep up with the Dubrovnik Diaries series