Minneapolis Murals: Their Stories And Where to Find Them 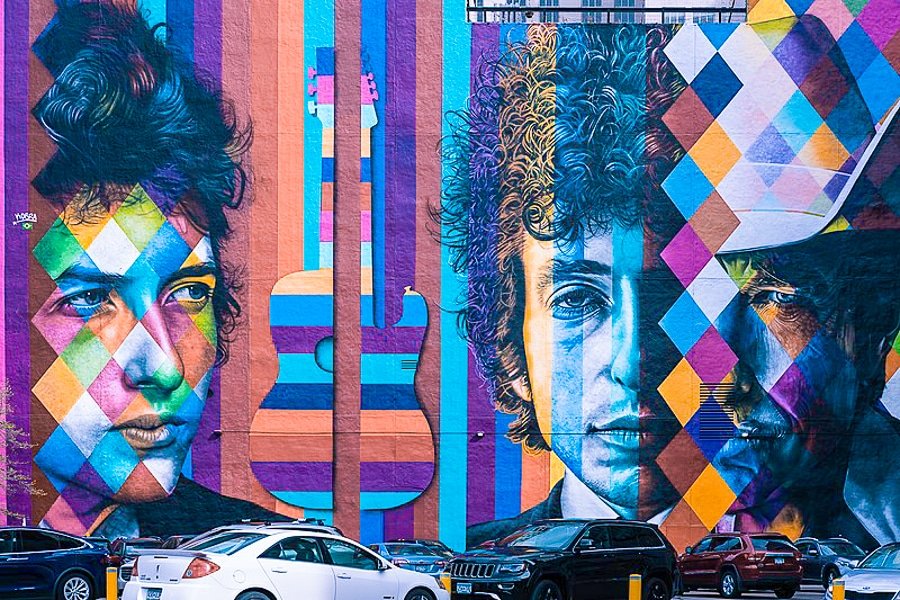 One of my favorite free things to do when I’m back in my hometown is to explore the Minneapolis murals. It’s an interactive way to explore the different neighborhoods of town, and the colorful backdrops are of course ideal for the ‘gram. 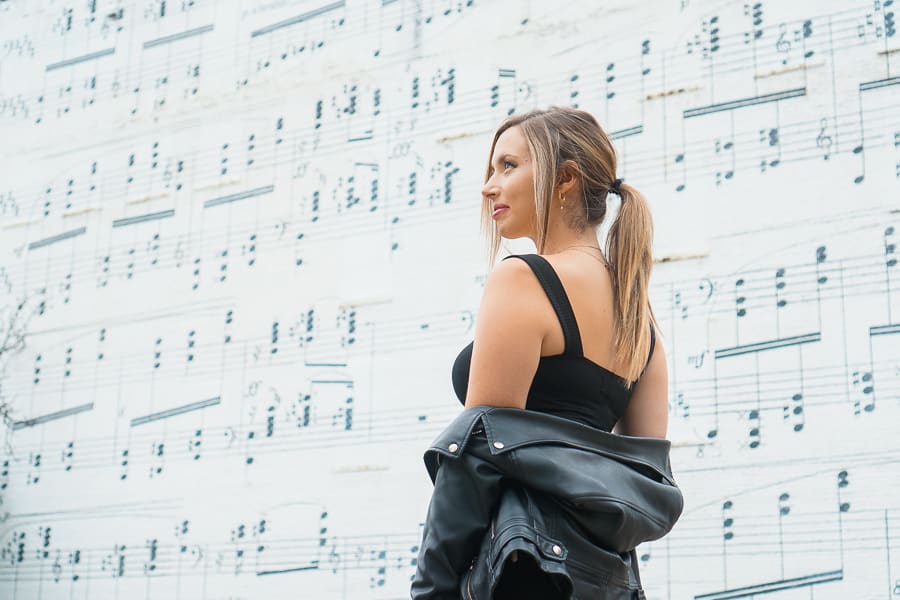 We will start with the murals that are perhaps most known to us Twin-Cities natives: the downtown series of murals. This is an ideal area if you are either walking instead of driving, or are limited on time.

You’ll notice that many of the downtown Minneapolis murals are music themed. One of the most iconic is the Schmitt music wall, which displays a massive black and white piano piece across the entire brick wall.

The building used to be the former Schmitt Music headquarters in the 1970s. After a columnist for the Star Tribune called the previously exposed brick wall ugly, they decided to put up a French piano piece, one of the hardest to actually play! It then was featured in Time Magazine and became known around the world. 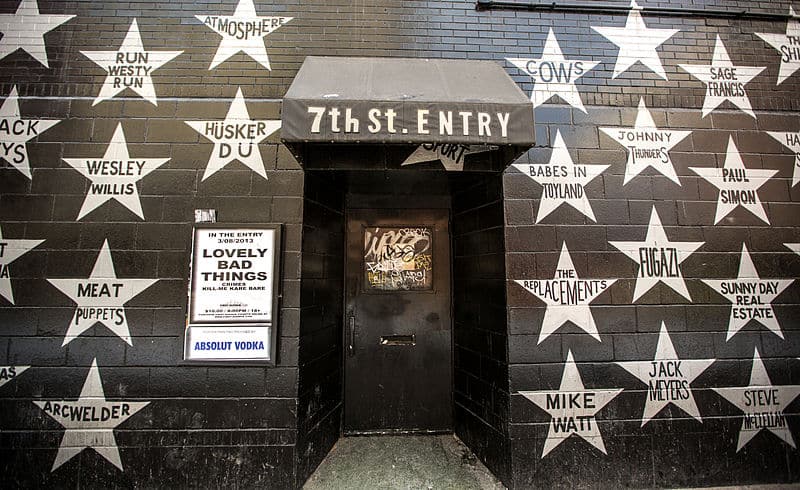 If only this wall could tell stories of the legendary musicians and how the various concert crowds have evolved over the years. First Avenue and 7th street entry is the most famous music hall in Minneapolis, and probably all of Minnesota. The venue became famous in the 1980’s when Prince performed here regularly, which was also in his movie Purple Rain. Even though it’s a relatively small venue, basically any band that is relevant plays here when they come through town.

The stars show the different artists that have played here over the years, and is a reminder how important music is to the culture and arts of Minneapolis today.

Speaking of music, did you know that Bob Dylan was also from Minnesota? If you’re Minnesotan like me, of course you do. He originally had roots in Minneapolis before getting big, and then later owned the Orpheum Theatre on Hennepin Avenue.

In 2015 the building owner invested $50,000 into this 60 feet tall art installation to “revitalize it’s downtown cultural district”, as the Star Tribune puts it.

The mural features a music lyric that says “Times are a changin’”, with three images of Bob Dylan ranging from his younger and older self.

This is perhaps the most lesser-known mural in the downtown area, and it is one of my personal favorites in the city. The mural is a vintage comic strip that reads “Take a picture sweetie- I ain’t got time to waste… baby I’m a star!” For those of you die-hard fans, you know that this is a lyrics of Prince, another artist we like to brag about.

The vintage mural came to life after the aforementioned Bob Dylan wall, and can be seen as a way of further bringing the downtown area to life. The artist, Greg Gossel, painted this as part of a national campaign for small business Saturday. 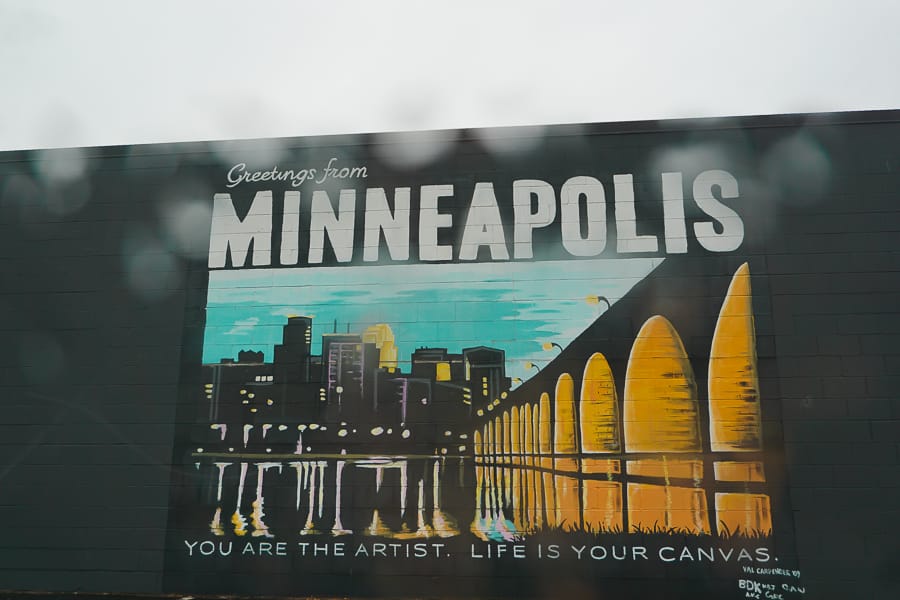 As NE Minneapolis is now the new uptown, aka the hottest neighborhood to gentrify live, it’s no surprise that such a crucial mural would be located here. There is not much information on the story behind the mural, other than it’s of the most famous view of Minneapolis, located in Northeast along St. Anthony Main.

Talk about tactful advertising. This wall is the storefront of the I Like You Store in Northeast Minneapolis, and it was created for the reason of attracting customers to shop local. The store is home to over 200 local and independent artists, selling just about any Minneapolis or Minnesota swag that you may need. 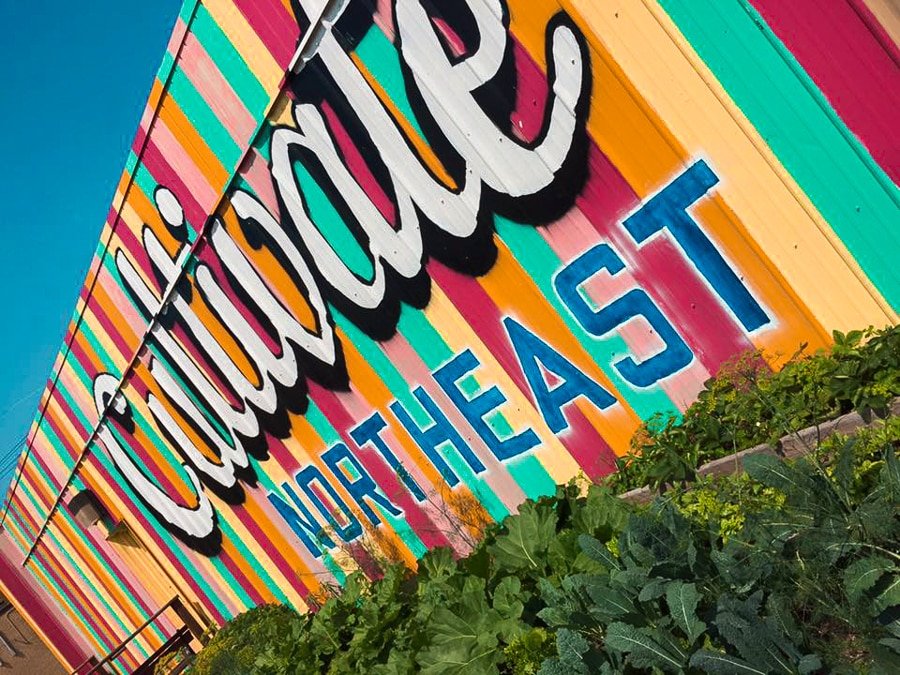 The urban agriculture movement is alive and well in Minneapolis. Neighborhoods are spotted with farm-to-table restaurants and community gardens or rooftops. Cultivate Northeast is a community garden in Northeast that also organizes community clean ups and events to bring the community together. The mural and the fresh produce are a lively addition to the growing neighborhood. 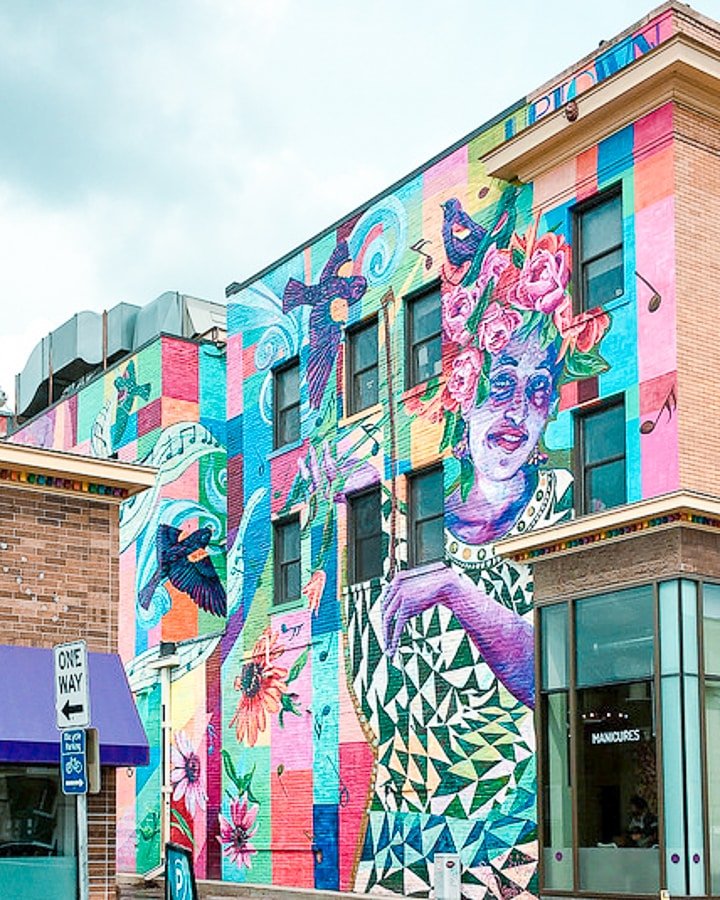 This kaleidoscope mural brightens up the center of uptown, even on the dreariest of Minnesota days. Designed by Greta McLain as a part of the Good Space Murals project, the rainbow wall features a picture of an unknown woman giving serious Frida Kahlo vibes. The project required a great deal of community fundraising to complete the project, which is now one of the main attractions to the Uptown area.

When Prince died back in 2016, a part of Minneapolis died along with him. As you can tell from the other references to Prince in other murals, he played a huge part in shaping the city, particularly the vibrant music culture.

Rock Martinez painted the Prince mural as a mourning present to the city of Minneapolis. In an interview the The Current, Martinez stated, ““I thought this would be a nice present to Minneapolis and Uptown to help with grieving,” he says. “Minneapolis is hurting, the world is hurting. We’re losing a legend of art and music.”

Prince has evolved to be much more than just a music legend to the Twin Cities. Locals have immortalized him in a sense, where he is often seen as a cultural God to the cities. 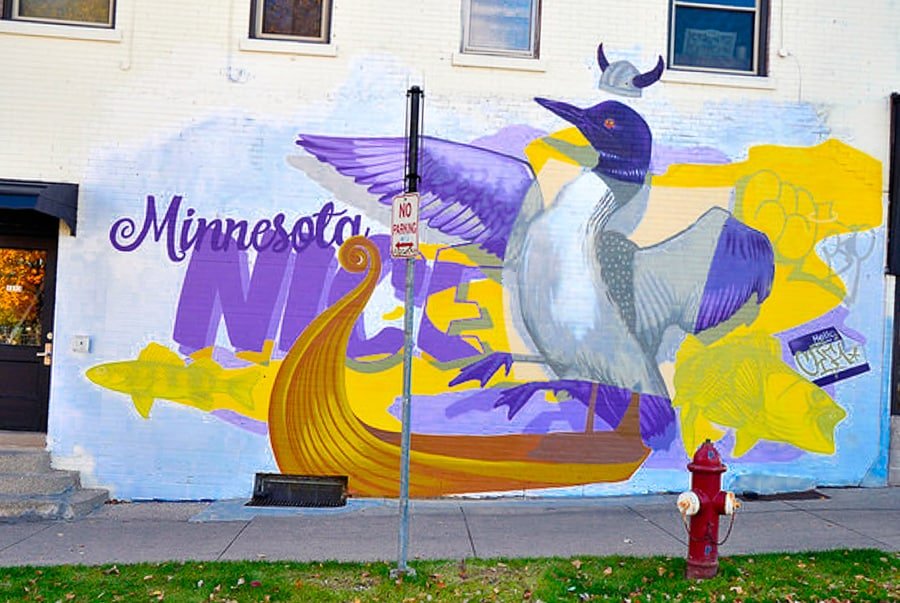 The winter temperatures might be pretty cold, but generally Minnesotans are quite warm. This is why we’ve gained a reputation as “Minnesota nice” for being smiley, friendly neighbors, even though everyone hates confrontation and is actually quite cliquey. I digress.

Regardless, this mural screams “Minnesota pride”, with our state bird, the loon, in a Vikings hat and boat. In case you haven’t heard, Minnesotans are quite passionate about our Vikings football team, even though they seem to let us down every year. There’s also a fish on it because in the land of 10,000 lakes, you guessed it, people love to fish! This mural was also by Rock Martinez. 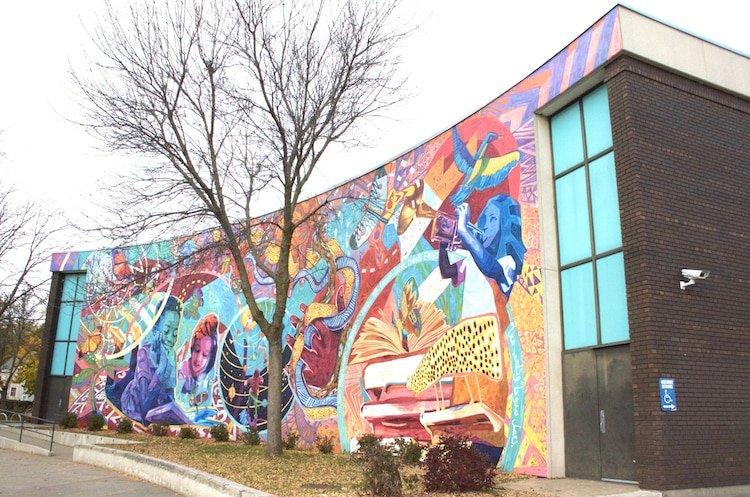 The Lyndale School Mural is perhaps one of the best examples of how murals can be an educational and community-building tool. Also initiated by the Good Mural Project, school children and community members helped develop this mural to be a reflection of what they love most about their community.

This particular community is heavily populated with Minnesota’s large Somali population, so the artist worked with the Somali Museum to draw inspiration from Somali arts. The school children painted the mural during art class, and the result was one mural bringing together an entire community.

There are also several murals on the other side of town in St. Paul, but those deserve an entire post of their own next time I’m in town. Until then, check out this Flickr account of all the street art across Minneapolis.

If you would like to contribute or recommend a mural to be added to this post, please send a short description and a vertical photo to themindfulmermaidblog@gmail.com. 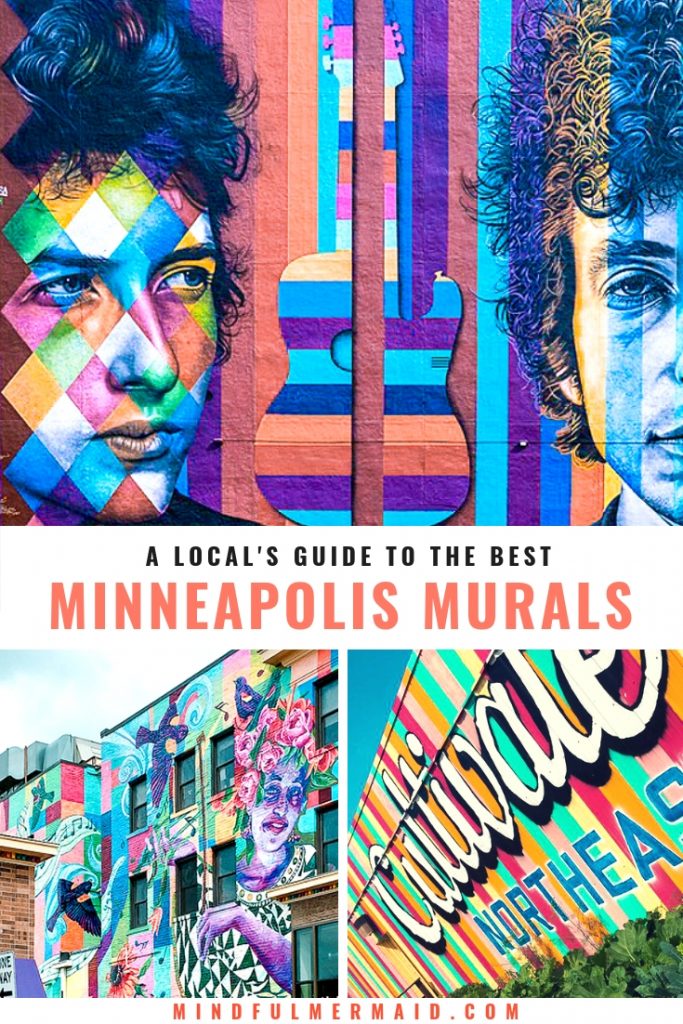 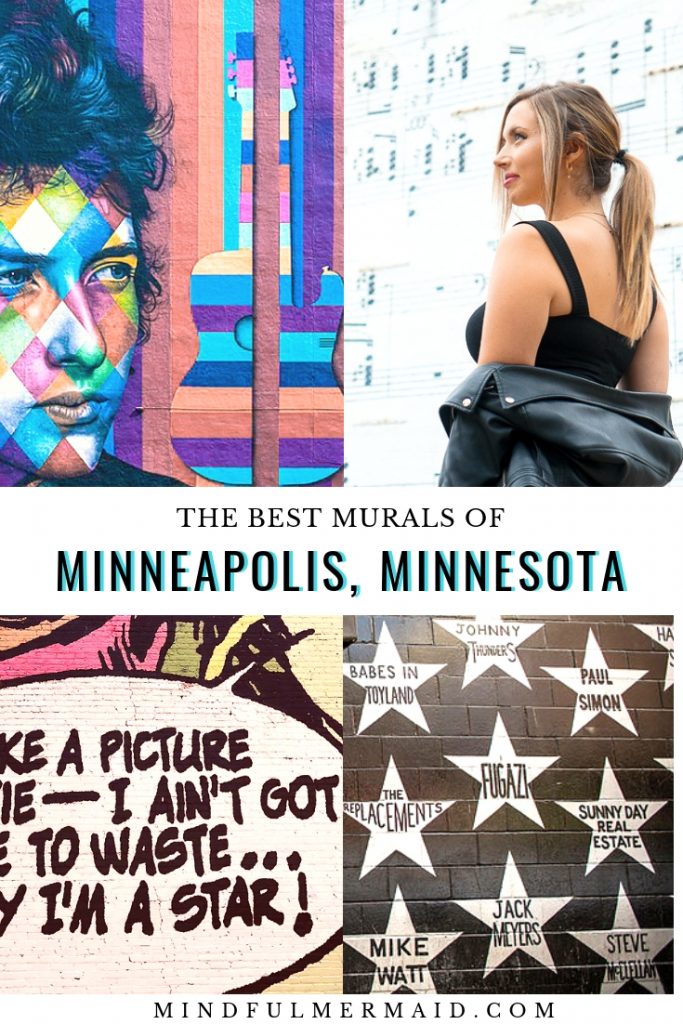 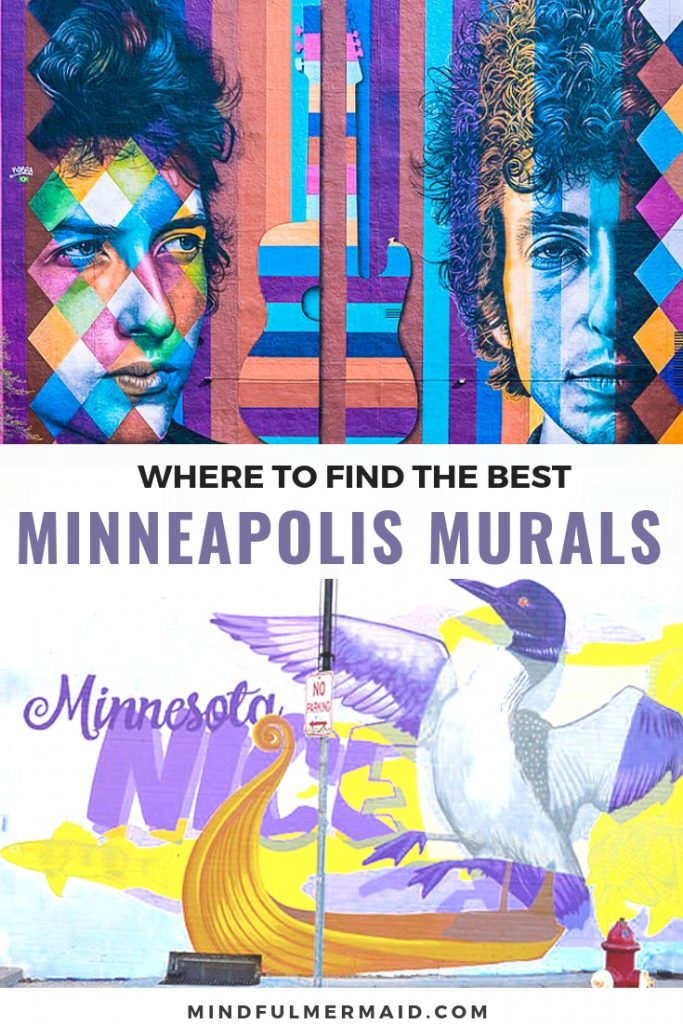