Annecy, France: A Photo Diary of the Venice of the Alps 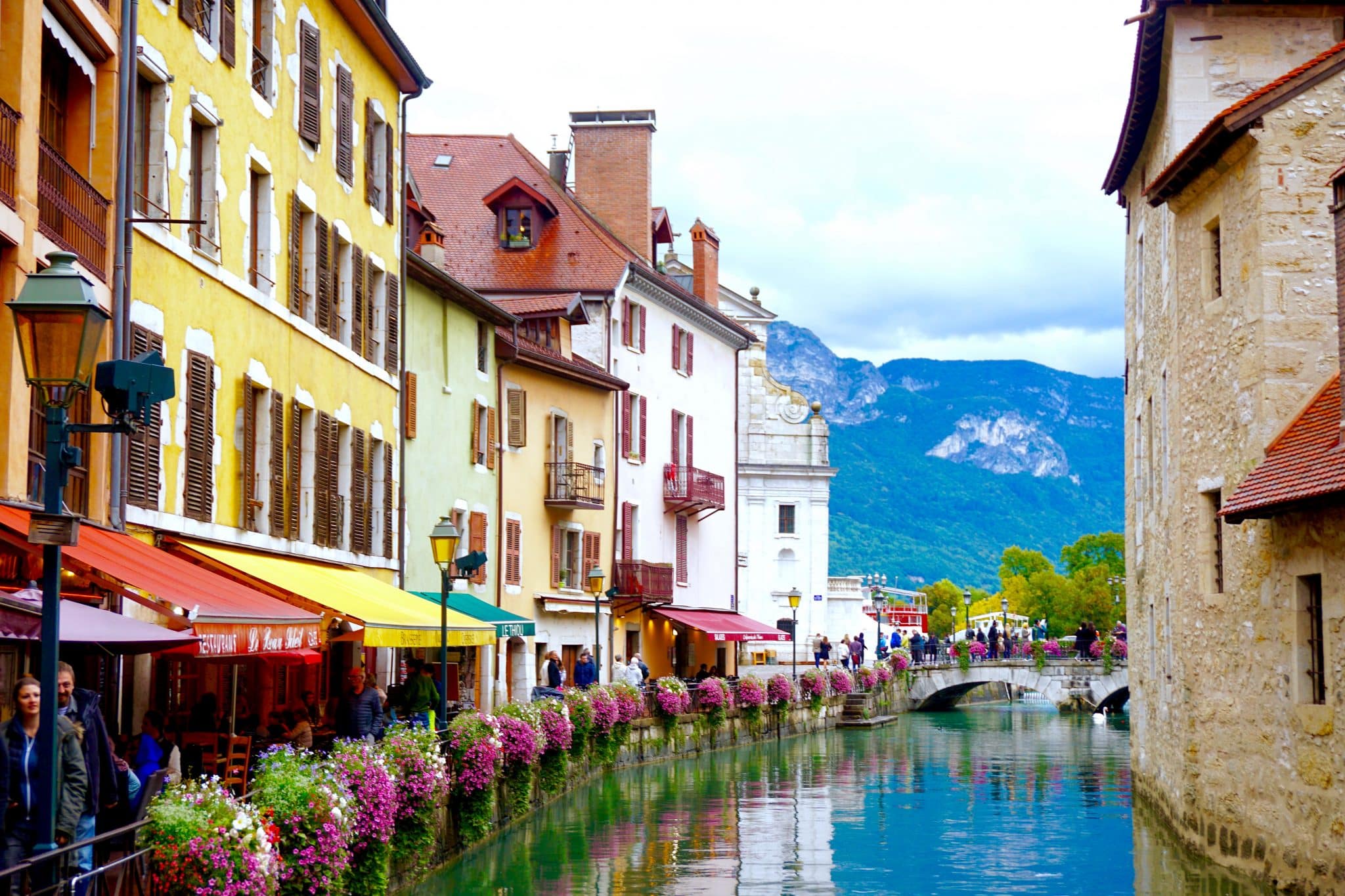 Tucked away in the French Alps along Lake Annecy is perhaps one of the most charming small towns in all of Europe. Also know as the Venice of the Alps, Annecy, France is living proof that storybook towns still exist today.

I stumbled upon this gem while looking for day trips to take during my recent trip to Geneva, Switzerland. And not even a massive hangover from a weird night of karaoke, a friend with a forgotten passport, or a thunderstorm were going to stop me.

Pin it for later travels: 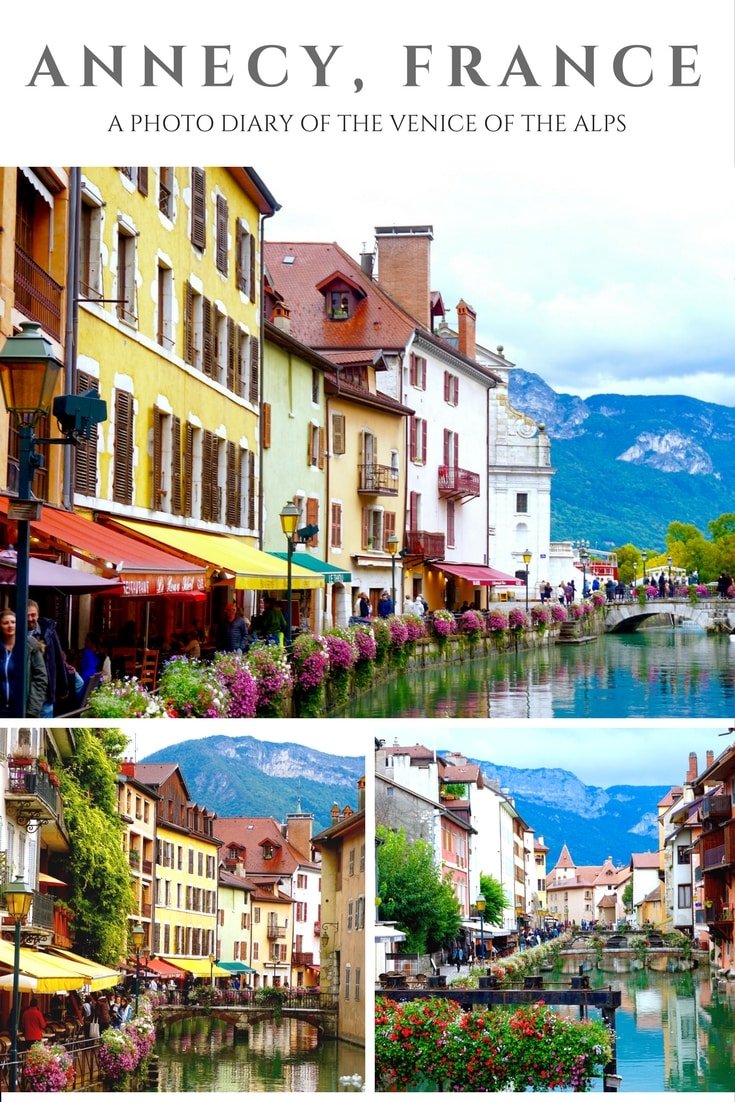 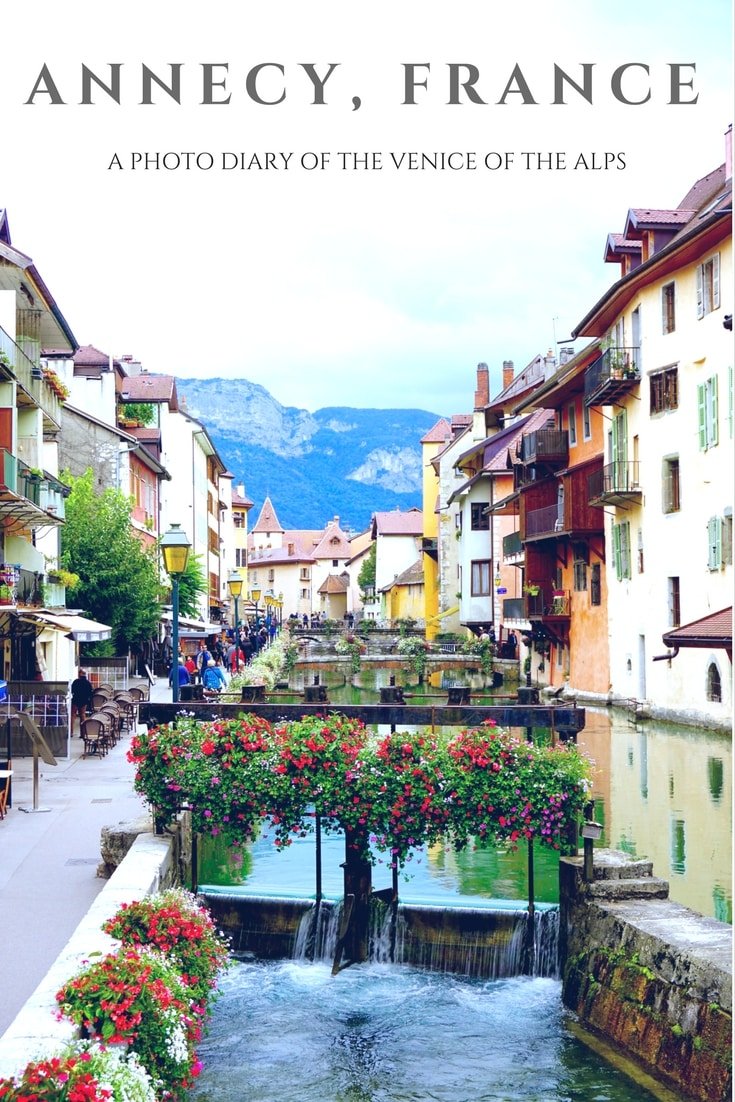 *disclaimer: this post contains affiliate links. At no extra cost to you, I make a percentage off of any of the tours you book to help cover the costs of running my website.

The Venice of the Alps

I’ll admit that I was originally bummed when the forecast predicted rain. However, I came to realize that unlike many places, rain did not take away from the charm of Annecy. Instead, the clouds cloaked the town in an idyllic haze that made it feel all the more surreal. 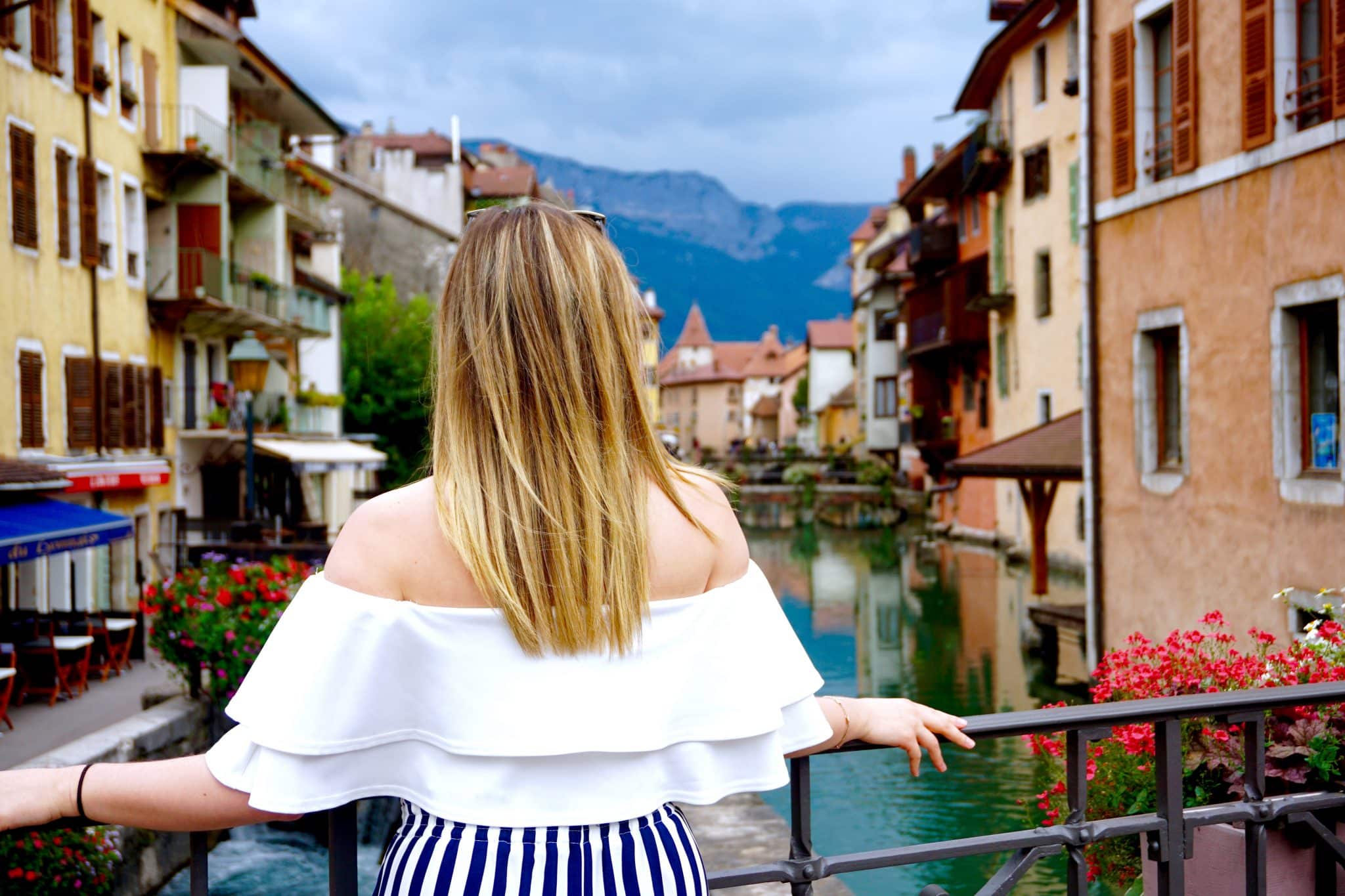 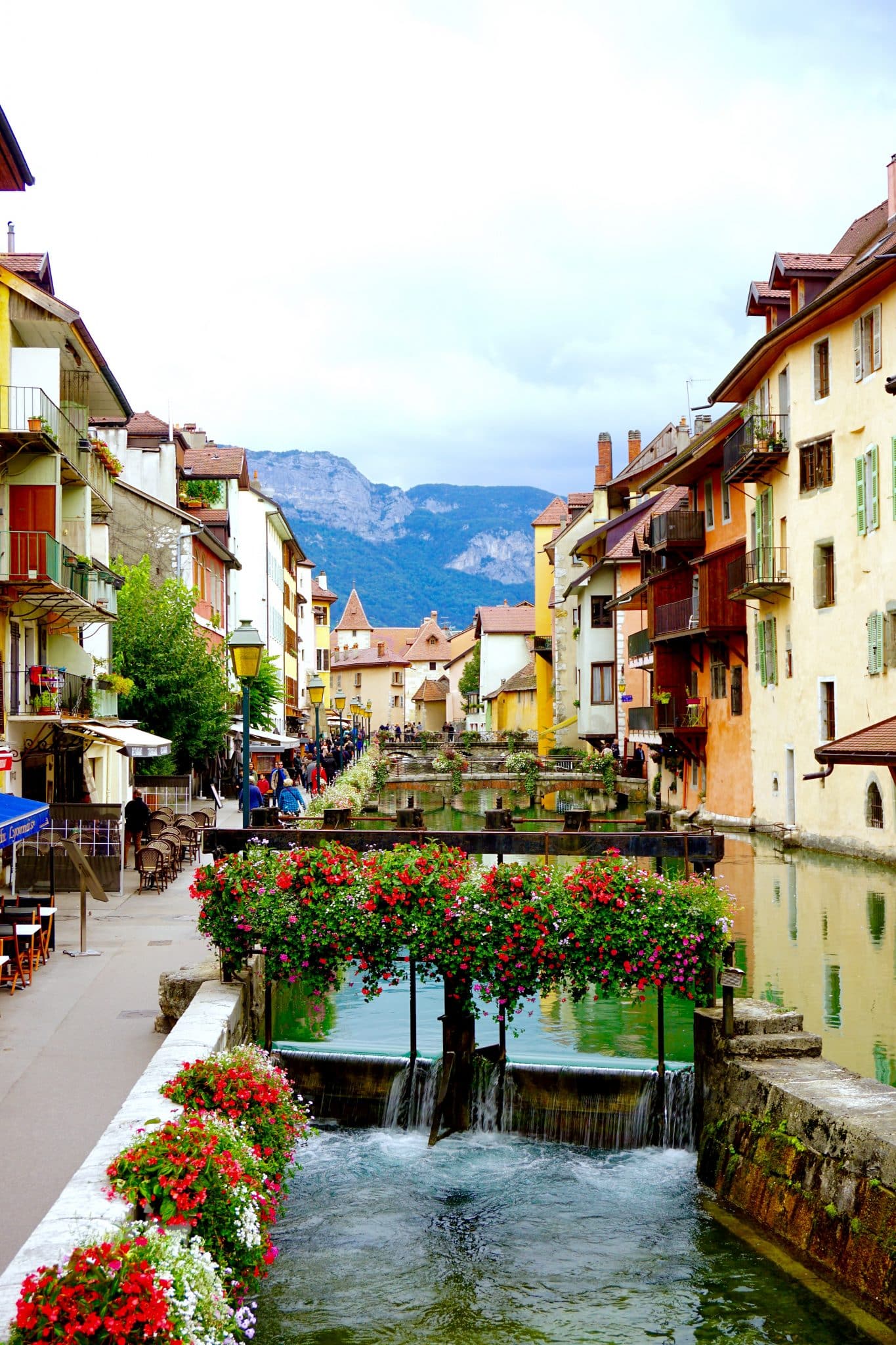 The Thiou River weaves through the Old Town’s pastel colored buildings. Canals are spotted with coffee bars, gift shops, and crepe and gelato vendors. We came hungry, which was a mistake on a Sunday afternoon when many restaurants were already closed. Though it was an inconvenience for us, I admired that locals didn’t let tourists completely run the place (at least during September).

I was able to practice some of my French with shopkeepers, waiters, and even a few French men in a bar. Everyone was very respectful that I was at least trying, even though I was rusty. In fact, one of the (noticeably intoxicated) French men in the bar ran outside and came back handing us hand-picked flowers and said, “Bienvenue en France mes amis!” Talk about a grand welcome! 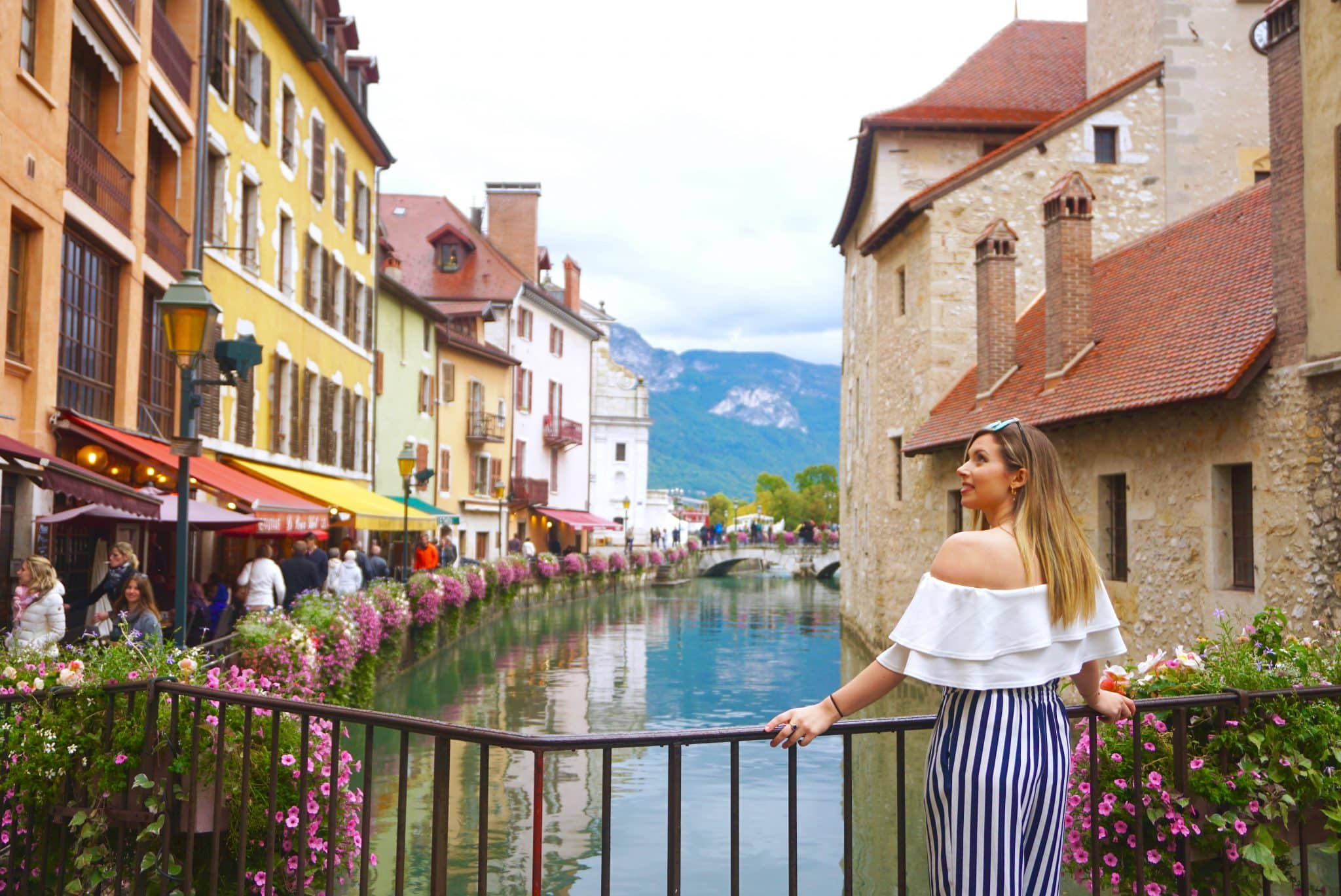 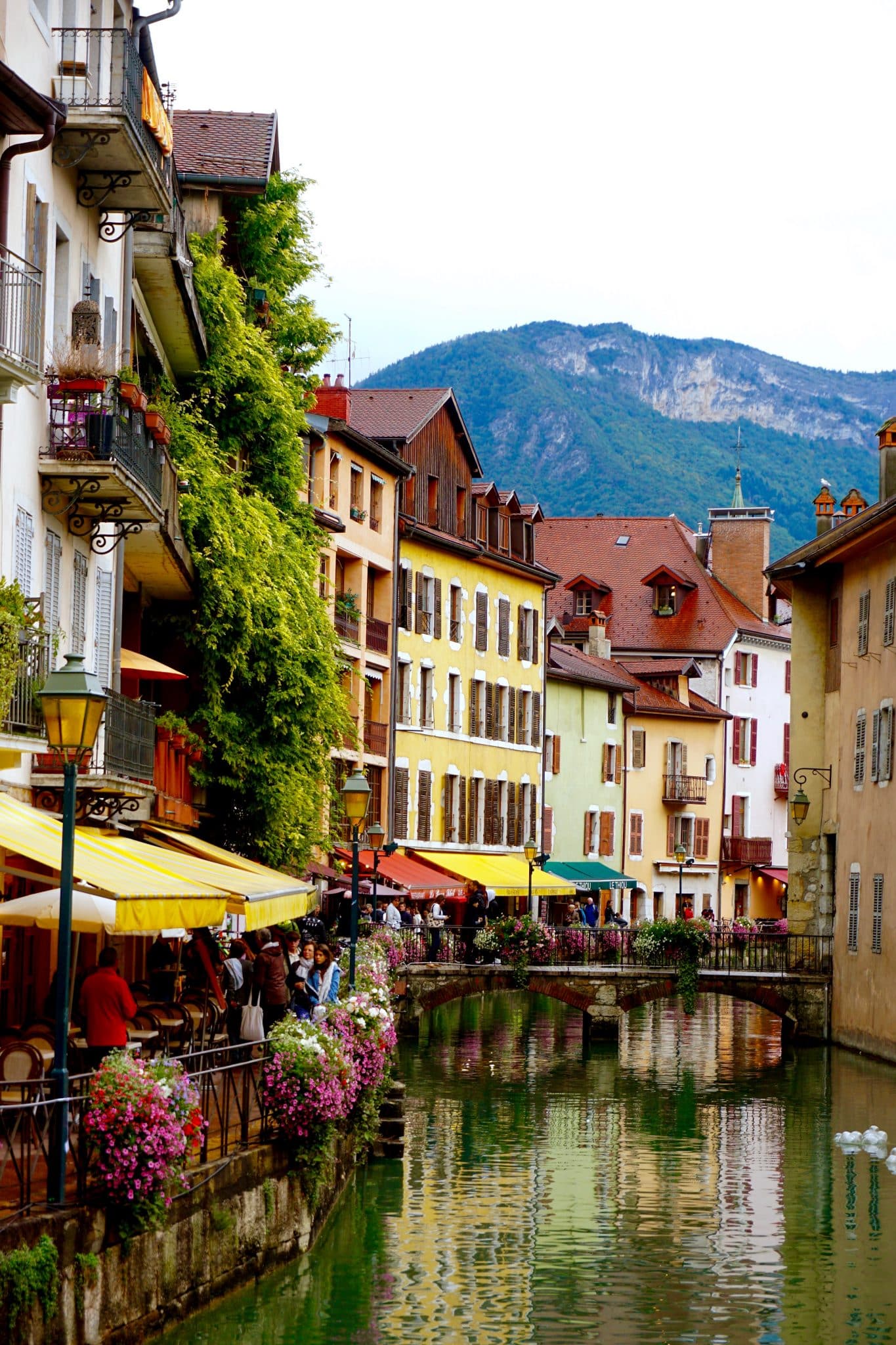 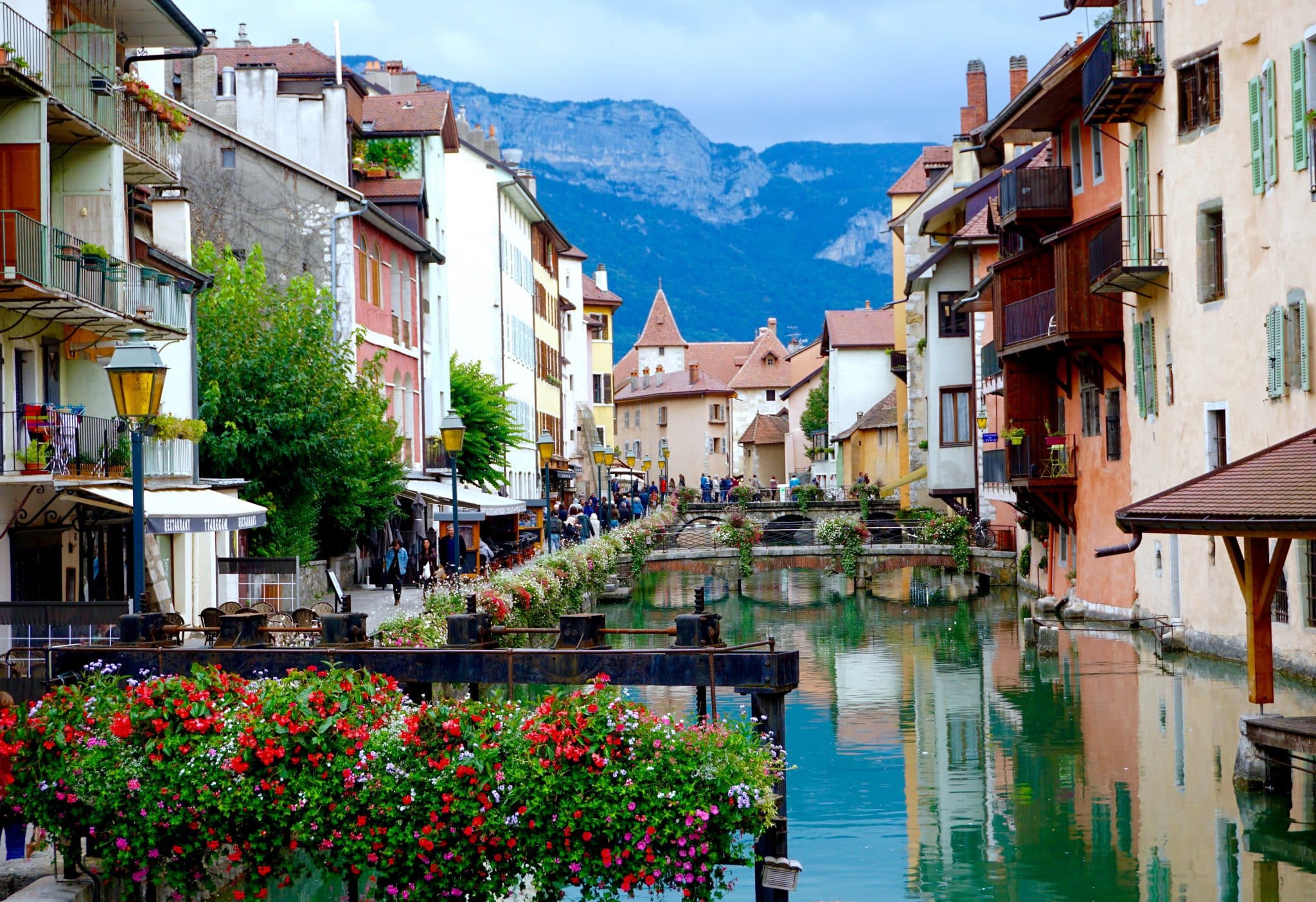 There was several times that I felt like I was back in Venice instead. But if I had to choose between Venice and Annecy, I would choose the latter. Annecy had all the canal charm but also with an unbeatable natural landscape. Sadly, we couldn’t see too much of the lake from the fog. But Lake Annecy looks like a combination of Europe and Asia in person.

READ MORE:   How to Travel with Student Debt (Travel Bloggers Tell All) 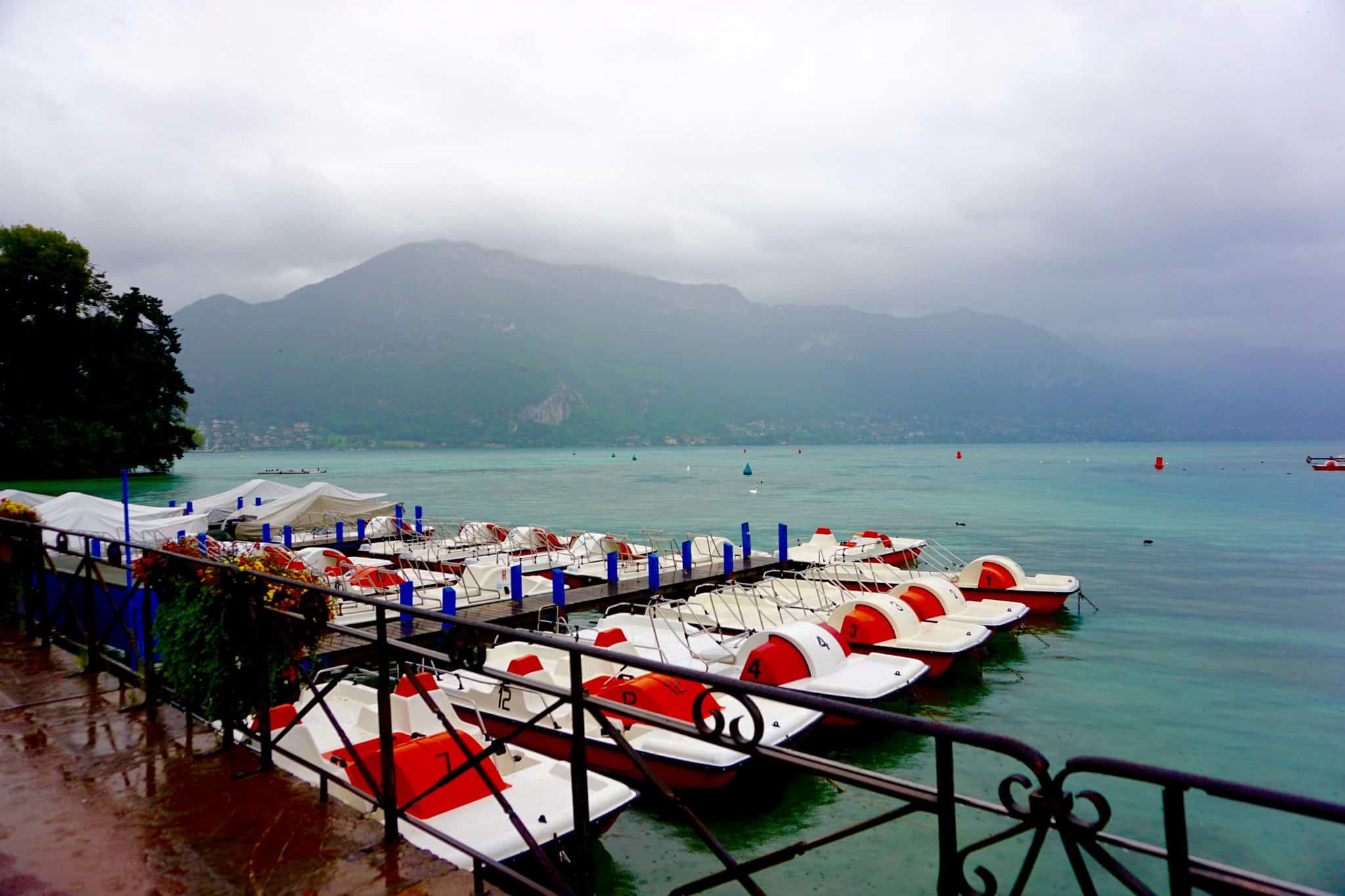 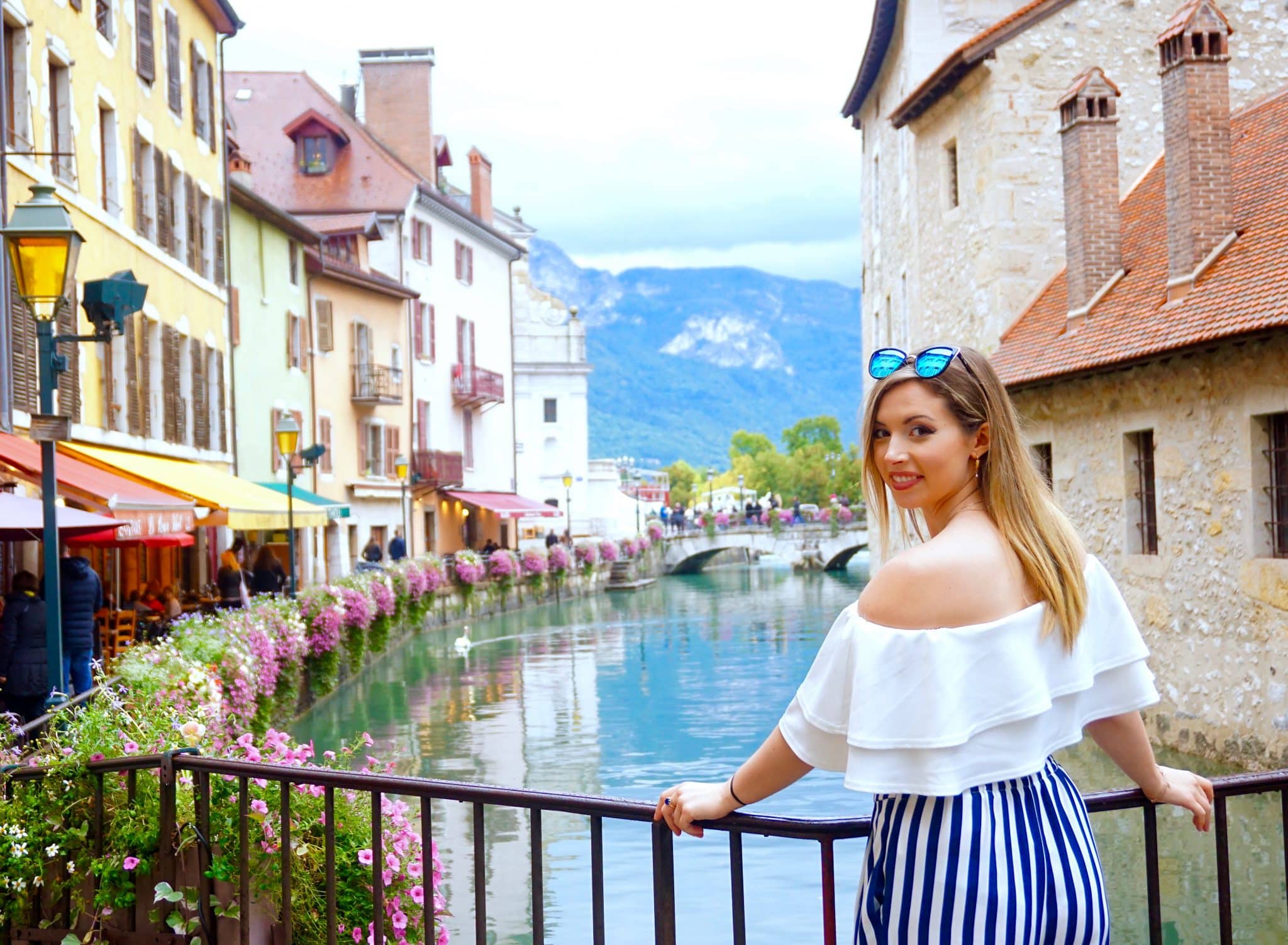 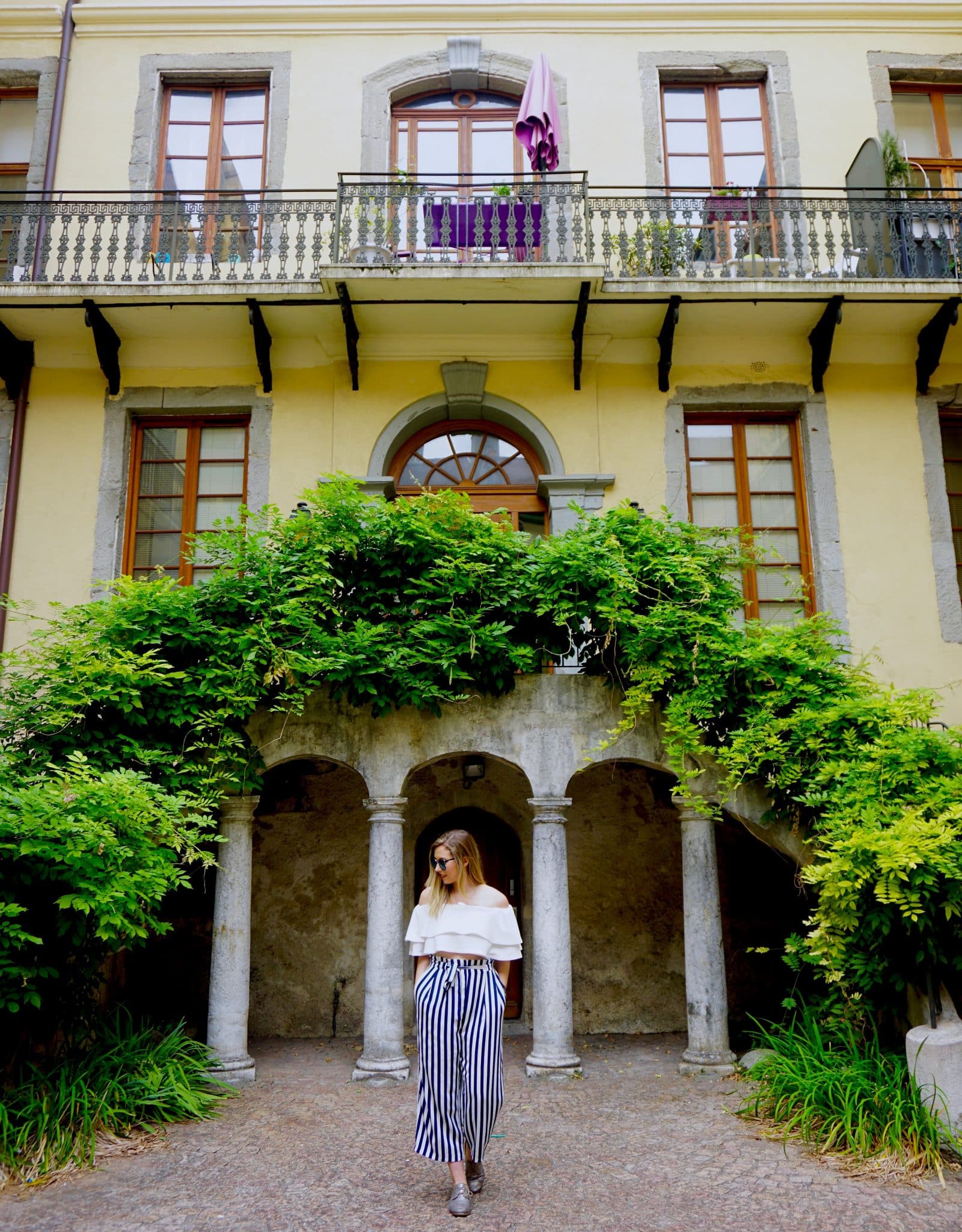 Anyone looking for a quant day trip or a hidden romantic getaway in Europe, Annecy should be at the top of your list. I’m looking forward to going back sometime when the weather is a bit warmer to experience all that the Venice of the Alps has to offer.

How to get to Annecy, France from Geneva 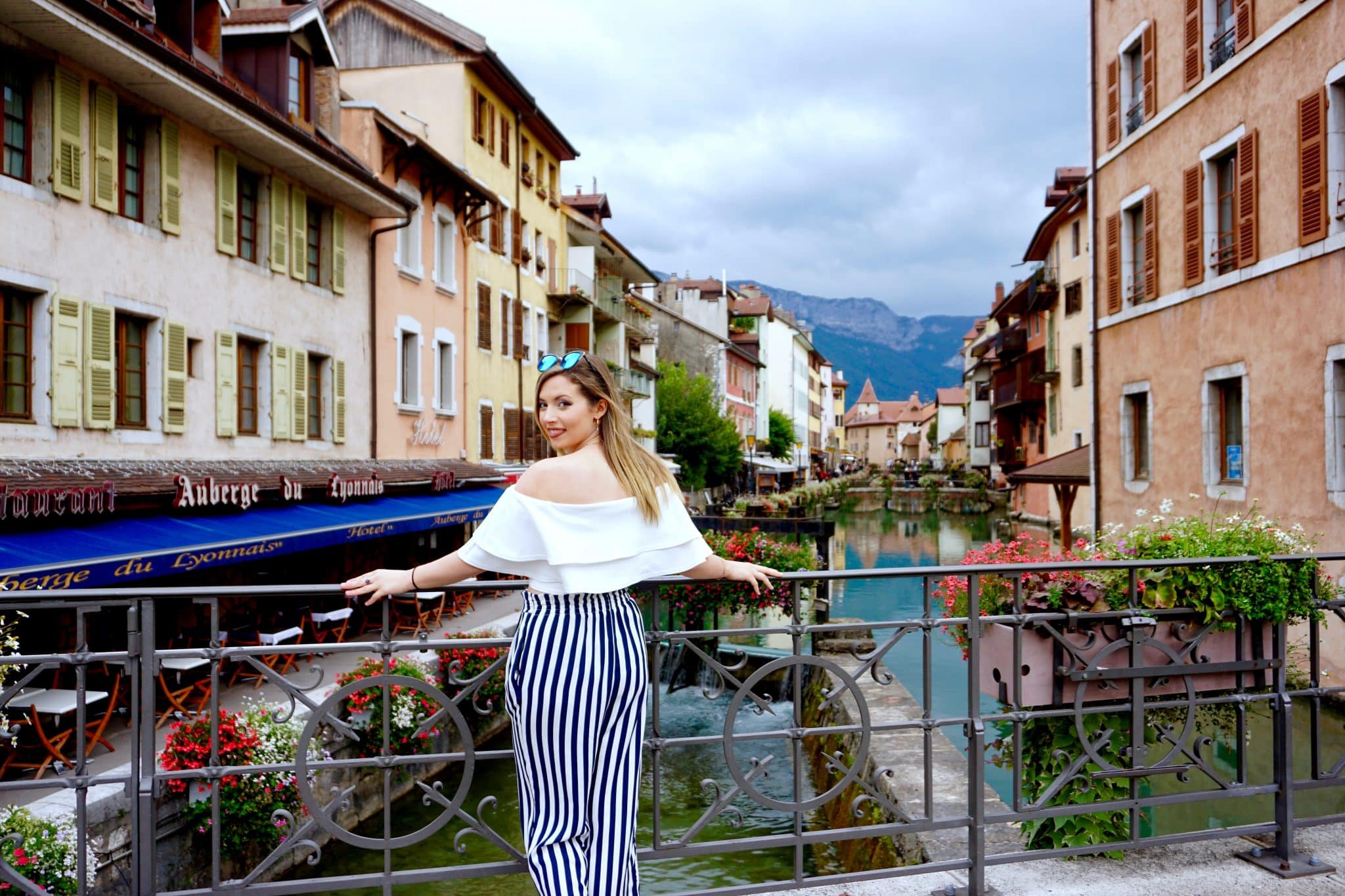 There are many ways to get to Annecy from Geneva,  including organized tours, local and private buses. I came via a local bus from Geneva, but to be honest, it was really confusing, even with my local friend. In retrospect, I would have planned a tour on my own without my own car. (There aren’t any trains to Annecy.)

Also, there are a number of French buses going to Annecy from other French towns like Lyon or Marseille. If you’re crossing the border from Switzerland, don’t forget to bring your passport to get into France!