5 Reasons to Spend Christmas in Dubrovnik 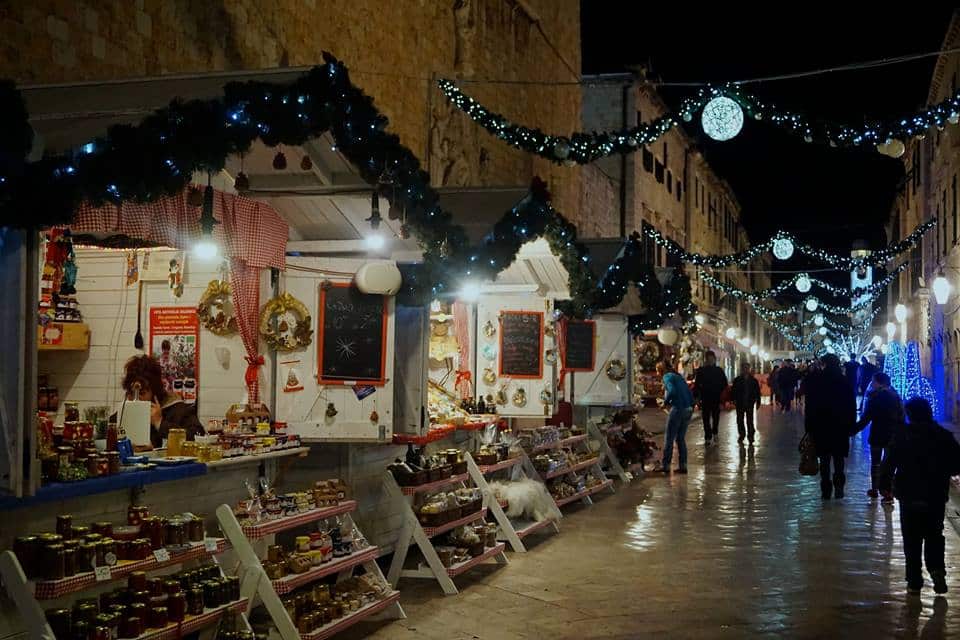 While most associate Dubrovnik with the summer, the authentic spirit within the winter months cannot be found in peak tourism season. You won’t find the Old Town surrounded by cruise ships. You won’t find the Stradun congested with tourists and selfie sticks. You won’t be overwhelmed with restaurants and cafes at every corner. Instead you’ll be able to spot the actual Dubrovnik locals, sipping espresso with friends. The Stradun is now actually walkable, illuminated and draped with Christmas lights. It’s suddenly easier to feel the unique Dubrovnik energy, which is often lost in the masses.

Here are five reasons to spend Christmas in Dubrovnik

Now with the Dubrovnik advent Christmas festival, the Old Town is even more alive. The Stradun is spotted with decorative Christmas houses, while locals and tourists bundled up drinking beer and hot wine while eating sausages.

Over the past three years, the festival continues to expand. This year the Christmas houses even trickled into the Old Town’s side streets, and outside of the Pile Gate. The advent features several Christmas concerts and events, and even live music along the Stradun (here is a list of Christmas festival events).

While some locals complain about the Christmas festival, it truly has brought the Old Town to life, where before the Stradun was deserted in December. As you can see in the video I made, the festival is heart-warming from day to night. 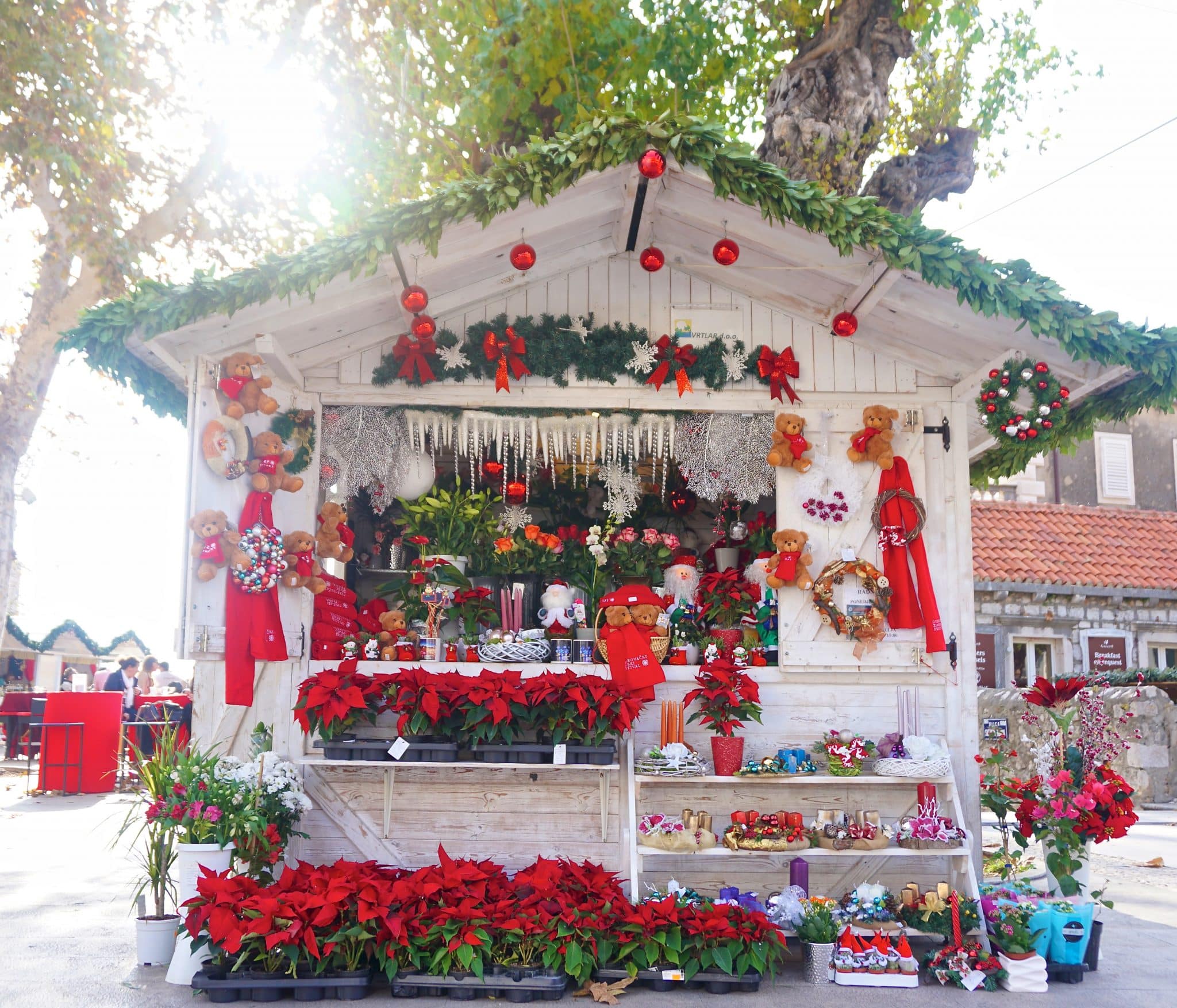 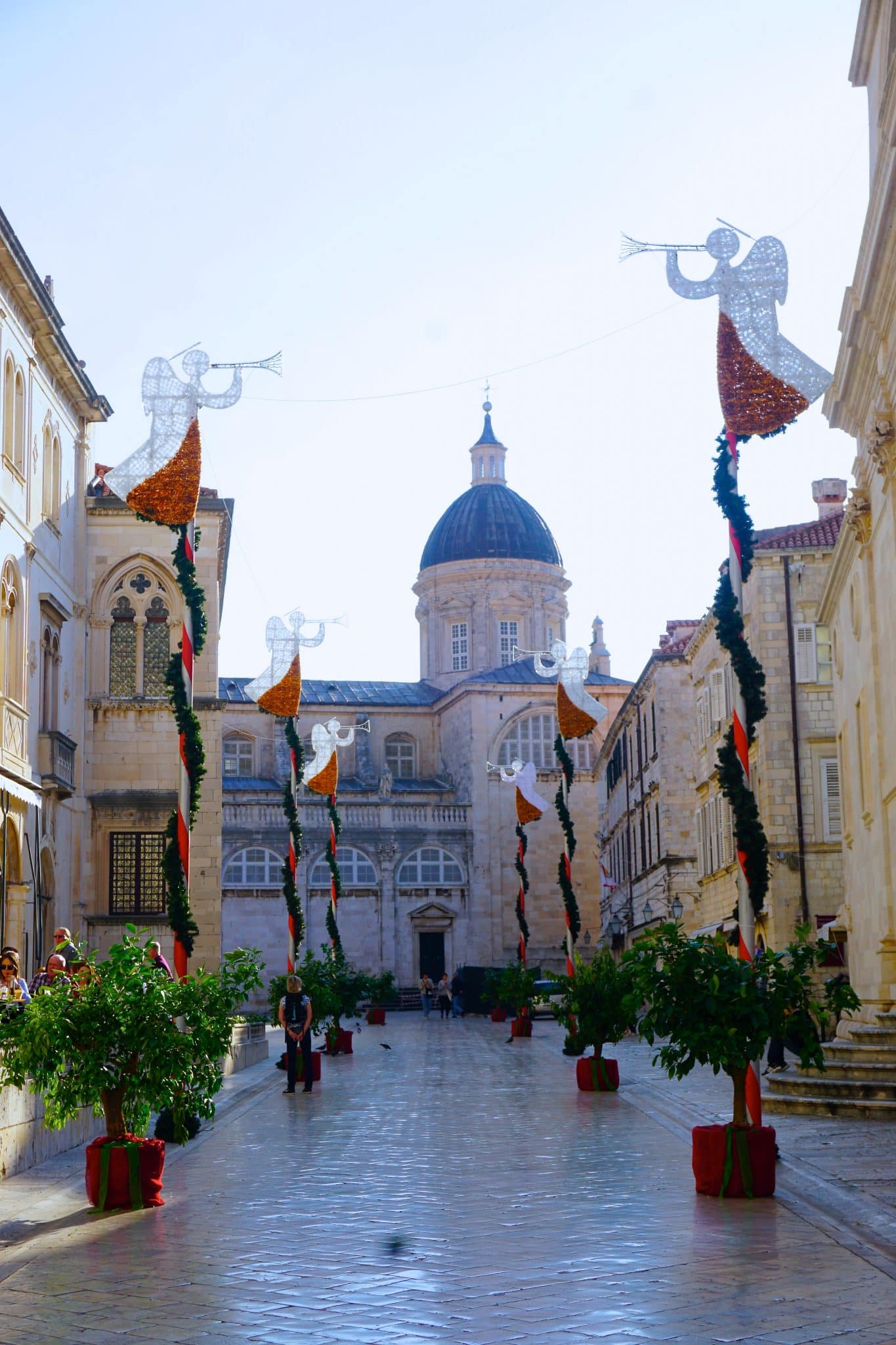 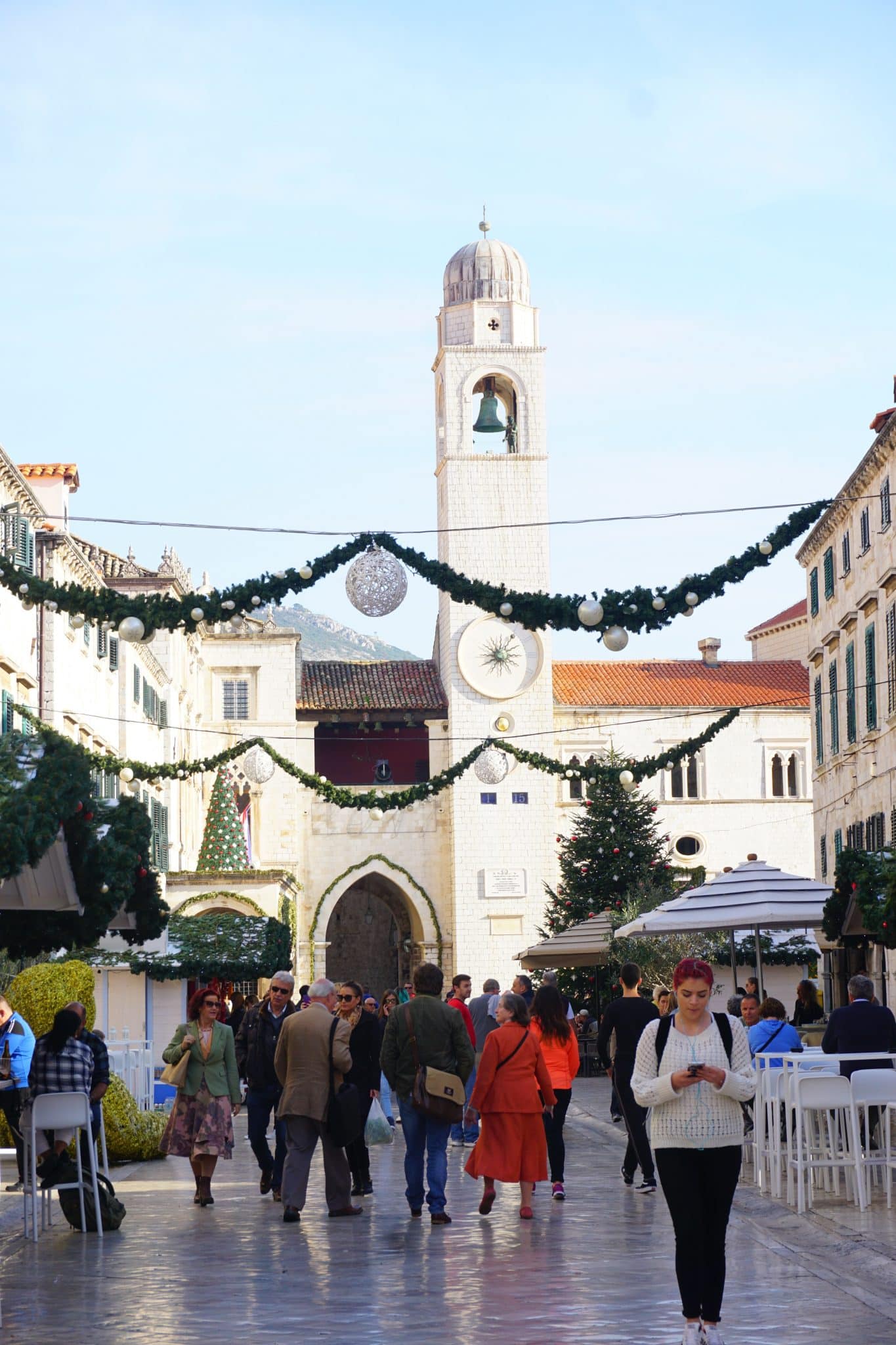 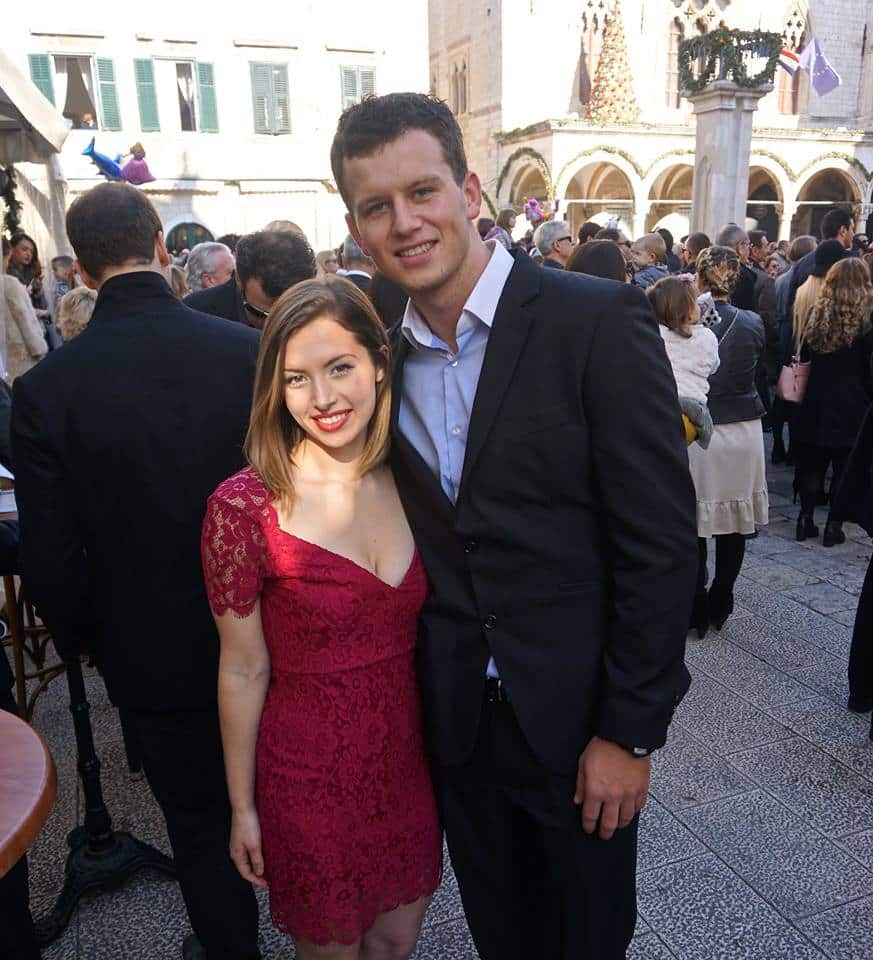 Last year I spent my first Christmas away from home, however, I wouldn’t have wanted to spend it anywhere else. As majority of the Croatian population is Catholic, Christmas is without a doubt the biggest celebratory holiday of the year, and the whole town turns into one big family.

The festivities truly begin on Christmas Eve, a celebration the Croatians refer to as Badnjak. This is the one day of the year where everyone dresses in the nicest dresses and suites, heads into the Old Town to attend a Catholic mass, and drinks together all afternoon. In the evening, locals go from house to house with close friends, drinking and eating even more.

As a foreigner who has lived in Dubrovnik for almost a year in total, easily I can say Badnjak is one of the richest cultural experiences. To see the old town filled with locals, instead of tourists, brings Dubrovnik to life. I felt incredibly welcomed by the community, because they were so happy to have an American celebrating the holiday with them. I also did spot a few other travelers, who seemed to be enjoying themselves as well.

Christmas in Dubrovnik was truly an experience I will never forget.

Dubrovnik locals cringe as they watch prices hike during peak season. Meanwhile, tourists never realize that they’re paying 3 times as much as they really should.

During the winter months, prices at cafes, restaurants, and grocery stores go back down again. If you’re a budget traveler, this means you can see much more of Dubrovnik, instead of spending an entire day’s budget on one meal.

Additionally, you’ll find that many of the extremely touristy souvenir shops and restaurants have closed. Many authentic restaurants where locals frequent stay open for the Christmastime.

Though locals love to dress up year-round, the unique Dubrovnik style is further highlighted in the winter months. Women wear knee-high boots with leather pants and a fur jacket, while men wear straight leg jeans, sweaters, and pea coats. It’s also popular to wear pants with a crop top, or a sweater dress, tights and a leather jacket.
If you like to dress up in the winter, Dubrovnik is perfect. The weather is still relatively mild, making it perfect to sport those Pinterest-worthy layers, which are never warm enough in sub-zero temperatures. Even if you’re more casual yourself, it’s still fun seeing what locals wear. Without the Stradun being so congested, you could sit for a coffee and have a front row seat at the Dubrovnik fashion show. I personally love to dress up and show a little holiday spirit.

Lastly and most importantly, spending Christmas in Dubrovnik will help spread tourism throughout the year. This past summer season of 2016, over a million tourists visited Dubrovnik. Meanwhile, there are only 42 thousand locals in the area. Dubrovnik, and Croatia in general, needs tourism without a doubt. Yet, I’m fearful that the influx of tourists in summer months is reaching its height carrying capacity.

Visiting in the winter months means there’s a better tourist to local ratio. You’re much more likely to actually talk to locals, instead of being surrounded by tourists who know just as much about the city as you do.

Getting to Dubrovnik in winter is a bit more challenging, as there are less flights, buses and tours. Yet if you’re planning a holiday getaway or looking for somewhere to visit in Europe over Christmas, coming to Dubrovnik is worth every penny.

I first feel in love with Dubrovnik during the winter months, and I wish more travelers would be able to have the experience that I had. I felt like I had the whole Old Town to myself, and I actually met locals. I had time to soak up the Dubrovnik mentality, without the overbearing tourism marketing.

I promise you’ll keep warm with the Dubrovnik spirit. 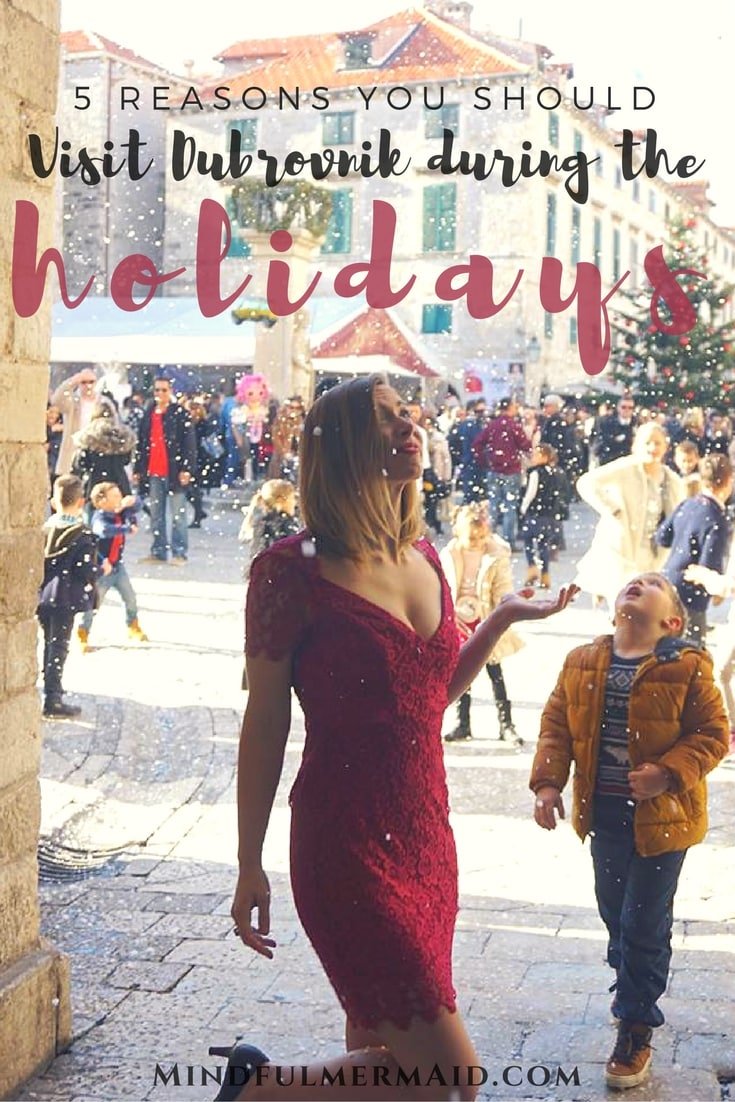